Visa is reportedly looking to raise fees for some merchants, and Apple's Chinese supply chain is expected to resume production next week.

The Dow Jones Industrial Average staged an encore performance on Tuesday, rising sharply in morning trading. The Dow was up 1.55% at 10:55 a.m. EST, even as the coronavirus outbreak in China continued to spread.

Shares of Visa (V -0.98%) rose with the market following a report that the payments company was planning big changes to its fee structure. Apple (AAPL -1.51%) stock was up strongly as well, with news that Chinese suppliers plan on resuming production next week, helping the cause.

In an effort to drive usage, replace checks, and adapt to newer businesses like ride-hailing services, payments giant Visa is reportedly planning a substantial change to the fees it charges U.S. merchants. Rates will decrease for some types of merchants while increasing for others, according to a report from Bloomberg. 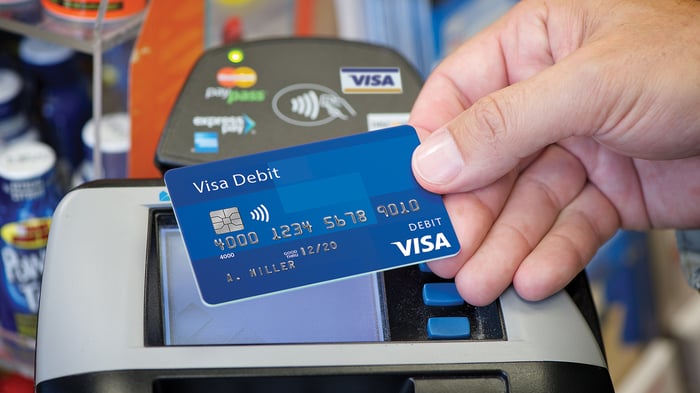 "The U.S. credit interchange structure has been largely unchanged for the past 10 years. Based on the most recent review in the U.S., Visa is adjusting its default U.S. interchange rate structure to optimize acceptance and usage and reflect the current value of Visa products," Visa said in a document obtained by Bloomberg.

Apple stock rose 2.8% Tuesday morning, helped along by news that the tech giant's Chinese suppliers were aiming to resume full-scale production on Feb. 10. That includes Foxconn, a critical supplier for Apple. Foxconn confirmed in a text message sent to Bloomberg News that it expects to restart production on schedule throughout China.

Most of Apple's iPhones are manufactured in China, and most are assembled by either Foxconn or Pegatron. The coronavirus outbreak in China, which had infected more than 20,000 people and claimed over 400 lives by Tuesday morning, has put Apple's supply chain in limbo. On Monday, an analyst at TF International Securities warned that Apple's iPhone shipments in the first calendar quarter could be reduced by 10% due to supply chain issues.

With the coronavirus outbreak continuing to escalate, there's a risk that the Chinese government will be forced to delay the restart of production further. That could put pressure on the supply of iPhones and hurt Apple's sales.

For now, investors aren't fretting much about the outbreak. While Apple stock has fallen slightly from its recent all-time high, shares remain up 90% over the past year.