Please ensure Javascript is enabled for purposes of website accessibility
Log In Help Join The Motley Fool
Free Article Join Over 1 Million Premium Members And Get More In-Depth Stock Guidance and Research
By Rich Duprey – Feb 4, 2020 at 5:41AM

Not even the Oracle of Omaha was able to reverse the industry's trends.

In an age when news can be consumed for free on the internet, Warren Buffett's investment in newspapers has always seemed somewhat anachronistic. But now it seems even the Berkshire Hathaway (BRK.A -0.83%) (BRK.B -0.40%) CEO sees the futility of keeping this small component of his mighty conglomerate going.

The portfolio of dozens of daily and weekly newspapers will be sold for $140 million to Lee Enterprises (LEE -1.72%), the company Berkshire hired in 2018 to manage the business. 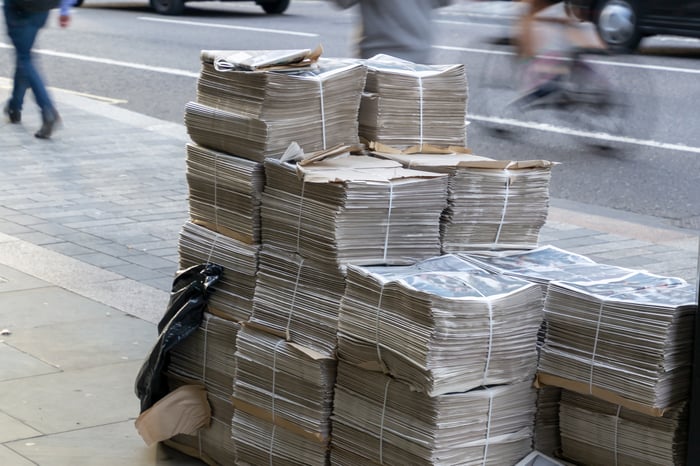 News no longer fit to print

Buffett has a penchant for letting the businesses Hathaway acquires continue to run their own operations; in this instance, it didn't work. Because Buffett has an eye for acquiring otherwise good businesses, his hands-off policy usually benefits the acquired company. They're able to keep their operations working as before, but with the financial backing necessary to meet whatever challenges made them a value priced asset to begin with.

Yet that didn't apply to the newspaper industry, which witnessed the erosion of subscription and ad revenue as readers and advertisers migrated toward Facebook, Twitter, and Alphabet's Google.

A 2016 study by Pew Research found just 20% of Americans got their news from a newspaper. While TV was the primary source for news at 57%, online websites, social media outlets, and apps represented 38% of the total. Newspapers only accounted for a good portion (48%) of consumers' news consumption among Buffett's own age group of 65 and older.

A lack of innovation

Newspapers have also suffered a massive decline in jobs over the past decade, with the number of employees being cut nearly in half, while other legacy media outlets like broadcast TV and radio have essentially remained stable.

Not surprisingly, only digitally native sources have seen growth, even if they still remain dwarfed by newspapers. But it costs a lot less to publish news online than it does on an actual press, where fewer people can perform more tasks.

Yet that was just the problem with Buffett's investment. Leaving in place those who were running the business before the Berkshire acquisition allowed the newspapers to continue stagnating without any innovation coming to bear. While bringing in Lee Enterprises to run BH Media had the potential to help these smaller papers keep up with technology, it was ultimately not enough to prevent the decline.

No doubt, even Buffett saw the writing on the wall for the newspaper industry. He may have had a nostalgic affinity for the business, having been a newspaper carrier when he was a child and then an avid reader of papers during his adulthood. But last year, he said newspapers were "toast."

The sale to Lee, though, shows that Buffett is still the master dealmaker, squeezing some extra cash out of the transaction. While Berkshire Hathaway will receive $140 million for the papers, it will loan Lee $576 million in long-term financing at a rate of 9%. Lee will use the proceeds to finance the acquisition, though the money will also be used to refinance $400 million in existing debt and will give the company enough cash to pay off its revolving credit line.

Many view the deal as beneficial for Lee, and its stock shot up 68% over the past week as a result. Yet while it has a portfolio of its own papers already, and the addition of Berkshire Hathaway's lets it double its audience, it is still reliant upon a dying industry.

Buffett's investment in newspapers was always an odd one. Despite buying his first paper back in the 1970s, most of his acquisitions were made over the past decade, so the state of disrepair would have been obvious. Of course, newspapers were never very central to running Berkshire Hathaway, but their sale shows not even Warren Buffett's wisdom could turn them around.