Please ensure Javascript is enabled for purposes of website accessibility
Log In Help Join The Motley Fool
Free Article Join Over 1 Million Premium Members And Get More In-Depth Stock Guidance and Research
By Matthew DiLallo – Feb 4, 2020 at 10:21AM

While most oil companies continue to struggle with the persistent volatility in the price of crude oil, ConocoPhillips (COP 5.14%) keeps cashing in, which was evident once again during the fourth quarter. The oil giant generated another gusher of cash flow, which gave it the money to invest in its operations while returning a boatload to shareholders. The company fully expects that trend to continue in the coming years, given its successful strategy of turning crude into cash.

Drilling down into ConocoPhillips' fourth-quarter earnings

ConocoPhillips' oil and gas output was within its guidance range for the quarter. While its overall production was 24,000 BOE/D below its level in the year-ago period, that was entirely due to asset sales. After those sales are adjusted for, production rose 24,000 BOE/D. Driving that increase was continued growth in the "Big Three" U.S. onshore unconventional shale plays (Bakken, Eagle Ford, and Permian Basin) as well as development programs and major projects in Alaska, Europe, and Asia Pacific.

For the full year, ConocoPhillips produced an average of 1.305 million BOE/D, up 5% from 2018's average after adjustment for asset sales. The main driver was the Big Three, where output surged 22%.

While ConocoPhillips' adjusted earnings came in a bit short of analysts' expectations, the oil giant generated another gusher of cash flow during the quarter at $2.7 billion. It reinvested $1.6 billion of that money into capital projects, paid roughly $500 million in dividends, and repurchased about $700 million in stock.

That cash tally brought the company's full-year number up to $11.7 billion. After funding capital projects, the oil company produced $5 billion in free cash, all of which it returned to shareholders via dividends ($1.5 billion) and its share repurchase program ($3.5 billion).

Meanwhile, the company ended the year with $8.4 billion of cash and short-term investments on its balance sheet, thanks in part to the sale of $3 billion of assets last year. That number should rise in the coming quarters since the company has two more sales on track to close, which should generate an additional $1.8 billion in proceeds. 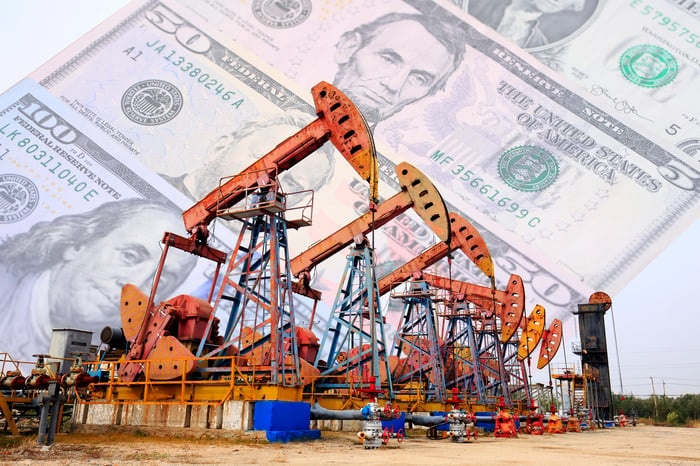 ConocoPhillips expects to invest another $6.5 billion to $6.7 billion on capital projects this year. That budget level should support production in the range of 1.23 million to 1.27 million BOE/D this year. While that's lower than last year's average, it's entirely due to the sale of assets, which not only bolstered its cash position but will also further reduce costs.

With such an enormous cash pile and a business that's generating gobs of free cash flow, ConocoPhillips plans to continue returning money to shareholders. The company announced a $10 billion increase in its share repurchase program, bringing it up to $25 billion. It has already purchased $9.6 billion in shares since late 2016 (reducing its share count by more than 10%) and intends to buy back another $3 billion in 2020. The company can easily finance that repurchase program with a combination of free cash flow (depending on oil prices) and cash on hand. Overall, the oil company has enough money remaining on its boosted share repurchase program to retire another 24% of its outstanding stock.

An oil stock that knows how to make money

Last year capped ConocoPhillips' three-year strategic transformation into a cash-gushing machine. Because of that, the energy company has positioned itself to thrive in any market environment. That's evident by its 2020 plan, which will see the company return a boatload of cash to investors this year, no matter what happens with the price of oil.