Please ensure Javascript is enabled for purposes of website accessibility
Log In Help Join The Motley Fool
Free Article Join Over 1 Million Premium Members And Get More In-Depth Stock Guidance and Research
By Rich Duprey - Feb 5, 2020 at 6:58AM

The video game retailer continues to absorb punches to its business.

Do the hits ever stop coming for GameStop (GME -3.56%)? The video game retailer is suffering under a cascade of bad news and more keeps being poured on.

The latest misfortune to befall GameStop is actually a double whammy:

With hardware sales plummeting, software sales in a nose dive, and even accessories and pre-owned games in freefall as everyone awaits the console upgrade cycle to begin later this year -- not to mention the absolutely horrendous Christmas season it had -- these were new speed bumps GameStop didn't need to hit. 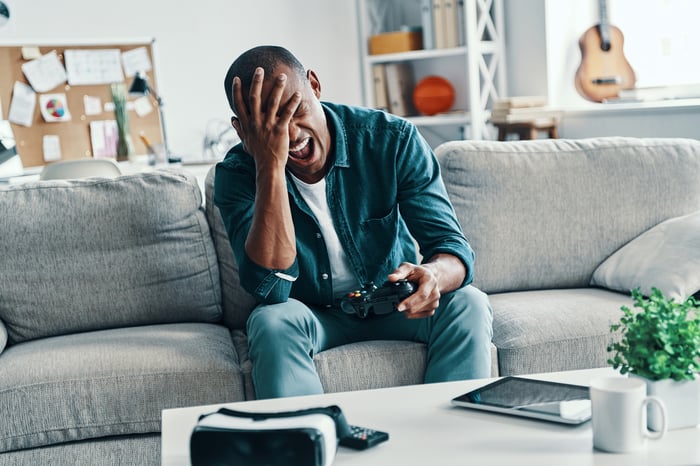 Last week Moody's issued a series of downgrades to GameStop's debt, increasing the speculative nature of the debt and also increasing its probability of default. While it did improve GameStop's outlook to stable, the ratings agency noted the outlook for the retailer's earnings is deteriorating and it has maturities approaching on some senior unsecured debt.

Moody's vice president Adam McLaren was quoted as saying, "Sustained competitive threats from downloadable, streaming, and subscription gaming services, as well as the company's ongoing transformation to improve profitability and evolve its vendor and partner relationships, elevate the company's business and operational risk during a period of industry weakness."

GameStop's overall debt rating was dropped from Ba2 to B2, the probability of default was increased from Ba2-PD to B2-PD, and the speculative nature of its liquidity was downgraded from SGL-1 to SGL-2 (SGL means speculative grade liquidity).

Now, as much as that indicates a worsening situation, it should be noted that the new ratings still see a substantial likelihood GameStop pulls through. It also means GameStop still has good liquidity and is likely to meet its obligations over the next year.

Still, Moody's recognizes the retailer faces increasingly difficult times as revenue and margins come under pressure, and while it's possible GameStop can get an upgrade in the future, the ratings agency says it is unlikely.

Looking for a second bite at the Apple

The other problem GameStop has now is getting Cool Holdings to pay up for the Apple (AAPL 0.17%) products reseller it agreed to buy last year.

The company, which became one of the largest Apple Premium Partners, or companies authorized to resell Apple products and perform service on Apple electronics, has been in a downward spiral of its own. Last month the Nasdaq stock exchange notified it was delisting the company from the exchange as of Jan. 27. It's also lost executives and directors over the past year and is undergoing a restructuring.

In the filing with the SEC, Cool Holdings noted it was in default of its obligations to GameStop because it didn't make its first quarterly payment for Simply Mac and GameStop said it was exercising its right to demand payment in full. Cool Holdings ended up hiring consultants to negotiate a new payment plan with the retailer.

A circle of despair

The sale of the Apple reseller had been part of GameStop's efforts to get rid of underperforming businesses, which had seen it previously sell off its Spring Mobile phone operations. While it is possible it could work out a new agreement with Cool Holdings, it certainly looks like all the trouble the company has makes it seem doubtful.

That would bring Simply Mac back onto the books for GameStop, and while it would undoubtedly try to find a new buyer for it, it's an additional drag on its performance that it doesn't need right now. As more consumers abandon physical media, having that $8 million cash in the bank would be much better.

When it rains, it pours, and GameStop seems to be caught in a deluge.