The health insurer especially benefited from strong growth in its Medicare business.

Humana (HUM 0.03%) beat Wall Street's estimates on both the top and bottom lines when it reported its 2019 third-quarter results in November. Investors were hoping for a repeat performance with the health insurer's fourth-quarter numbers.

Those hopes were fulfilled when Humana announced its 2019 fourth-quarter and full-year results before the market opened on Wednesday. Here are the highlights from Humana's Q4 update. 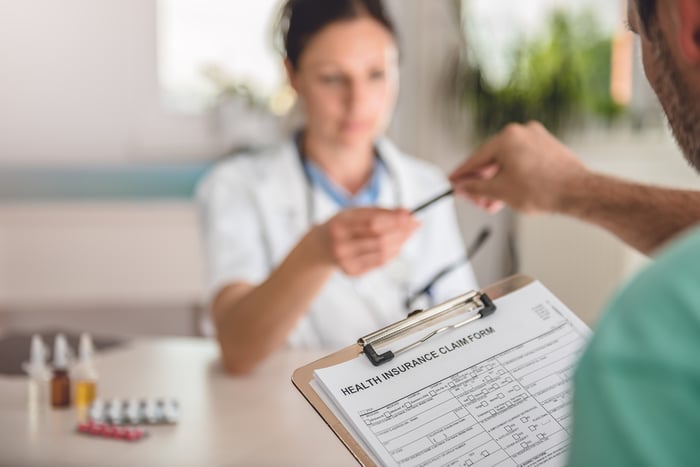 Humana announced Q4 revenue of $16.3 billion, a 15% increase from the $14.2 billion reported in the same quarter of the previous year. This result topped analysts' average revenue estimate of $16.19 billion.

The company reported net income in the fourth quarter of $593 million, or $3.84 per share, based on generally accepted accounting principles (GAAP). This was big jump from Humana's net income of $436 million, or $2.58 per share, recorded in the prior-year period.

The brightest spot in Humana's Q4 update was the performance of its retail segment, which focuses primarily on Medicare plans. Revenue for the segment jumped 18% year over year to $14.2 billion. The retail segment's earnings, though, fell nearly 19% to $275 million on a GAAP basis and $279 million on an adjusted basis as medical costs rose.

Humana's healthcare services segment, which includes its pharmacy services business, delivered Q4 revenue of $6.7 billion, up 8% year over year. The segment's earnings rose 11% on a GAAP basis to $178 million and 8% on an adjusted basis to $241 million.

It wasn't as good of a picture for Humana's group and specialty segment, which markets health insurance products to employer groups and the military, plus specialty insurance products including dental and vision insurance. Revenue for the segment slipped nearly 2% year over year to $1.9 billion. The segment also generated a loss of $146 million on a GAAP basis and a loss of $145 million on an adjusted basis.

Humana anticipates full-year 2020 GAAP earnings per share (EPS) will be between $17.76 and $18.26. Non-GAAP EPS is expected to be between $18.25 and $18.75. The company reaffirmed its 2020 individual Medicare Advantage membership year-over-year growth projection of between 7.5% and 9.2%. It also changed its estimate for stand-alone prescription drug program membership to a decline of around 550,000 members from its previous guidance of a decline of around 600,000 members.

CFO Brian Kane said, "We enter 2020 with positive momentum from strong 2019 results and industry-leading individual Medicare Advantage membership growth." He added, "We expect 2020 to be another good year for the company with solid top and bottom line growth notwithstanding the return of the health insurance industry fee."

Perhaps the biggest unknown is the impact that the presidential election this year will have on healthcare stocks. Humana and other health insurers would be significantly impacted if a candidate advocating single-payer healthcare is elected president.