Please ensure Javascript is enabled for purposes of website accessibility
Log In Help Join The Motley Fool
Free Article Join Over 1 Million Premium Members And Get More In-Depth Stock Guidance and Research
By Keith Speights - Updated Feb 5, 2020 at 11:52AM

The biotech trounced Wall Street revenue and earnings estimates thanks to strong sales for its tardive dyskinesia drug.

No one can complain about Neurocrine Biosciences' (NBIX 0.36%) stock performance in 2019. The biotech's shares skyrocketed more than 50% last year. So far in 2020, though, Neurocrine hasn't given investors many reasons to cheer. Until now.

Neurocrine announced its 2019 fourth-quarter and full-year results after the market closed on Tuesday, and there was nothing but good news for investors. Here are the highlights of the biotech's Q4 update. 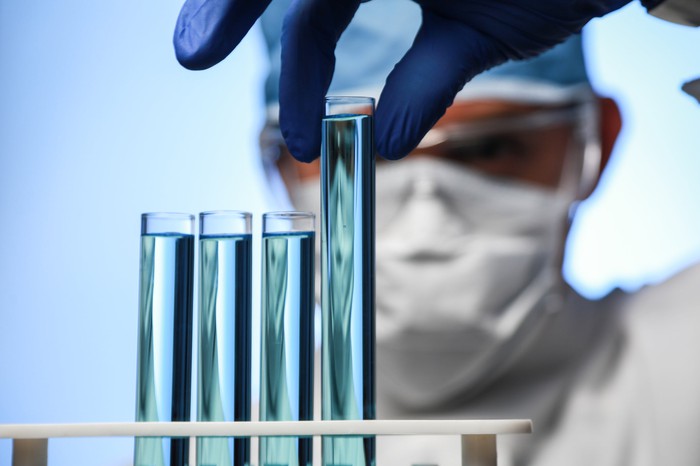 Fourth-quarter revenue was $244.1 million, a strong 86% year-over-year jump. This also came in well above the average analyst estimate of $230.9 million.

The company announced net income of $34 million, or $0.35 per share, based on generally accepted accounting principles (GAAP). This reflected a significant improvement from GAAP earnings of $18 million, or $0.19 per share, recorded in the same quarter of 2018.

Q4 was all about Ingrezza, Neurocrine's tardive dyskinesia drug. Sales skyrocketed in the fourth quarter to account for roughly 97.5% of the company's total revenue. The remaining sliver came from collaboration revenue.

The company did get a boost from the timing of quarter-end purchases of Ingrezza. It said that its days-on-hand channel inventory at the end of the fourth quarter of 2019 increased from the third quarter because of these purchases. This resulted in higher net product sales of around $11 million.

It's always nice when sales rise at a faster rate than expenses. That's exactly what happened in the fourth quarter. The company's operating expenses rose 78% year over year to $195.3 million. But with revenue soaring by an even greater percentage, the bottom-line improvement was impressive.

There's a lot to look forward to with Neurocrine in the coming months. CEO Kevin Gorman said, "By mid-2020, our activities position us to have three approved treatments in four indications and three additional ongoing pivotal studies."

Those three approved treatments referred to by Gorman include Ingrezza and Orilissa, which Neurocrine licensed to AbbVie. In addition, Neurocrine anticipates winning Food and Drug Administration approval by early April for opicapone in treating Parkinson's disease.

Biotech stocks could be rattled by the 2020 political campaign. Lawmakers from both major parties could support changes that would hurt drugmakers. But with multiple catalysts potentially on the way, the future looks pretty bright for Neurocrine.

Editor's note: A previous version of this article included a typographical error stating that Neurocrine's fourth-quarter revenue was $244.1 billion rather than $244.1 million. The Fool regrets the error.