Please ensure Javascript is enabled for purposes of website accessibility
Log In Help Join The Motley Fool
Free Article Join Over 1 Million Premium Members And Get More In-Depth Stock Guidance and Research
By Adria Cimino – Feb 5, 2020 at 7:42AM

Illumina’s share of the sequencing market, new collaboration agreement with Roche, and growth in the clinical oncology business position it for long-term revenue growth.

DNA sequencing giant Illumina (ILMN 6.93%) started 2020 off with what many might consider disappointing news, announcing that it had dropped the planned acquisition of Pacific Biosciences (PACB 9.81%). That followed a lackluster year for Illumina's shares, which took a 19% hit in July  as the company reported lower-than-expected revenue in the second quarter.

But recent news should give investors reason to take a look at Illumina shares. The company reported fourth-quarter earnings that topped estimates, announced a collaboration agreement with Roche (RHHBY 6.90%), and launched two new sequencing systems. 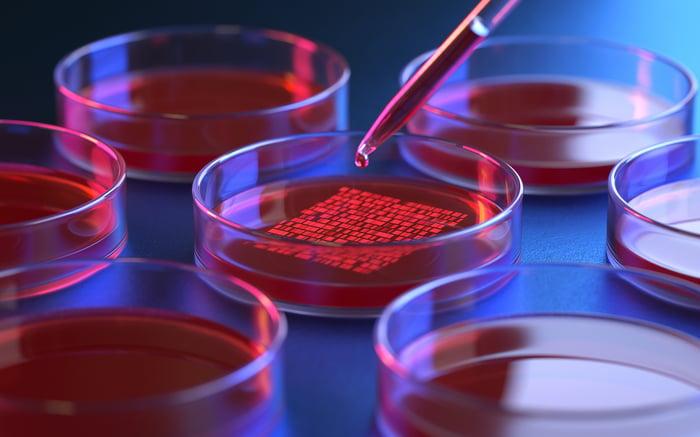 Before getting to why Illumina shares are looking attractive, we should add a bit of background on the failed Pacific Biosciences deal. Illumina and its smaller rival both sell devices to sequence genomes. Their devices read genetic material, and the results can be used in various areas of research including the identification of genetic links to disease. Illumina specializes in "short reads" of genetic material, while Pacific Biosciences focuses on "long reads," which involve longer portions of DNA. Illumina dropped the deal after regulatory agencies cited concerns, saying the operation would create a monopoly.

Loss of the long read

Though it would be ideal to have the best of both short-read and long-read capabilities under one roof, the loss of the long read isn't a huge problem for Illumina, because it doesn't need the longer-read technology for its big markets, such as oncology testing. The short-read and long-read technologies are complementary, suited for different applications, instead of directly competing for the same projects. Furthermore, Illumina is developing long-read technology in-house, and it's already a leader in the overall sequencing field. According to Morningstar, Illumina holds an estimated 70% share of the sequencing market.

With that market share figure looking good, let's move along to more of the positives. The global next-generation sequencing market for clinical oncology alone is set to grow at a compound annual growth rate of more than 13% to reach $1.5 billion by 2025, according to Grand View Research. Next-generation sequencing, the business of Illumina, means sequencing genomes at a high speed and a low cost. And oncology is a growing and promising area for the company. In its recent earnings call, Illumina said oncology makes up 20% of its total sequencing consumables, which include items like test kits, and this segment grew some unspecified amount faster than the 20% growth in total clinical consumables, to an overall $830 million, in 2019. . Illumina CEO Francis deSouza said that at the moment most clinical oncology revenue is coming from testing, but in the years to come, screening and monitoring may represent "potentially much larger opportunities."

Considering the possibilities in the oncology market, Illumina's recent deal with fellow biotech stock Roche offers more good news. In the announcement, Illumina and Roche said they would collaborate to boost the adoption of sequencing-based tests in oncology. Roche will develop and distribute in vitro diagnostic tests on certain Illumina systems, and the two companies will collaborate on technology to complement Illumina's pan-cancer assay, TruSight Oncology 500.

As for earnings, as mentioned above, the company stumbled in the second quarter, but the fourth quarter showed that things are back on track. Illumina reported a 10% increase in revenue to $953 million and a more than 28% increase in non-GAAP earnings per share of $1.70, surpassing analysts' estimates.

So is Illumina a buy?

Though recent news is positive, the growth forecast for 2020 isn't wowing investors, and the company's agreement with Roche, the launch of two new sequencing systems -- the NextSeq 1000 and NextSeq 2000 -- and even growth in the oncology market will take time. Results of these efforts won't happen overnight.

The good news here is investors will likely find various attractive entry points to Illumina this year. With the shares down 38% so far, now appears to be one of them. Wall Street's average price target means about 15% upside from the current price. And with a price-to-earnings ratio of about 43, the shares are trading close to their lowest level since 2018.

Illumina won't necessarily bring great gains quickly, but it is a stock that is worth holding on to for the long term thanks to its position in the market and future growth opportunities. If you have the patience, it has the potential to illuminate your portfolio.