Please ensure Javascript is enabled for purposes of website accessibility
Log In Help Join The Motley Fool
Free Article Join Over 1 Million Premium Members And Get More In-Depth Stock Guidance and Research
By Rich Duprey - Feb 5, 2020 at 10:46AM

The possibility of vacant storefronts scares shopping malls, but it might be a risky business.

Bankrupt fast fashion retailer Forever 21 reached an $81 million deal to sell its retail business to a group of investors made up of mall operators Simon Property Group (SPG 2.20%) and Brookfield Properties Partners (BPY), as well as the brand management outfit Authentic Brands Group.

Although its bankruptcy is a symptom of the retail apocalypse that shows no sign of abating, and could even go on for another two years, the rescue of Forever 21's operations also shows just how worried shopping malls are about the devastation.

This is the second time the trio have partnered to lift a mall retailer out of bankruptcy -- they worked together in 2016 to salvage Aeropostale -- but it lays out a worrisome trend if the retail industry collapses further. 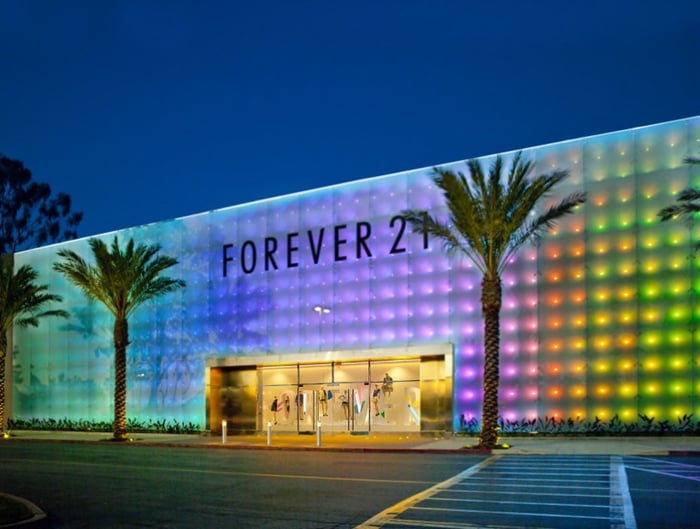 Simon Property Group has made it clear it wants to help troubled retailers. The mall operator told analysts it had $6.8 billion in liquidity available, and it was ready to deploy it in an effort to keep retail stores open. It has good reason to.

The broken window theory of criminology says that visible signs of crime and disorder, such as broken windows on businesses, when left unrepaired, encourage further criminal acts. Fix the windows and clean up the neighborhood, and crime can be reduced.

Similarly, vacant stores in a shopping mall create an appearance of disorder and decline, which causes consumers to stay away and leads to more stores having to close.

Last year there were a record number of store closings reported, and though 2020 might not see the same level of deterioration, the year is already off to a bad start with a number of businesses reporting they will close more or all of their stores.

That could create a blight on the shopping mall, which is why these companies worked to prevent a total liquidation of Aeropostale (mall operator General Growth Properties was the actual partner last time, but it was acquired by Brookfield).

Simon had 160 Aeropostale stores in its malls while General Growth had 77. They paid $243 million plus the assumption of some debt to acquire the retailer. Authentic Brands Group runs the actual retail business.

A web of connections

The deal for Forever 21 is being pursued for the same reasons. Simon Property Group and Brookfield are two of the fast fashion icon's biggest landlords, with Simon having about 100 stores totaling about 1.4% of Simon's total base rent, while the retailer represents about 2% of Brookfield's base rent.

Other mall operators with significant exposure to Forever 21 include CBL & Associates Properties, Macerich, Pennsylvania REIT, and Taubman Centers. Their total base rent exposure ranges from around 1.1% to 4%.

In new bankruptcy filings, the retailer says it will name the two mall operators as stalking horse, or lead bidder for its assets, and the purchase price sets a floor for other potential bidders who have until Feb. 10 to make a better offer.

If Simon and Brookfield are successful, Forever 21's 549 stores will remain open, at least for the time being.

It works until it doesn't

While the assets are being acquired cheaply, it's still a risky venture. The retailers already exhibited an inability to appeal to consumers, which is why they went bankrupt to begin with, and they might not be able to revive demand for the brands.

So far the partnership for Aeropostale seems positive. Simon was able to report that last year the retailer improved operations contributed to higher income for the mall operator, but providing cheap, ever-changing fashion as Forever 21 does may not work out as well.

Although Authentic Brands has proven adept at running an amalgamation of brands, an economic downturn that doesn't even sink as low as the financial crisis of the last decade could make it much more difficult for these investments to pay off.

The mall operators are in essence doubling down on their business, but are betting on the weakest parts. That could be a risky strategy as the number of investments rise.