Please ensure Javascript is enabled for purposes of website accessibility
Log In Help Join The Motley Fool
Free Article Join Over 1 Million Premium Members And Get More In-Depth Stock Guidance and Research
By Jeremy Bowman - Feb 5, 2020 at 8:30AM

Advance Auto Parts, AutoZone, and Genuine Parts Company were among the stocks that dove in January.

Shares of auto parts retailers, including Advance Auto Parts (AAP 2.08%), AutoZone (AZO 1.91%), and Genuine Parts Company (GPC 0.42%), the owner of NAPA auto parts stores, all fell by double digits in January. There was no major news out on these companies, but a combination of analyst downgrades and valuation concerns pushed the sector down as analysts worried about warm winter weather, slowing economic growth, and stretched valuations.

According to data from S&P Global Market Intelligence, Advance Auto Parts fell 17.7%, AutoZone lost 11.2%, and Genuine Parts gave up 11.9% during January. The chart below shows the trajectory of each stock during the month. As you can see, the three stocks largely traveled in tandem. 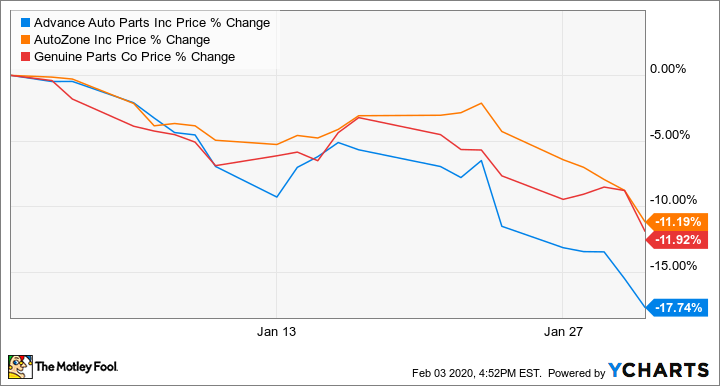 AutoZone slipped 3.6% over a two-day span starting Jan. 6 after Wedbush downgraded the stock from Outperform to Neutral and analyst Seth Basham lowered his price target from $1,375 to $1,225. He seemed to think the stock was ready for a breather after gaining 40% in 2019, and saw risks from warmer winter weather and tariff-driven inflation. 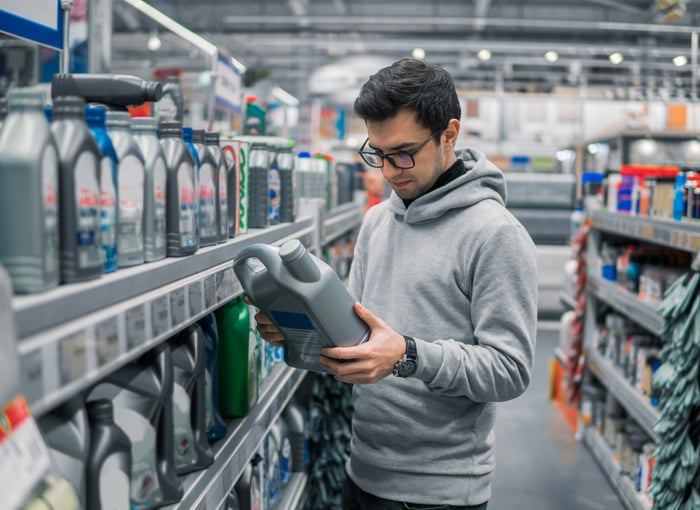 A week later, Advance Auto Parts, the worst performer of the bunch last month, also got dinged by a downgrade from JPMorgan on Jan. 13 as analyst Christopher Horvers cut his rating on the stock from Overweight to Neutral and lowered his price target from $168 to $163. He said that Advance's primary sales drivers seem to be "more incrementally negative" due to issues like warm winter weather, lower inflation and slower GDP growth, factors that weigh on the sector as a whole. Further, Horvers said that Advance's do-it-yourself business, as opposed to do-it-for-me, is already "on shaky ground," which could impede the company's margin growth. On the same day, Wedbush removed the stock from its Best Ideas list due to valuation. Advance lost 2.5% that day after a similar loss in the previous session. However, it regained some of those losses after Melvin Capital Management reported a 5.3% stake in the auto parts company on Jan. 14.

Finally, on Jan. 23, Advance Auto Parts shares dove again as the stock got another downgrade, this time from Overweight to Neutral by Atlantic Equities. Over the final week of January, the sector stocks slipped as the broader market pulled back over coronavirus concerns, though the auto parts retailers don't have any direct exposure to the outbreak.

The weak start to 2020 comes after some auto parts stocks have outperformed in recent years, including AutoZone and O'Reilly Automotive, both of which were among the top-performing retail stocks of the last decade. Looking ahead, many of the concerns expressed by the analysts are temporary. While this winter has been warmer on average and largely devoid of major storms that would drive more consumers to make auto repairs, that is not a fundamental issue with any auto parts stock. Meanwhile, concerns about economic growth and the coronavirus will continue to play out in the market, but investors can take comfort in knowing that auto-parts retailers are largely recession-proof, since most people need a working set of wheels to get to their jobs and take care of their daily business no matter the shape of the economy.

All three of these stocks will have a chance to turn things around later in February when they report quarterly earnings. Analysts have modest expectations, forecasting only low-single-digit growth on the top line.

This Dividend King Hiked Its Payout Again: Should You Buy It?