It could be a top buyout target soon.

Shares of the small-cap cancer specialist Clovis Oncology (CLVS 2.34%) were up 12%, on average volume, as of 12:05 p.m. EST Wednesday. The biotech's stock appears to be getting a boost from the rampant speculation about the upcoming buyout bonanza expected to take place across the industry. Fellow cancer drugmakers Atara Biotherapeutics, Exelixis, and Puma Biotechnology are all on the move as well today.

Clovis has long been rumored to be a top buyout target, thanks to the sizable commercial potential of its PARP inhibitor known as Rubraca. At present, Rubraca is approved as a treatment for advanced ovarian cancer, where its sales have seriously lagged behind competitors from AstraZeneca and GlaxoSmithKline. 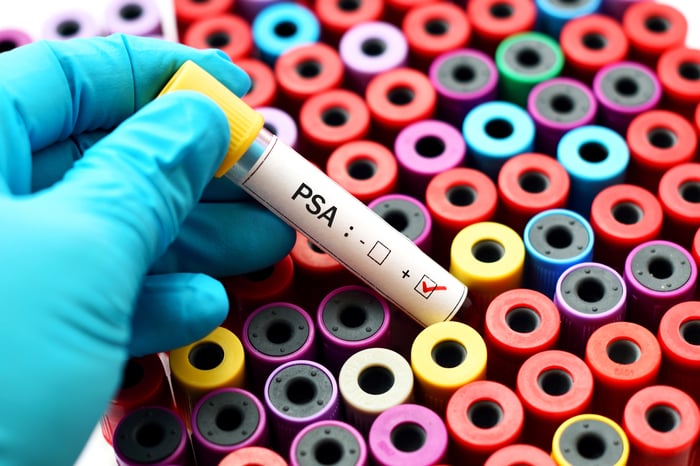 By May 15 of this year, however, the Food and Drug Administration is widely expected to expand the drug's label to include adult men with recurrent, metastatic BRCA1/2 mutation-positive, castration-resistant prostate cancer. Taken together, these two indications have the potential to push the drug's sales over $700 million per year by 2025. Given that Clovis' market cap is only $715 million at the moment, it may prove to be too good a bargain for potential suitors to pass up.

Where is this buyout speculation emanating from? First and foremost, it's no secret that Gilead Sciences is aggressively looking for new sources of growth right now. In addition, Pfizer, GlaxoSmithKline, and Merck are all expected to be big players on the mergers and acquisitions scene this year. So there should be plenty of suitors for undervalued cancer companies like Clovis with products already on the market.