And the Roomba maker outlined better-than-expected guidance for the year ahead.

iRobot (IRBT 1.80%) announced stronger-than-expected fourth-quarter 2019 results on Wednesday after the markets closed, and shares of the home-robotics specialist are up a whopping 16% as of this writing in response.

Indeed, iRobot saw a notable acceleration in top-line growth in both the U.S. and internationally as it worked to defend market share amid increasing competition. And its expected earnings decline was less severe than many industry watchers had feared.

Let's take a closer look at what iRobot accomplished in the key holiday quarter, starting with its headline numbers:

In the fourth quarter, iRobot's domestic revenue climbed a solid 15% to $247.2 million, helping prop up a 7% increase internationally to $179.6 million. Within the latter, iRobot achieved 9% growth from the Europe, Middle East, and Africa (EMEA) region, which more than offset expected slight declines in Japan and other smaller regions. iRobot also confirmed sales of its newest robots -- namely, the Roomba s9 vacuum and Braava jet m6 floor-mopping bot -- were the primary drivers of growth in 2019, making up roughly 17% of the company's full-year sales.

As for earnings, after accounting for the impact of one-time items like acquisition costs, stock-based compensation, gains on strategic investments, and litigation expenses, iRobot's adjusted (non-GAAP) net income arrived at $19.7 million, or $0.69 per share.

By comparison, most analysts were expecting significantly lower earnings of $0.40 per share on revenue of only $415.5 million. 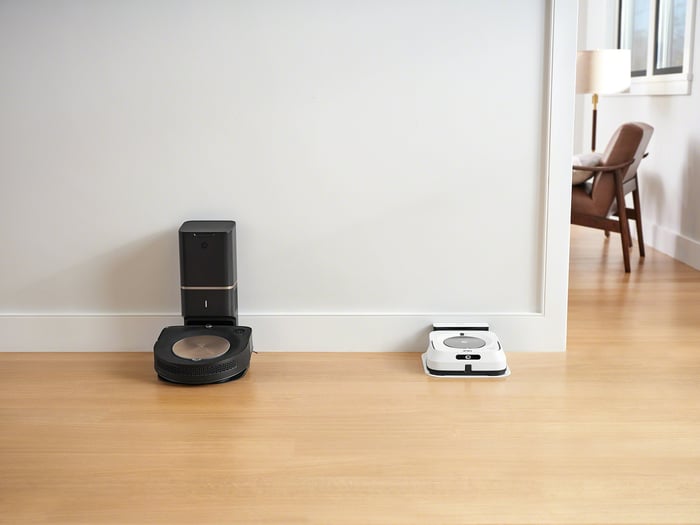 Our financial performance this quarter benefited from the combination of strong revenue growth in the United States and disciplined spending. Throughout 2019, we executed well on all major elements of our strategy while navigating increasingly challenging market conditions in the U.S. and intense price competition in EMEA. As a result, we maintained our Roomba leadership, took important steps to further broaden our product portfolio within and beyond RVCs, advanced our efforts to build out our Smart Home ecosystem, and made tangible progress diversifying our supply chain activities. Our newest pricing and promotional tactics played an important role in enabling us to defend our category leadership and hold share in the U.S. despite aggressive price competition.

On the challenging, exciting year ahead

"As we move forward, we are focused on executing against our 2020 strategic priorities in ways that will enable us to drive near-term growth, fortify our leadership and set us up to capitalize on a broad range of exciting longer-term opportunities," Angle elaborated.

Indeed, we already know iRobot plans to launch its new Terra robotic mower later this year on a limited commercial basis in the U.S., followed by a broader rollout next year. And the company has been hard at work striking multiple strategic partnerships focused on advancing novel smart-home robotics technologies.

All told, I've made no secret of the fact that iRobot is one of my personal favorite top stocks leading up to this report. But after coupling that guidance with its strong holiday-quarter beat -- and with shares still down nearly 60% from last year's highs -- I suspect iRobot still has plenty of room to run from here.