Please ensure Javascript is enabled for purposes of website accessibility
Log In Help Join The Motley Fool
Free Article Join Over 1 Million Premium Members And Get More In-Depth Stock Guidance and Research
By Daniel Miller - Feb 6, 2020 at 11:36AM

Sales declined 2.8% during the fourth quarter compared to the prior year, to $3.22 billion, but that result managed to top analysts' estimates calling for $3.18 billion. Adjusted earnings per share checked in at $0.91, again beating analysts' estimates calling for $0.86 per share. One factor for investors to note was the negative impact on net sales from Kellogg's divested businesses: On an organic basis, net sales increased by 2.7% during the fourth quarter. 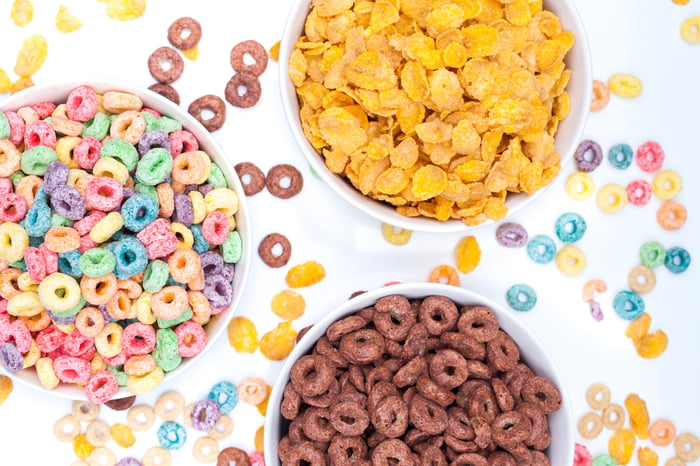 A likely reason that the stock is down today is the company's forward guidance. Management expects full-year 2020 adjusted earnings per share to decline 3% to 4% as the business divestitures won't immediately be offset by its core business growth. Analysts' full-year 2020 estimates would have pegged Kellogg's adjusted earnings per share to grow roughly 3.6% -- a fairly large disconnect.

The basic idea behind divesting non-core businesses was so that Kellogg could focus on its core brands, marketing, and innovation. While fourth-quarter adjusted earnings per share declined because core brands couldn't offset the divestitures in the near-term, management will need to prove that its focus on core brands can more than offset that loss. Kellogg has not only taken steps to improve its focus on core brands -- a key part in succeeding in the a competitive consumer discretionary industry -- but it has started to optimize its supply chain distribution and prioritize debt reduction. However, those strategic moves will take time and patience to bear fruit.