Please ensure Javascript is enabled for purposes of website accessibility
Log In Help Join The Motley Fool
Free Article Join Over 1 Million Premium Members And Get More In-Depth Stock Guidance and Research
By Howard Smith – Feb 7, 2020 at 10:23AM

With a new CEO and $3.5 billion in cap ex projects in progress over the next two years, could this be a good time for investors to start a position?

In his best-selling book One Up on Wall Street, famed mutual fund manager Peter Lynch wrote, "cyclicals are the most misunderstood of all the types of stocks." As North America's most diversified steel company, and largest recycler, Nucor Corporation (NUE 2.25%) falls squarely in the category of a cyclical company. But Nucor's recent large investments make it clear in which direction it wants to take its business, and shareholders could benefit from this growth. As Lynch also noted, however, "timing is everything in cyclicals...", so let's explore whether these investments correspond with a good time to invest. 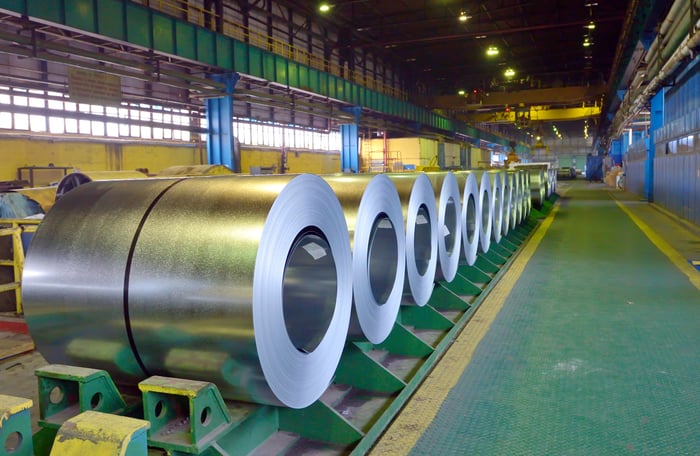 That Nucor is one of the most respected steel and steel products companies in the world isn't in question. Its culture started with founder Ken Iverson's views on pushing responsibility and decision-making to the manufacturing floor and keeping the company lean. Its practice of never having laid off an employee in 50 years of operations -- particularly when many competitors consider that "business as usual" -- breeds loyalty among its teammates.

For more than two decades, Nucor management has invested back in the business with an aim to weather the business cycles, increasing the ultimate returns during both the peaks and troughs. A 10-year chart of earnings per share (EPS) and stock price shows both the cyclical nature as well as the longer-term gradual increase in EPS. 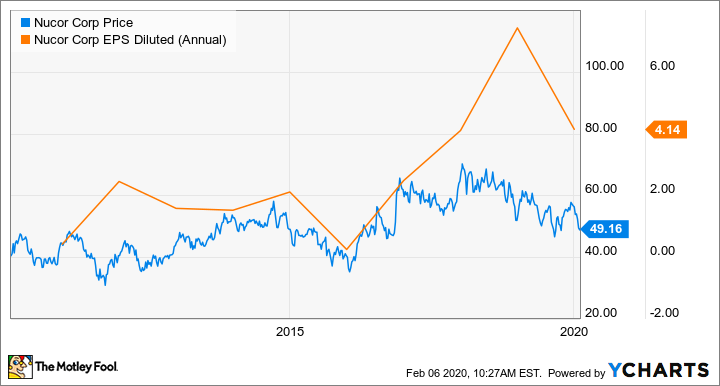 If that increase in the range of EPS is a sign of things to come, the recent swing toward the bottom of that range might indicate that now is a good time to invest.

A surge of investments

A new CEO, Leon Topalian, has taken the reins at the start of this year. In his first conference call, he listed his '"immediate priorities" in his opening remarks. After safety -- always stressed as the No. 1 priority at Nucor -- he cited the execution of bringing online the $3.5 billion worth of investment projects currently in progress.

These projects include investments in many areas of Nucor's diversified business, including rebar micro mills, sheet mill additions and expansions, and a new greenfield plate mill, as well as other projects spread around the company.

The new plate mill project alone is expected to take an investment of $1.35 billion. It's planned to start up in 2022 and will be able to produce 97% of the plate product needs of the domestic market, according to the company.

At its 2019 Investor Day, Nucor noted that it tracks and supplies 24 different end-use markets. This diversity can help dampen the severity of its cycles. However, there is one area where several markets and products are affected: infrastructure. Needs in domestic infrastructure include almost all of the products made by the company, including plate, bar, structural products, and sheet.

While the federal government continues to talk about an infrastructure spending bill, the needs continue to build. In its most recent Infrastructure Report Card, the American Society of Civil Engineers reports a funding gap of over $1 trillion through 2025 for areas including surface transportation, water and wastewater, electricity, aviation, and ports and inland waterways.

Surface transportation in particular has seen the funding gap widen in recent years. This includes critical highways, bridges, commuter rail, and transit systems that are critical for business and the economy.

In its most recent conference call, Nucor management noted that even though there isn't currently a federal infrastructure bill, individual states are doing a lot that should boost non-residential construction markets. If much-needed investment is earmarked for more projects, Nucor's current facilities, and new ones like the greenfield plate mill, should benefit nicely.

While there is a lot to like about this company, Nucor is in a commodity business, and there is no getting around that steel prices as well as economic growth will drive the business cycles of this industry. Investors need to decide whether the timing is right before they buy into Nucor.

2019 was a successful year for the company. Still, Nucor saw a dip in earnings, and the current stock price is back to where it was prior to the 2016 election.

No investor can expect to be perfect on timing, and a recession or other negative macroeconomic event would affect this industry. Nucor has increased its base dividend for 47 straight years, though, and shown that it can consistently return capital to shareholders, even while investing for the future. Even if the timing is off, now might be a good time to add Nucor to the cyclical portion of your portfolio.