Please ensure Javascript is enabled for purposes of website accessibility
Log In Help Join The Motley Fool
Free Article Join Over 1 Million Premium Members And Get More In-Depth Stock Guidance and Research
By Matthew DiLallo – Feb 7, 2020 at 8:16AM

Brookfield Renewable Partners (BEP -3.07%) produced less power during the fourth quarter because of weaker resource conditions over the year-ago period. Those headwinds, which affected its hydro, wind, and solar platforms to varying degrees, caused its cash flow to decline from the year-ago period.

However, while the fourth quarter was a weaker one for the renewable energy company, it still delivered exceptional results for the full year. So it's well positioned to continue creating value for its investors over the long term.

Several factors weighed on Brookfield's power generation and FFO during the fourth quarter as the company encountered issues in all three of its operating segments: 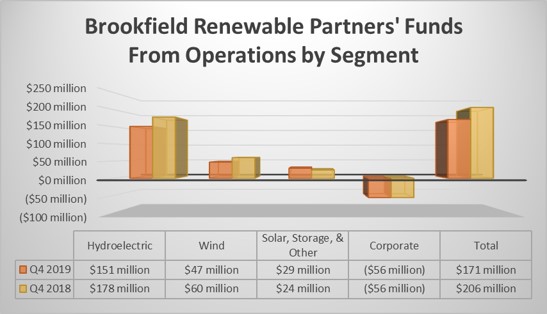 Earnings in the company's hydroelectric segment slumped 15% year over year. The main issue was that it produced less power than in both the year-ago period and its long-term average. The biggest weak spot was Canada, where actual generation was 31% below last year's level and about 19% less than its long-term average. The company's Canadian hydro assets therefore only produced $27 million of FFO during the period, which was about 53% below the year-ago level. Brookfield also experienced lower generation in the U.S., Brazil, and Colombia. It was able to offset some of this through its efforts to improve its margins in those regions.

Brookfield's wind business also went up against some headwinds during the period. Europe was the weakest region, as FFO from its assets declined 56% to $11 million. The main culprit there was the impact of the sale of wind farms in Portugal and Northern Ireland, which gave Brookfield the capital to recycle into higher returning opportunities.

The lone bright spot was the company's solar, storage, and other segment where FFO increased by 21%. That improvement came even though the company's generation declined. It offset the lower production by improving the margins of its legacy assets as well as acquiring new ones.

For the full year, Brookfield generated $761 million, or $2.45 per unit, of FFO, up 13% from 2018's level on a per-unit basis. Powering that growth was a combination of acquisitions, development projects, and the company's initiatives to improve the profitability of its operations. 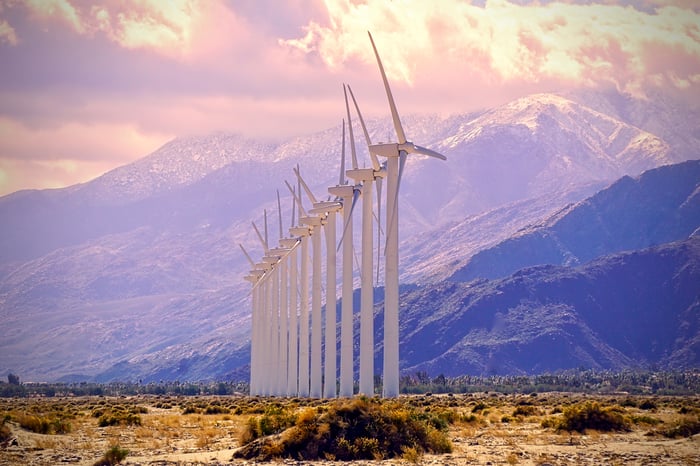 A look at what's ahead for Brookfield

Brookfield has several growth initiatives in various stages of the pipeline. The company closed its acquisition of a 50% interest in solar power project developer X-Elio during the fourth quarter. That deal added 972 megawatts (MW) of operating solar assets to Brookfield's portfolio and 6,000 MW to its development pipeline. Meanwhile, the company signed agreements to acquire 14 solar development projects in Brazil. It expects to invest $30 million into those deals, which will add 428 MW of solar capacity to its portfolio when it closes the transactions in the first quarter.

Brookfield also offered to acquire the rest of the shares of TerraForm Power (TERP) that it doesn't already own in an all-stock deal. That transaction would immediately boost the company's per-share results while enhancing its presence in North America and Western Europe. It would also further expand the company's solar operations, especially in light of TerraForm's recent initiatives. That company acquired 44 MW of solar assets in Spain last quarter for $70 million and signed a deal to buy another 100 MW of solar in that country for $115 million, which it expects to close this quarter.

Brookfield's growing pipeline of development projects and acquisitions has it well on track with its five-year strategy to continue growing its FFO at a double-digit annual rate. The company should therefore have plenty of power to continue increasing its distribution, which now yields 4.1% after it boosted the payout by another 5% this year.

While Brookfield Renewable's cash flow can vary from quarter to quarter depending on resource conditions, it continues to grow at a healthy annual pace, which was again the case last year. That trend appears poised to continue in 2020, given all the expansion opportunities the company has in its pipeline. That will give it the power to keep boosting its payout, making it an ideal option for dividend investors to hold for the long haul.