Please ensure Javascript is enabled for purposes of website accessibility
Log In Help Join The Motley Fool
Free Article Join Over 1 Million Premium Members And Get More In-Depth Stock Guidance and Research
By Jennifer Saibil - Feb 7, 2020 at 9:35AM

In another effort to use current retail trends, Nordstrom will start reselling clothing.

Trends in retail are evolving faster than you can say "Amazon," and it's widening the gap between those who can conform to the new non-conformity and those who have not been able to keep up.

Nordstrom (JWN 0.54%)is one of the retailers that has been trapped by its large-scale adherence to traditional retail, but it's been climbing its way out through innovative sales efforts and bold actions. Last week the company announced that it will open a second-hand sales boutique on site as resale has become an emerging trend. Is this the new way forward?

Whether it's called resale, second-hand, or the polite "pre-owned," the trend is gaining in prominence. The U.S. Chamber of Commerce, which calls the trend "re-commerce," says it's "the fastest-growing category in fashion retail." It defines "resale," the particular type of second-hand sales Nordstrom is engaging in, as the curated subset of the overall trend. 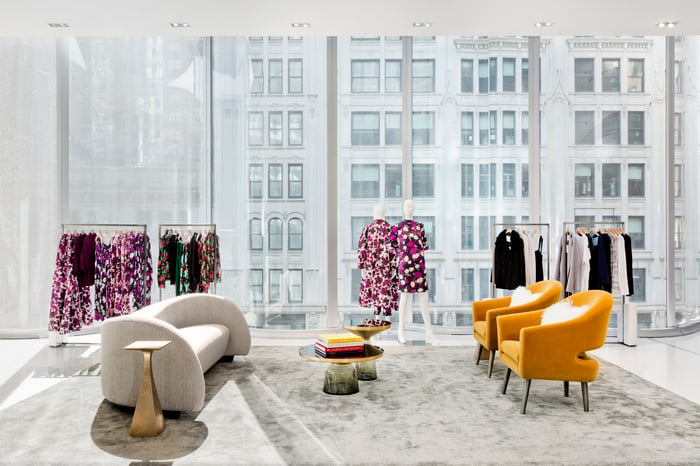 Bringing the movement online has become a big business, with popular websites such as ThredUp, Poshmark, and The RealReal offering thousands of new-again products.

Part of what's fueling the trend is a growing social responsibility among millennials. Another motive is that Americans have way too much clothing, and de-cluttering is gaining as a movement.

What's more, consignment company ThredUp recently released a report that states that the current $29 billion business is expected to reach $51 billion by 2023 and $64 billion by 2028.

Nordstrom launched its resale shop, called See You Tomorrow, on Jan. 31 in the New York City flagship store. The shop is managed by Yerdle, a resale management company that works with other resale shops as well, and the merchandise is available at that location and online.

The initial round of merchandise comes from Nordstrom Quality Center, the part of the company that processes returns and damaged items. All merchandise is refreshed for sale. Customers are invited to bring their own goods to sell in the New York City store in exchange for gift cards available to use at all Nordstrom-owned stores, and the program will soon support mailed-in merchandise.

Products on sale come from the apparel, shoes, and accessories categories and are curated by Vice President of Creative Projects Olivia Kim, who has spearheaded other innovative projects for Nordstrom. The shop is meant to be a complete experience, designed by an artist and including an on-site cafe.

What it does for Nordstrom

Nordstrom saw sliding sales in 2019 and has feverishly been attacking back with new initiatives to change the direction.

Erik Nordstrom, co-president, said: "Our market strategy is transforming our business model in how we're serving customers ... we are further linking our businesses to serve customers in new and differentiated ways."

Some of what the retailer has been doing includes:

See You Tomorrow is another potential revenue stream, and it also provides fantastic branding for the company as with it and socially conscious. Co-president Pete Nordstrom said, "We're excited to show our customers another way Nordstrom is striving to leave the world better than we found it and circular fashion is another piece to this puzzle."

The offensive strategy is paying off, at least in the short term. The third quarter of 2019 saw improvements in many areas, including higher sales growth than the beginning of the year, positive sales growth in the off-price division, and improved digital sales. Gross profit margin increased 100 basis points, and there were fewer full-price markdowns.

While See You Tomorrow may not alone be enough to tip the consumer discretionary company's sales in the right direction, it's another ally in its plan to stay relevant and keep its customers.