Please ensure Javascript is enabled for purposes of website accessibility
Log In Help Join The Motley Fool
Free Article Join Over 1 Million Premium Members And Get More In-Depth Stock Guidance and Research
By Nicholas Rossolillo - Feb 9, 2020 at 10:46AM

EA had a great quarter, thanks in no small part to Star Wars Jedi: Fallen Order.

As was to be expected, Star Wars: The Rise of Skywalker has been a hit. Paired with Frozen 2, Disney's (DIS 3.30%) "studio entertainment" segment doubled revenue and tripled operating profits during its fiscal 2020 first quarter. The movie has generated over $1 billion in global ticket receipts, normally hailed as a massive success. However, the movie is being panned as a "disappointment" by many, speaking to the times we live in -- not to mention the high bar that comes with all things Disney and its sci-fi fantasy franchise.

Yet opinions on the film are as wide-ranging as the audience that went to see it -- from "it was amazing" to "terrible." At the end of the day, it's the box office results that speak the loudest. $1.058 billion in receipts as of this writing is far less than either of the last two entries in the latest trilogy (Star Wars: The Force Awakens hauled in $2.07 billion back in 2015, and the hardcore fan-maligned Star Wars: The Last Jedi made $1.33 billion in 2017), and made hundreds of millions less than the average consensus forecast.

The film's less-than-anticipated haul likely has a lot to do with a rehashing of the original Star Wars trilogy, not to mention pacing that left little time for any actual storytelling or character development. However, it's unlikely that the franchise is dead. Disney+ had a huge 26.5 million subscribers in its first quarter of existence, thanks in part to the marquee Star Wars spinoff The Mandalorian. Fresh and original stories are obviously the key. The purest example of what Disney needs to do to get its franchise back on track, though, likely already exists over at Electronic Arts (EA 1.30%).

This is the adventure game you're looking for

One of the biggest anticipated game releases at EA in 2019 was the November release of Star Wars Jedi: Fallen Order. Per usual, the Star Wars brand was carrying high expectations, even though EA's earlier Star Wars games like Battlefront 2 didn't clear the bar and were met with criticism over the in-game money making scheme. Nevertheless, EA COO and CFO Blake Jorgensen had a very positive update for the new title on the last quarterly earnings update:

Sales of Star Wars: Jedi Fallen Order significantly beat our expectations. We had forecast six million to eight million units for the fiscal year, but hit the high-end of that in the third quarter and we now anticipate selling around 10 million units in the fiscal year, a very strong result for a single-player action game. 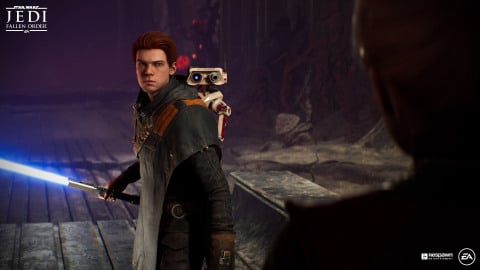 10 million units is still far from breaking into the list of top-selling games of all time (number 10 on the list is Activision Blizzard's (ATVI 0.35%) Diablo 3, which surpassed over 30 million copies sold three years after its 2012 release), but EA's updated outlook on the game is still sparkling. Assuming each copy sells for about $50 a pop, that's $500 million in gross sales alone from one single title in a less-than-six-month span. Revenue for EA's entire fiscal 2020 Q3 (the three months ended Dec. 31, 2019) were $1.59 billion, up 24% from a year ago, and earnings were up 37% year over year -- thanks in large part to Star Wars Jedi: Fallen Order.

Put simply, a quality Star Wars game -- which, by the way, got several nominations for potential video game of the year -- is powering EA back to growth. Trading for 18.1 trailing 12-month free cash flow, EA looks like a solid buy.

Second chances are allowed, and welcome

What's the key to Star Wars Jedi: Fallen Order's blockbuster success, though, especially given the apparent fatigue for Star Wars as of late at the box office? It's pretty simple: Fresh storytelling and quality game play. This is of course Star Wars, so familiar motifs are revisited and riffed on -- good versus evil, finding one's way in life, and redemption. But ultimately it's a new painting on the blank canvas that is the Star Wars universe.

Paired with the success of The Mandalorian, its mysterious masked protagonist, and of course "Baby Yoda," EA's video game hit makes it clear that fans of the franchise are looking for new material. Video games and TV streaming are obviously a whole different animal than the box office. The audience is different, pricing is different (especially considering what it costs to take a family to the local cinema these days), and thus the rules governing what equates to a profitable entry are different. Rather than shelling out hundreds of millions to produce a blockbuster that imitates what's already been done, perhaps Star Wars would best be served by slimming down and getting creative again.

It's worked for the Disney+ Star Wars show, and it's really worked for EA, so why not Disney's film studio too?