Please ensure Javascript is enabled for purposes of website accessibility
Log In Help Join The Motley Fool
Free Article Join Over 1 Million Premium Members And Get More In-Depth Stock Guidance and Research
By Will Healy - Feb 9, 2020 at 12:35PM

Spotify's ability to continue its rapid growth hinges on one thing.

Spotify (SPOT -1.75%) faces both a bright and uncertain future. Founded by Daniel Ek in 2006, the Sweden-based music streaming service has grown to 271 million users in 79 markets across the world. The user base, proprietary content, and partnerships have helped to bring Spotify growth. However, Spotify also faces the world's most powerful tech names as peers. These conditions make it likely that Spotify stock will trade at higher levels five years from now if it can manage to fend off its large competitors.

The rise of Apple's (AAPL 3.03%) iOS and Alphabet's (GOOGL 2.46%) (GOOG 1.92%) Android operating system turned Spotify into an app without an ecosystem. Since ecosystems place multiple functions under one umbrella, the prospects for Spotify became uncertain, as it was not linked to any OS.

Fortunately for its investors, Spotify did not cave to the pressure from Apple, Alphabet, or Amazon (AMZN -1.60%). Instead, it found another big tech company with which to partner: Samsung. Now that Samsung installs Spotify on all Samsung Galaxy phones sold in the U.S., millions of users gain exposure to the product as well as a free trial of Spotify Premium. Many investors are bullish about the benefits of this partnership for Spotify. 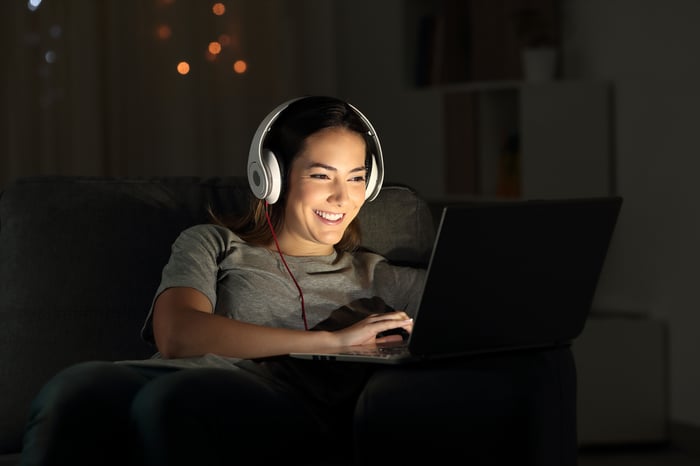 Over the next five years, the Samsung partnership could help Spotify stock rise from today's price of around $155 per share. First, the company could become profitable as early as this year. Second, Spotify's current market cap of roughly $28 billion values the company at just 3 times its projected 2020 revenue of $9.24 billion. Third, Wall Street forecasts call for average annual earnings growth of 130.55% over the next five years. If Spotify can come anywhere close to that level of earnings growth, the stock price could rise significantly.

However, this prospect still comes with significant risks. For all of its accolades, Spotify competes with three separate companies with massive profits, influential ecosystems, and market caps exceeding $1 trillion. For now, it remains a money-losing company worth a small fraction of these tech giants. Should it fail to maintain its alliance with Samsung, the prospects for Spotify could turn bleak overnight.

Spotify has engaged in legal disputes with Apple in both the U.S. and the EU. It began when Apple offered to pay major music labels to not renew contracts with Spotify that allow Spotify to play their music on its free tier.

So far, Spotify seems to be winning this battle, as Apple added Spotify integration to Siri last year. Still, the fact that Spotify has to wage this battle in the courts rather than in the marketplace speaks to its weaker position. Moreover, Samsung operated its own music service before it allied with Spotify. Hence, investors have to assume that Spotify needs Samsung more than vice versa.

Spotify does offer some proprietary content. It has taken a page from Netflix's strategy and begun to develop premium, exclusive content. To this end, it has purchased podcasting companies such as Gimlet and The Ringer.

Still, these podcasting companies account for a relatively small percentage of the company's revenue. That may keep Spotify in existence, but mere survival means little to investors. After all, Myspace remains an active site. However, Myspace has little chance of returning to prominence, let alone becoming a viable investment.

Spotify stock will likely trade at a higher price five years from now if it can manage its considerable risks. The stock should move higher as revenue growth and the alliance with Samsung help to drive massive profit growth.

However, Spotify faces risks as it competes with three of the largest companies in the technology industry. With these mega-tech companies controlling powerful ecosystems, the company depends heavily on one crucial partnership. In the end, the continuing alliance with Samsung could determine whether Spotify continues as a tech growth story or becomes the Myspace of streaming music and podcasting.