The Schick parent surged on better-than-expected earnings and an announcement that it won't pursue its acquisition of Harry's.

Shares of Edgewell Personal Care (EPC -3.71%) were soaring on Monday after the Schick parent said it would give up on its bid for Harry's, the direct-to-consumer razor company, and it reported strong first-quarter earnings. 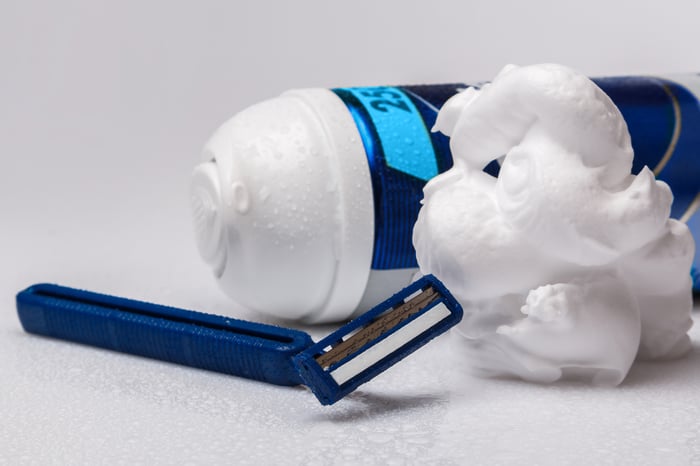 Edgewell, which also owns a number of household staples like the Hawaiian Tropic sun protection brand and feminine products like Playtex, called off its merger with Harry's a week after the Federal Trade Commission (FTC) said it would file a lawsuit to block the deal.

In a statement, CEO Rod Little said: "We are disappointed by the FTC's decision and continue to disagree with its position. After extensive consideration and discussion, and given the inherent uncertainty of a potential trial, the required investment of resources and time and the distraction that a continuing court battle would entail, we determined that proceeding with our stand-alone strategy is the best course of action for Edgewell and our shareholders."

Shareholders never seemed happy about the deal, in which Edgewell agreed to pay $1.37 billion in cash and stock for Harry's. The stock plunged last May when the merger was first announced.  Among other things, investors seemed to fear the increased debt Edgewell would have to take on to fund the acquisition, which was estimated in the $1 billion range. The stock also jumped last week when the FTC said it would try to block the deal, claiming that the combination would eliminate "one of the most important competitive forces in the shaving industry" in Harry's.

It's odd to see shareholders in such clear disagreement over an acquisition bid, and the leadership team is clearly not happy with the result of the Harry's deal. The FTC's decision was not without controversy since years earlier it had permitted Unilever to acquire Dollar Shave Club, a similar direct-to-consumer brand. It's unclear why that deal was allowed and the Harry's merger was blocked.

Edgewell stock is now up 48% since the FTC announced its decision, a clear sign that investors opposed the acquisition, but Edgewell's stand-alone strategy isn't entirely clear.