Please ensure Javascript is enabled for purposes of website accessibility
Log In Help Join The Motley Fool
Free Article Join Over 1 Million Premium Members And Get More In-Depth Stock Guidance and Research
By Rich Duprey - Feb 14, 2020 at 8:10AM

The FTC viewed the acquisition as anticompetitive, but blocking it leaves both razor and grooming companies in tougher positions.

Unilever (UL 0.35%) was allowed to acquire the arguably more prominent DTC razor brand Dollar Shave Club in 2016 because it has maintained its position as an online-only brand. Harry's, by contrast, started off as a DTC brand, but expanded into brick-and-mortar retail, and now generates half of its sales through retail partnerships with Target and Walmart. 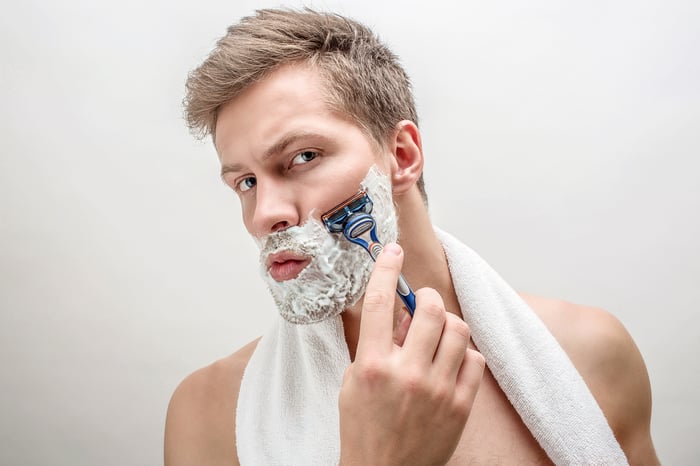 The FTC said that Harry's debut in the realm of physical retail stole shelf space from the dominant razor companies, and had the beneficial-to-consumers effect of forcing Edgewell and Gillette-owner Procter & Gamble (PG 0.93%) to end their joint practice of annual price increases.

Even though Harry's has a minuscule 2.6% market share, trailing Dollar Shave Club's 8.5%, the agency calls it a "uniquely disruptive competitor." Razor maker Bic might beg to differ. It previously said it was Edgewell's own private-label razors that were putting downward pressure on pricing.

A new way to shave

Still, it was Dollar Shave Club's audacious arrival on the market that upended the business of how razors were sold. It ceased to be an ever-escalating arms race focused on how many blades could be fit on the head of a razor, and became a battle over which company could offer a reasonably good shave at a low price.

The growing popularity of both Dollar Shave Club and Harry's compelled Gillette to form its own mail-order razor blade service, and while that might support the FTC's case that Harry's should stay independent, Procter & Gamble didn't view the acquisition as a threat to its dominance. On an earnings call last year, CEO Jon Moeller described the grooming category as competitive, but attractive, and said that Edgewell's plan to acquire Harry's wouldn't change that.

That's an understandable view to take, given that Edgewell only holds a combined 13.6% share of the razor market; even adding Harry's to its portfolio would have still left it running a distant second to Gillette, which has a 47% market share.

With the FTC blocking the deal, however, Harry's will be unable to access the broad distribution channels Edgewell enjoys; the direct-to-consumer company will have to approach new retailers on a case-by-case basis.

Also, Edgewell's sales have been declining, and in 2019, it posted GAAP losses totaling $353 million. To turn the business around, management has been exploring a strategy of broadening its scope beyond razors and into other personal care products. That plan will be more difficult to execute without Harry's.

A market with more competitors may be the FTC's goal, but that doesn't make them better competitors -- now, both companies are left to battle separately against Gillette and Dollar Shave Club.

Finding another way to grow

Since Edgewell has chosen to not challenge the FTC in court, Harry's has a few options if it wants to scale up further:

Finding another buyer would be difficult. The FTC would almost certainly block a purchase by Procter & Gamble or Unilever for the same reasons it opposed the Edgewell deal, though a private-equity firm could make an offer.

Pursuing an IPO is an option, but some might view the poor post-IPO performances of other DTC unicorns like Casper Sleep and Peloton Interactive as an argument against that course.

Harry's has also been through numerous financing rounds so far, raising some $475 million in venture funding. While it would be possible to dip into that market again, it might be more challenging this time, as the odds of a buyout now appear more remote.

Edgewell Personal Care's plan to buy Harry's made a lot of sense for both parties. Now, they will be forced to remain separate in competitively disadvantageous positions. That outcome can't be good for the marketplace.