Please ensure Javascript is enabled for purposes of website accessibility
Log In Help Join The Motley Fool
Free Article Join Over 1 Million Premium Members And Get More In-Depth Stock Guidance and Research
By Keith Speights - Feb 11, 2020 at 7:03AM

Warren Buffett doesn't own very many healthcare stocks. But DaVita (DVA -0.95%) has been in Berkshire Hathaway's portfolio for years. The dialysis services provider made the Nebraska billionaire a little richer last year, with DaVita's shares soaring 46%. The stock is off to a pretty good start in 2020 as well.

DaVita announced its 2019 fourth-quarter and full-year results after the market closed on Monday. Was the news good enough to keep the company's momentum going? Here are the highlights from DaVita's Q4 update. 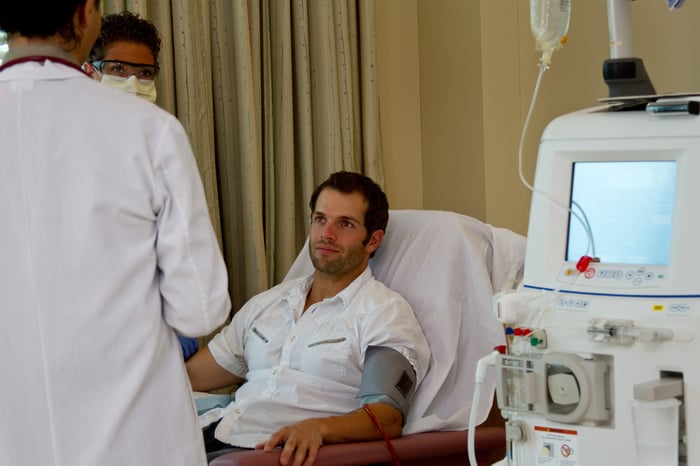 DaVita announced Q4 revenue of $2.899 billion, nearly 3% higher than the revenue of $2.82 billion reported in the same quarter of the previous year. The company's reported revenue was slightly lower than the average analysts' revenue estimate of $2.92 billion.

The company reported a net loss in the fourth quarter of $244.8 million, or $1.88 per share, based on generally accepted accounting principles (GAAP). This was an improvement of DaVita's net loss of $149.8 million, or $0.90 per share, posted in the prior-year period.

On a non-GAAP (adjusted) basis, DaVita's net income in the fourth quarter was $1.86 per share. This more than doubled the company's adjusted net income in the prior-year period of $0.90 per share. It also handily beat the consensus Wall Street adjusted Q4 earnings-per-share estimate of $1.66.

A couple of other factors also boosted DaVita's Q4 revenue at least somewhat. The company's provision for uncollectible accounts, which is subtracted out as part of the total revenue calculation, declined to around $2 million from $13.7 million in the same quarter of 2018. DaVita's other revenue in Q4 also rose to $132.6 million from $105.1 million in the prior-year period.

DaVita's GAAP bottom line in Q4 looked much better than it did in the same quarter of 2018 primarily because of a significant loss from discontinued operations in the year-ago period. However, it also helped that the company controlled its spending effectively, with operating costs basically flat year over year.

There are a couple of question marks for DaVita in this election year. One relates to an effort by the Service Employees International Union-United Healthcare Workers West (SEIU-UHW) to put an initiative on the California ballot in November that would impose restrictions on dialysis services providers. DaVita opposes this ballot initiative.