Nintendo shares fell after earnings, but its future remains powered up.

Shares of Japanese video game developer Nintendo (NTDOY -2.60%) fell after its fiscal third-quarter earnings report on January 30. The culprit? While Nintendo still reported strong results, they weren't quite as strong as analysts had expected.

Revenue actually declined in the December quarter compared with the prior year, though over the first nine months of the year, revenue was still up about 2.5%. While the company reported expanded margins, quarterly operating income of 168.7 billion yen -- good for 6.4% growth -- still fell a bit short of analyst projections for 175.4 billion yen.

Management also dispelled the rumor that it would unveil a new Switch model in 2020, contradicting reports from earlier in January and perhaps adding to the letdown. Finally, the company's small but promising mobile games segment grew just 10.6%, an underwhelming rate given the slew of new mobile games released this year, such as Mario Kart Tour.

However, while the results may have underwhelmed some, they may have been better than met the eye. Most importantly, management laid out some new strategic moves that could keep Nintendo's momentum going far into the future.

Here's why investors may want to put Nintendo on their watch lists after the post-earnings dip. 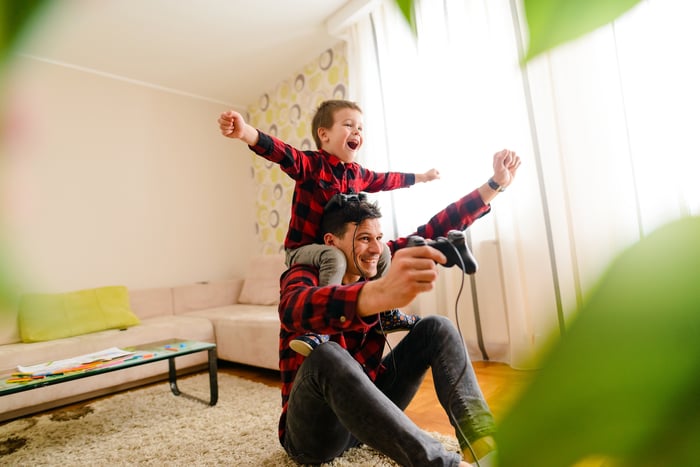 Why Nintendo can "switch" its fortunes

Some of last quarter's shortfall may be due to Nintendo's older and declining 3DS products, not the main growth driver going forward: the Switch. Management actually revised its outlook for Switch units upward for the full year (ending in March), from 18 million to 19.5 million units, and Switch software from 125 million units to 140 million units. However, the older 3DS platform, which makes up a much smaller portion of Nintendo's sales, was revised down from 1 million to 0.65 hardware million units, and from 5 million to 4.5 million software units. So, it very well could be the older 3DS platform that caused some of the shortfall. As the older 3DS makes up an increasingly negligible portion of revenue, the Switch can take over more of the company's overall results.

Taking a nine-month view, the company's results look much better. Nintendo's September quarter was much better than anticipated, with some sales perhaps pulled in due to the rise in the Japanese consumption tax on October 1. The first nine months of 2019 still saw huge growth in Switch units sold, up 23% in Japan, up 16% in North America, and up 15% in Europe. Meanwhile, Nintendo's first-party Switch software units were up 26% over 2018, and third-party software units were up 50%.

Management also sees the potential for the Switch platform to last longer than previous consoles. This is because the Switch and Switch Lite models are more versatile than older consoles, allowing for a wider range of consumers to play however they wish -- as a handheld device, a console, or in tabletop mode. Having one versatile platform, rather than separate handheld and console platforms, enables all of Nintendo's resources to be focused on software development for the Switch. This has enabled a variety of games and styles of play, which management believes will prolong the life of the Switch and expand its appeal.

Finally, in what could be a hugely consequential long-term strategic shift, Nintendo management also said that it will actually loosen its policy on putting its characters in movies, theme parks, and other consumer discretionary entertainment outlets.

For most of its corporate life, Nintendo has tightly guarded its characters, believing only Nintendo game developers knew how best to present Mario, Zelda, and other beloved characters to the world. While it's good that Nintendo is so diligent about protecting its brand, this stance has also limited revenue opportunities.

Yet on the recent conference call, former president and current Nintendo representative director and fellow Shigeru Miyamoto signaled a change on this front:

... my way of thinking changed, and it's not so much that I wanted to make a Mario movie, but that I felt Nintendo should have more video content. More people will have access to our IP with video content, and so the number of people who will come into contact with Nintendo IP will continue to expand. As this happens, we believe that the most important thing for us will be to keep a firm hold of our rights. A critical aspect of our strategy is making our rights clear while creating content.

This could be the big news that the market is missing. In its earnings presentation, Nintendo revealed that it's working with production company Illumination and Universal Studios on an animated movie set for 2022. Additionally, Nintendo is constructing Super Nintendo World at Universal Studios Japan, which will open later this year.

If Nintendo can successfully leverage its backlog of beloved characters from 40 years in the game business to develop films, theme parks, smartphone apps, and others, it could develop entire new growth segments for established characters, a strategy Disney (DIS -2.14%) has executed perfectly.

Nintendo hasn't had much success outside of video games just yet, and it's unclear if it can execute on these new fronts. After all, the company has even had trouble monetizing its new mobile games, though it's still early innings on that front. However, should Nintendo find success with its more diversified entertainment strategy, Nintendo and its stock price could get a big rerating from both consumers and investors alike.