Please ensure Javascript is enabled for purposes of website accessibility
Log In Help Join The Motley Fool
Free Article Join Over 1 Million Premium Members And Get More In-Depth Stock Guidance and Research
By Adria Cimino - Feb 11, 2020 at 8:00AM

Biogen’s victory in a patent case involving its blockbuster multiple sclerosis drug is positive, but other uncertainties are waiting in the wings.

Biogen (BIIB -1.51%) shares surged as much as 32% on Wednesday after the company won a patent challenge to its billion-dollar multiple sclerosis (MS) drug, Tecfidera. The stock finally closed 18% higher and has since gained 1.5%. The U.S. Patent and Trademark Office's patent trial and appeal board ruled in favor of Biogen in the case brought by generic-drug maker Mylan (MYL). Unless an appeal by Mylan or other ongoing patent challenges results in a different ruling, this means Biogen can stave off Tecfidera competition until patent expiration in 2028. 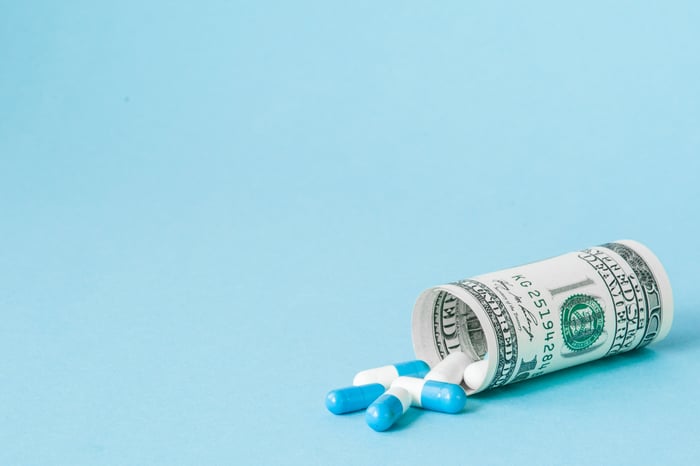 Any patent victory is good news, but this one is particularly significant since Tecfidera, generating $1.2 billion in revenue in the latest quarter, made up 40% of total product revenue. Though Tecfidera is a leader, the MS market is crowded, with the drug facing competition from Roche's (RHHBY -1.73%) Ocrevus and Novartis's (NVS 0.21%) Gilenya, among others. Tecfidera generates $4.4 billion per year, while those two competitors generate $3.8 billion and $3.2 billion, respectively. Though this patent win lifts one gray cloud that was hanging over Biogen, others remain: Mylan reportedly plans to appeal the decision. The generic-drug maker also is currently challenging Tecfidera in a West Virginia federal court, and other companies are challenging the patent in Delaware.

While it's important that Tecfidera continues as a revenue driver for Biogen at the moment, the real focus should be on sales of the company's new MS drug, Vumerity, in the coming quarters. Vumerity, a fumarate drug like Tecfidera, provides the same efficacy -- but it has demonstrated fewer gastrointestinal side effects. To maintain MS dominance, Biogen now has the big task of progressively transferring patients from Tecfidera to this newer option. The longer Biogen can hold onto the Tecfidera patent during this process, the better -- for earnings and therefore its share price. The U.S. Food and Drug Administration (FDA) approved Vumerity in October, and the product's first quarter on the market generated $5 million; it will take time to see if this new treatment can indeed reach the sales levels of the current blockbuster.

Aside from the ongoing patent cases regarding Tecfidera, the other uncertainty Biogen faces is the future of its investigational Alzheimer's disease drug, aducanumab. The company shocked investors last year when it revived the program and said it would submit aducanumab to the FDA in early 2020. Earlier, Biogen said the drug didn't work and ended clinical trials, but then it examined broader data and determined higher doses of the drug reduced patients' clinical decline. Experts are divided on whether aducanumab has a shot at FDA approval, and any news one way or the other could be a positive or negative catalyst for Biogen shares in the coming months.

So was the 32% intraday surge an overreaction?

Probably. Writing ahead of the decision, SVB Leerink analyst Geoffrey Porges, who expected Biogen to prevail, had predicted a 5% share gain on a victory and a 12% decline on a loss of the review and appeal. Instead, the shares leaped past Wall Street's average price estimate and are now trading 2.7% higher than that forecast.

Though the Tecfidera patent win is definitely a positive for Biogen, it doesn't change the fact that the company still faces additional challenges to the patent. And the future of aducanumab still represents uncertainty in the months ahead. Prior to this week's surge, Biogen was a stock to buy for short-term investors, who could benefit from day-to-day price shifts, and long-term investors, as the company makes a solid biotech play, offering product, pipeline, and earnings. But after this recent surge, investors might want to wait for a bit of weakness for a new entry point.