The luxury brand looks to sew up Millennial sales with an appeal to the young and digitally connected.

Mixing computers and couture, Ralph Lauren (RL -0.28%) set out three years ago to start appealing to Millennial shoppers while building sales through its digital division. Now both those efforts seem to be paying off. Though the company's international sales dropped because of Asian troubles, CEO Patrice Louvet recently reported positive results from its continued focus on its digital initiatives. But while the explosive popularity of online shopping clearly makes this a key way to remain chic, and profitable, into the future, the fashion house still needs to prove its implementation is sound.

The digital outlook and the Way Forward Plan

Digital accessibility has clearly become as crucial as physical boutiques in an era when, according to research, over 76% of Americans buy products online, with 16% doing so at least weekly. According to Forrester research, mobile shopping on smartphones will skyrocket to $209 billion in 2022, up from $117 billion in 2018. While older Americans' shopping habits aren't as fossilized as stereotypes would have us believe, with 66% of "Boomers" shopping regularly online, "Millennials" and "Generation Z" still outpace them in using social media and the Internet to research products they want to buy. Around 90% of Millennials use online reviews to research purchase decisions. Ralph Lauren's strategists are right on the money when they say the company needs to strengthen digital integration if it wants to achieve popularity among the rising generations, too.

Ralph Lauren's refocus away from the brick-and-mortar and toward a vigorous e-commerce presence began nearly three and a half years ago, in mid-2016. Income growth had been negative since 2014, with the company losing approximately 4% of its income annually. Taking bold action during his brief tenure as CEO, Stefan Larsson launched the Way Forward Plan, designed to chop out the deadwood by closing some retail outlets, streamlining and rationalizing management and supply, and other efficiency-boosting measures. 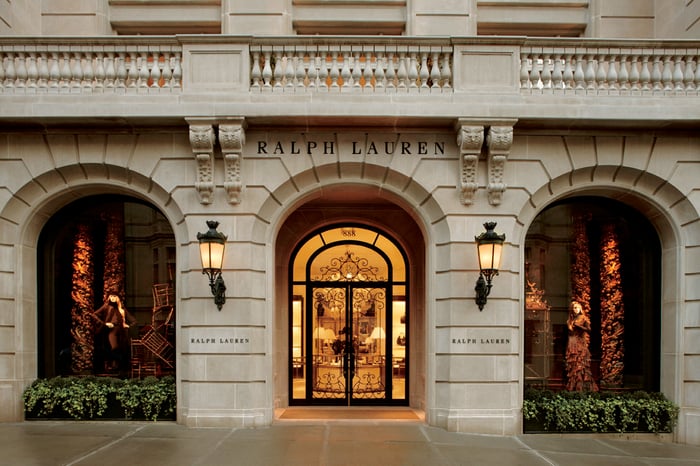 After Larsson's departure from the company in May 2017, new CEO Patrice Louvet opted to continue with the Way Forward Plan. At the same time, the company's executives decided to incorporate strong development of e-commerce and digital selling platforms into the Plan, instead of focusing mainly on physical retail locations, as the original version did. The company estimated restructuring costs at $370 million to $400 in total.

Putting the plan into action

Ralph Lauren's aggressive push into e-commerce, carving out a bigger digital presence, is well under way -- and, according to company executives, it's boosting sales according to plan. Louvet highlighted the importance of using the electronic initiative during Ralph Lauren's fiscal Q3 2020 earnings call on Feb. 4, when he said, "We continue to build partnerships with newer digital platforms in North America, which are extending our reach to new and younger consumers."

In addition to selling online, the company made it easier for people to find out information about their products using their smartphones or other electronic devices. For instance, it introduced Digital Product Identities during late 2019, letting shoppers verify the authenticity of a Ralph Lauren garment by scanning a QR code on the label with their smartphone. It also worked to increase its popularity with younger shoppers by featuring its products at the celebrity wedding of actors Nick Jonas and Priyanka Chopra, .

While most sales still occurred in brick-and-mortar stores, the company's Q3 2020 earnings report showed much faster growth in online sales than offline purchases. Comparable-store sales figures show brick-and-mortar increases of 4% in North America and 2% in Europe, while online sales in those regions jumped by 6% and 15%, respectively. Asian online sales exploded by 36%, but overall, net regional sales shrank 1% year over year, driven down by political and trade turmoil in Ralph Lauren's major regional market, Hong Kong.

Overall, Ralph Lauren's strategies seem to be working. Net margin rose to more than 10% by Dec. 31, 2019, its highest level since 2011. Its adjusted earnings per share (EPS) reached $2.86, up 23% year over year. The company is also carrying out a share repurchase program, buying back $98 million in shares during fiscal Q3 2020 and with $732 million still earmarked for future buybacks.

Investors may like the cut of Ralph Lauren's operations

While Asian profits proved somewhat threadbare for it in 2019, Ralph Lauren's overall strategy seems to be working as intended. Digital sales rose strongly, intertwined with the company's efforts to boost the label's popularity with the younger shoppers crucial to its ongoing success, helping to boost the company's success, profits, and net margin.

With these intelligently executed initiatives under way and the company's balance sheet showing their positive impact already, Ralph Lauren looks like a potentially attractive, though not yet top-tier, pick for people investing in consumer discretionary stocks.  Rather than falling by the wayside as times change, the fashion company seems determined to adapt and thrive.