Please ensure Javascript is enabled for purposes of website accessibility
Log In Help Join The Motley Fool
Free Article Join Over 1 Million Premium Members And Get More In-Depth Stock Guidance and Research
By Amar Khatri – Feb 12, 2020 at 8:00AM

Which biopharmaceutical company is a better long-term value?

Gilead Sciences (GILD -1.34%) and AbbVie (ABBV -1.30%) are two of the world's largest pharmaceutical stocks by market capitalization. AbbVie is the bigger of the two, at $139 billion to Gilead's $86 billion, and its stock value has grown significantly over the past year.

When considering the long-term prospects, is either company a better fit for your portfolio? Here are the key takeaways on Gilead Sciences and AbbVie. 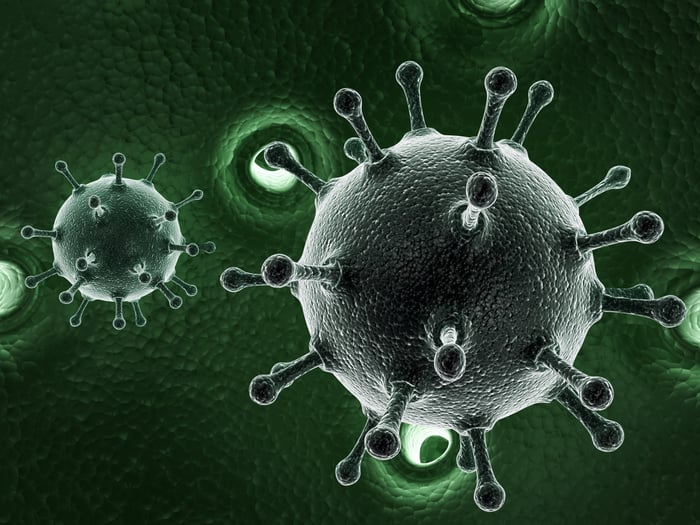 Gilead Sciences and AbbVie each have very diversified portfolios, offering medicines across various highly competitive markets. Their products match up most closely in the spaces of human immunodeficiency virus (HIV), hepatitis C virus (HCV), and oncology. Along with Merck (MRK -0.16%), Gilead and AbbVie are highly competitive in the HCV space in particular.

A head-to-head race in HCV treatment

Hepatitis C is a blood-borne viral infection that causes damage to the liver, and more than 2.7 million people in the United States live with the disease.

Gilead had first-mover advantage in this space by being first to market with its Sovaldi drug after its approval in 2013. Shortly after, Gilead developed another HCV drug known as Harvoni that combines the use of Sovaldi and other antiviral medicines. The company generated record profits from both of these drugs -- $19.1 billion in 2015 alone -- before competitors AbbVie and Merck joined the HCV scene.

Sales of Gilead's products began to decline when AbbVie's HCV drug, Mavyret, was approved in 2017; changes to insurance coverage also reduced usage of HCV drugs, making them less lucrative overall. AbbVie's rise in the HCV market led Gilead to take the unexpected step of developing its own HCV generic drug, Epclusa, which would allow it to compete with AbbVie's Mavyret at a lower price and under similar indications to treat six different forms of HCV.

The usage of Epclusa in state-managed Medicaid plans boosted Gilead's total prescription numbers, while AbbVie's suffered a 16.3% decline in Q3 2019. Full-year HCV product sales for both companies were tied at $2.9 billion in 2019, lower than in 2018, when AbbVie hit $3.6 billion and Gilead notched $3.7 billion.

Gilead CEO Daniel O'Day expects to take advantage of the regained market share from this strategy to focus on geographic expansion in China going forward. Both companies expect declining sales of HCV products, with AbbVie looking for a global total of about $2.5 billion in 2020 and Gilead sustaining its current sales.

How they could grow

Gilead leads the way in HIV drugs, with product sales in that division increasing to $16.4 billion in 2019 from $14.6 billion in 2018. O'Day noted in the most recent earnings call that the company is working on 14 late-stage studies -- including HIV drugs, other antivirals, immuno-oncology drugs, and drugs to treat inflammation and fibrosis -- this year, with four receiving a "breakthrough" designation from the U.S. Food and Drug Administration (FDA) to expedite their progress. "Over the next 10 years, we aim to introduce 10 new transformative therapies," O'Day said.

Gilead's pipeline is largely focused on viral diseases, inflammation, oncology, and fibrotic diseases, all of which bode well for long-term growth. Most recently, the company submitted a new drug application for a compound called filgotinib, which is a treatment for moderate to severe rheumatoid arthritis (RA). The filing shows promise, and it's supported by a 52-week study showing that the compound met its targets for efficacy and safety. The drug is also under review in Japan and the European Union, so an approval could provide significant growth for Gilead in the long run.

Gilead currently has $25.8 billion in cash on the balance sheet. Could this be used to acquire new assets? Investors should keep an eye on the current management. O'Day, who is completing his first year as CEO at Gilead, was formerly CEO at Roche and has held many leadership roles since joining the company in 1987; his experience overseeing a portfolio of various therapeutics in the fields of oncology, hemophilia, and many others, and his expertise in increasing revenue and building top-selling drugs, offer positive signs for the company and its long-term prospects.

AbbVie's growth prospects may be more mixed; its top-selling drug, Humira, comes off of patent protection in 2023. It's facing biosimilar competition across Europe and other international markets, which CEO Richard Gonzalez noted in 2018 "represent approximately 75% of our international Humira business or approximately 25% of total global Humira revenues."  While U.S. Humira sales were $4 billion, up 9.8% from 2018, the drug only posted $948 million in sales internationally, a decrease in revenue of 27.3% year-over-year, in Q4 2019.   The effect of biosimilars has a significant effect on AbbVie's business. In 2018, Humira accounted for roughly 61% of the business; over the past year, it only made up about 45%.

AbbVie brought six new assets to market in 2019 in the fields of immunology, oncology, dermatology, HCV, and women's health; collectively, these brought in about $9 billion in sales, and they can be expected to drive growth for the company in the long term. But questions remain on whether these assets and potential new drugs can fill the void that Humira will leave in 2023 -- can all of them combined make up for the 45% to 60% of company revenue currently generated by its blockbuster?  Only time will tell, so investors should proceed with caution when considering AbbVie as a long-term investment.

Gilead's forward price-to-earnings (P/E) ratio, a measure of share price relative to per-share earnings, is 10.8. Compared with AbbVie's 9.7, this shows that analysts expect Gilead to achieve higher earnings in the future. Looking further, AbbVie's price-to-sales (P/S) ratio of 4.1 is slightly higher than Gilead Sciences' 4.0. The P/S ratio is a useful measure of whether an investment is an attractive valuation; less than 1 is considered favorable, and greater than 4 is unfavorable. Both companies look overvalued by this measure -- but there's another method to further understand their valuation.

Biotechnology companies are difficult to value with only a few simple metrics because of the amount of debt they carry. EV/EBITDA (enterprise value / earnings before interest, taxes, depreciation, and amortization) can provide a more accurate measure of a biotech's true value (experts often use discounted cash flow (DCF) as another measure, as well). EV/EBIDTA is useful compared with P/E and P/S because it considers a company's debt and cash as well as the stock price relative to its cash profitability. A ratio of less than 10 is considered favorable. At 10.4, AbbVie has a lower EV/EBITDA ratio than Gilead Sciences' 14, which implies that the former stock is closer to fair value than the latter.

Dividend yield is also worth considering; there, AbbVie's 5.4% bests Gilead's 4%, meaning the former company may be more focused on the needs of its shareholders.

Despite that, Gilead Sciences offers the best option for long-term investment. The company's focus on transformative therapies over the next 10 years shows that it is positioning itself for long-term success, and its strategies can be very creative, as seen with its HCV drugs. CEO O'Day's experience at Roche and Gilead's current pile of cash are promising signs for future opportunities for new acquisitions. Its small portfolio may outpace AbbVie's larger one in the long run, especially with Humira due to expire in three years -- a risk for long-term investors, as the drug brought in roughly 45% of the company's revenue in 2019.

AbbVie may provide a better short-term option with its six new assets, attractive valuation, and higher dividend yield, but the mixed results from Humira will mean ongoing uncertainty over the long term. Gilead, meanwhile, should be able to follow the success of its medicines for HIV, HCV, and RA to reach new heights once again.