Please ensure Javascript is enabled for purposes of website accessibility
Log In Help Join The Motley Fool
Free Article Join Over 1 Million Premium Members And Get More In-Depth Stock Guidance and Research
By Keith Speights - Feb 12, 2020 at 11:34AM

The healthcare giant had good news in Q4, but achieving growth going forward could be more challenging.

CVS Health (CVS 1.92%) delivered solid quarterly results throughout 2019 and reported impressive revenue and earnings beats in the third quarter. But that financial success didn't translate to stock performance as much as investors would have liked. CVS Health shares finished last year up 13% but lagged well behind the S&P 500 index.

The healthcare giant announced its 2019 full-year and fourth-quarter results before the market opened on Wednesday. And yet again, CVS delivered a solid performance. Here are the three most important things to know about the company's Q4 update. 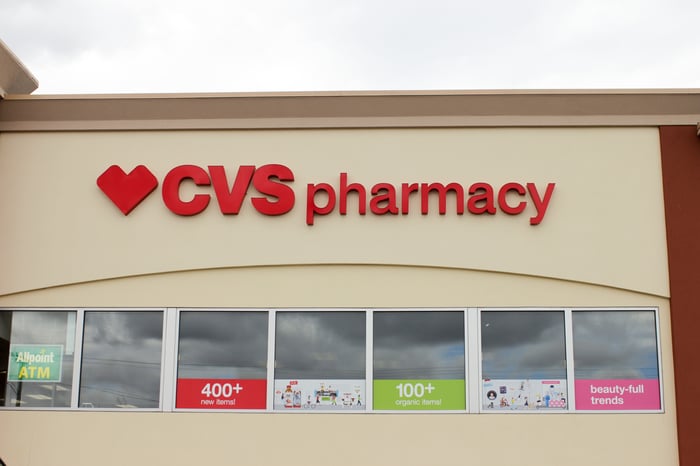 CVS Health's weakest unit in Q4 was its retail/long term care (LTC) segment. Revenue for the segment totaled $22.6 billion in Q4, up 2.5% year over year. While the retail/LTC segment benefited from increased prescription volume and higher drug prices, its growth was held back by nonstop reimbursement pressure and a higher generic dispensing rate.

The average analysts' estimate called for CVS Health to report Q4 adjusted earnings per share (EPS) of $1.68. CVS Health easily beat that estimate, reporting adjusted EPS of $1.73 in the fourth quarter. This result reflected a sharp decline from the adjusted EPS of $2.14 reported in the prior-year period. However, the 2018 Q4 result was boosted by an adjustment of $1.98 related to goodwill impairment.

According to generally accepted accounting principles (GAAP), CVS Health reported net income of $1.74 billion, or $1.33 per share. This was a big improvement from the GAAP net loss in the prior-year period of $421 million, or $0.37 per share. That net loss, though, was caused by goodwill impairment.

3. Guidance not quite up to par

CVS Health CEO Larry Merlo stated, "As a result of the significant progress we made in 2019, and meeting or exceeding our expectations for the year, we raised our outlook for 2020." The company expects full-year 2020 GAAP operating income will be between $12.8 billion and $13 billion. The company projects that adjusted operating income in 2020 will be between $15.5 billion and $15.8 billion. Cash flow from operations is anticipated to be in the range of $10.5 billion to $11 billion.

The main numbers investors were interested in with CVS' guidance, though, related to the bottom line. CVS expects GAAP diluted EPS from continuing operations for full-year 2020 will be between $5.47 and $5.60, with adjusted EPS between $7.04 and $7.17. The midpoint of the company's adjusted EPS range reflects only a tiny year-over-year increase. It was also below the Wall Street consensus estimate for full-year adjusted EPS of $7.15.

It's going to be much harder for CVS Health to report solid revenue and earnings growth in 2020 because it won't benefit from prior-year comparisons that don't include revenue from Aetna. The key to the company's success will be winning customers' business through new products and services.

The biggest wild card for CVS Health this year, though, could be the U.S. presidential election. Healthcare stocks, including CVS, could be highly volatile as prominent presidential candidates push for single-payer healthcare and potentially attack PBMs.