Please ensure Javascript is enabled for purposes of website accessibility
Log In Help Join The Motley Fool
Free Article Join Over 1 Million Premium Members And Get More In-Depth Stock Guidance and Research
By Taylor Carmichael - Feb 12, 2020 at 10:43AM

Antibody-based treatments can be used both to protect people from infection and to treat those already affected.

Vir Biotechnology (VIR -2.04%) announced Wednesday morning that its researchers have identified two monoclonal antibodies (mAbs) that bind to the SARS-CoV-2 spike protein found on the surface of the coronavirus that the World Health Organization officially named COVID-19 this week.

The disease, first identified in Wuhan, China, has killed more than 1,100 people and infected more than 45,000 worldwide.

"We are pleased that, using the same platform that was used to isolate mAb114, which has proven to be active against Ebola, we have quickly identified antibodies with potential biological activity against SARS-CoV-2," said Chief Scientific Officer Herbert "Skip" Virgin. "We are working as rapidly as possible and look forward to sharing more information as we have it." 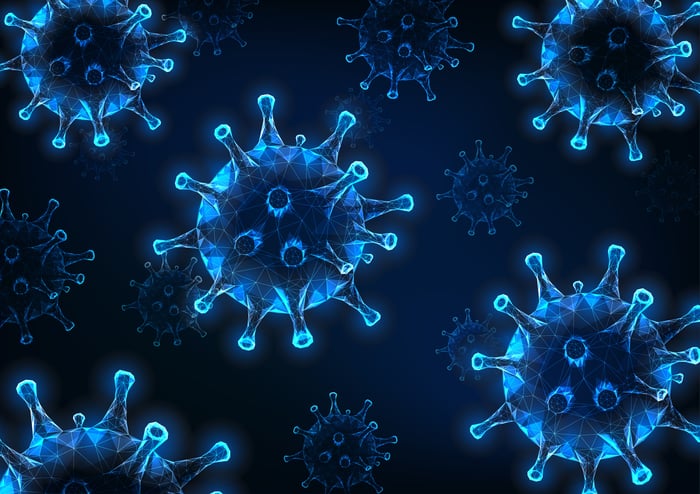 Using antibodies instead of vaccines

Vir has a library of 20 antibodies that bind to and neutralize various coronaviruses that cause diseases like SARS (Severe Acute Respiratory Syndrome). These antibodies are found in people with unusually successful immune responses to infectious diseases. Drugs based on mAbs differ from vaccines, and have attributes that make them particularly valuable in pandemic situations. Both vaccines and antibodies are prophylactic -- i.e., they prevent people from getting infected. But antibodies can also be therapeutic, helping treat those who have already been infected.

Antibody treatments also work more rapidly. While a vaccine triggers a response from the individual's own immune system, it can take weeks for that response to build up to a level that provides a good defense. By contrast, antibody treatments provide the immune response and can be effective in a matter of hours.

"We are in the process of assessing neutralization with a pseudo-virus," said Vir CEO George Scangos. "In addition, we are working with international partners to assess the capacity of these antibodies to neutralize the live virus, SARS-CoV-2."

Vir Biotechnology was trading about 4% higher as of 10:30 a.m. EST Wednesday.