Please ensure Javascript is enabled for purposes of website accessibility
Log In Help Join The Motley Fool
Free Article Join Over 1 Million Premium Members And Get More In-Depth Stock Guidance and Research
By Daniel B. Kline - Updated Feb 13, 2020 at 12:05PM

The space is getting awfully crowded.

Kellogg (K 0.20%), the company that brings you Frosted Flakes and Lucky Charms, wants consumers to make healthier choices at least when it comes to the meat they eat. The company has launched Incogmeato by MorningStar Farms, a line of plant-based meats that includes burger patties that need to be cooked and pre-cooked "Chik'n" tenders and nuggets.

It's an effort to win a piece of a business in a category that has been pioneered by Beyond Meat. 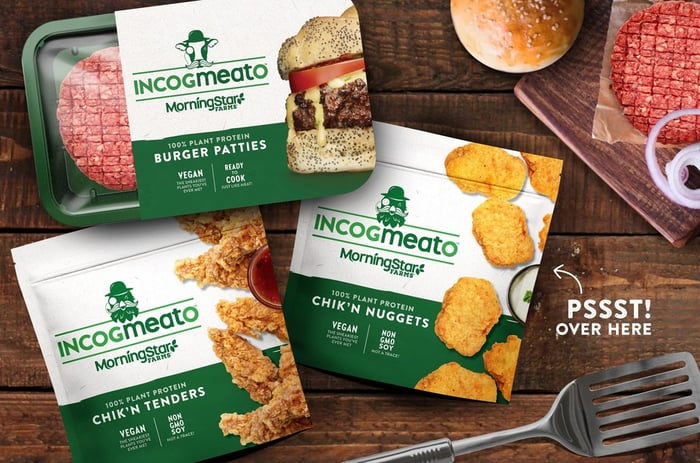 Kellogg is making an effort to bring plant-based meats to the masses. Its line will be sold in grocery stores and the company's deep reach may give its products broader exposure than Beyond currently gets.

"We know that about three-fourths of Americans are open to plant-based eating, yet only 1 in 4 actually purchase a plant-based alternative," said MorningStar Farms Plant-Based Proteins General Manager Sara Young in a press release.

Young called the number one barrier to consumers trying plant-based alternatives "taste." She explained that people are willing to forgo animal-based meat but want the same "amazing taste, texture, and sizzling qualities of meat but want a better alternative for themselves and the planet."

Kellogg can position its products as more mainstream and less highfalutin than Beyond's. That may not be fair but Morningstar is a mass-market brand that profits from the reach of its parent company.

In theory, Incogmeato will help grow the category and that may ultimately benefit Beyond Meat. If more people eat plant-based meats, they may be willing to try different brands and that could lead to multiple winners in the space.