Please ensure Javascript is enabled for purposes of website accessibility
Log In Help Join The Motley Fool
Free Article Join Over 1 Million Premium Members And Get More In-Depth Stock Guidance and Research
By Brent Nyitray, CFA - Feb 13, 2020 at 6:00AM

Last year was fantastic for private mortgage insurers. Will 2020 be even better?

MGIC Investment Corp. (MTG -1.35%) reported fourth-quarter earnings of $0.49 a share, easily surpassing Wall Street expectations of $0.43 a share. A combination of increasing insurance policies and a drop in mortgage delinquencies drove the increase. The company also announced a $300 million stock buyback through 2021.

A strong economy and real estate market support the business

MGIC is a mortgage insurer (you might have noticed on your mortgage statement something called PMI, or private mortgage insurance) that covers losses for the lender in the event you default on your mortgage. The biggest drivers of delinquencies and defaults are falling home prices, natural disasters, and recessions. Last year was exceptionally favorable for mortgage insurers in that the economy was strong, the hurricane season was not as intense as in 2017, and home prices continued to appreciate. About the only negative was the drop in interest rates, which caused many of MGIC's insurance policies to be canceled early due to refinances. 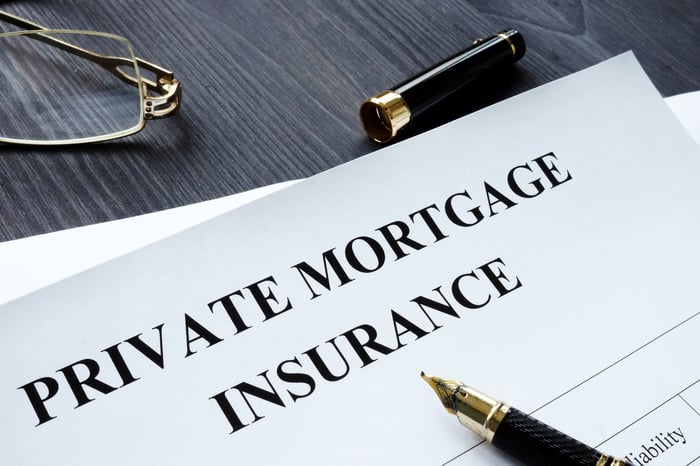 The upcoming year should also be favorable for the mortgage insurance business. Given that rates have fallen and appear to not be going up anytime soon, the mortgage origination business should remain robust. The lack of housing supply means that home prices are well-supported, and a tight labor market will keep defaults low. Of course there is always the possibility of a natural disaster, which can cause a wave of defaults, but that is impossible to predict.

The open question for mortgage insurers is how reform of the housing finance system will play out. The process of releasing the government-sponsored entities Fannie Mae and Freddie Mac from conservatorship will be messy and will touch every facet of the mortgage business. Overall, this should be good for private mortgage insurers in that the government wants to reduce its footprint in the mortgage market. It would prefer more private companies take up the risk of mortgage insurance instead of the taxpayer. As of now, private mortgage insurance is generally required only for loans with little equity -- typically less than 20%. Once the borrower has paid off enough of the mortgage to gain at least 20% equity, the insurance policy is then canceled. Replacing Fannie and Freddie with new mortgage insurers will certainly be difficult. Last year, $2 trillion worth of mortgages were originated in the U.S., and the vast majority were guaranteed by Fannie and Freddie. In comparison, MGIC insured $15 billion in original risk in 2019. Finding the private capital to bear all of that risk will be a huge lift.

Defaults are the lowest since the early 2000s

The mortgage insurance industry is benefiting from the lowest default rates in decades. According to data from financial services company Black Knight, the foreclosure rate is the lowest since early 2005, and the number of loans in some stage of delinquency (2.05 million) is the lowest since well before the financial crisis. Lower rates, low defaults, and a strong economy should mean good things for MGIC going into 2020.