Please ensure Javascript is enabled for purposes of website accessibility
Log In Help Join The Motley Fool
Free Article Join Over 1 Million Premium Members And Get More In-Depth Stock Guidance and Research
By Adria Cimino - Feb 13, 2020 at 7:00AM

Sanofi is betting on its eczema drug to redefine the company and boost revenue -- even with competition on the horizon.

Diabetes treatment was once a major part of drugmaker Sanofi (SNY 1.55%), with its blockbuster Lantus bringing in $7 billion in annual sales as recently as six years ago. These days, Lantus' annual sales are more in the area of $3.2 billion, and in December, the company announced it would end its diabetes and cardiovascular research programs. The French drugmaker, with Paul Hudson at the helm since September, has turned a good share of focus to its eczema drug, Dupixent. 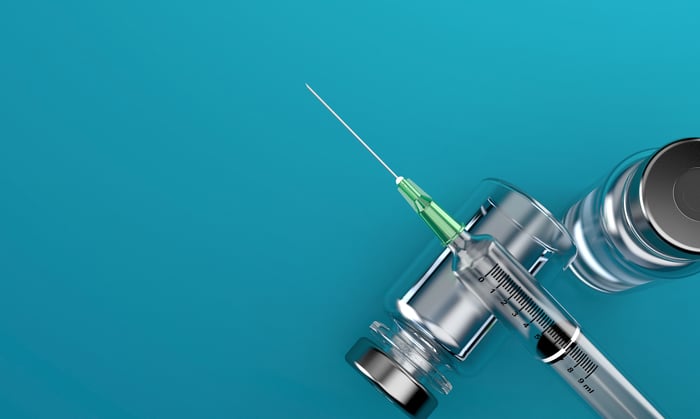 So far, the numbers are promising. Dupixent's fourth-quarter sales surged 135%, annual sales soared 152% to $2.3 billion, and according to Sanofi, the drug is on its way to the goal of generating peak sales of $11 billion.

Dupixent is currently approved for adult atopic dermatitis (also known as eczema), asthma, and nasal polyposis, but Sanofi has started pivotal studies in three more indications: prurigo nodularis, chronic spontaneous urticaria, and bullous pemphigoid. Sanofi estimates that there are about 400,000 people in the U.S. with these allergic skin disorders who could benefit from the drug.

If those studies are successful, the company aims to submit data for regulatory approval in either 2021 or 2022. Sanofi also has submitted Dupixent to the U.S. Food and Drug Administration (FDA) as well as the European regulatory agency as the first biologic to treat children aged six to 11 with atopic dermatitis.

At this point, with Dupixent launched mainly for eczema in 34 countries, if Sanofi's bet is right, we are still in the early days for what may be a very wide-reaching treatment in the area of dermatology. About 89 country launches across indications including adult and adolescent atopic dermatitis and asthma are planned for this year alone.

The global atopic dermatitis market is expected to reach $18.3 billion by 2027, according to GlobalData research. Is it possible Dupixent can capture more than half of it? Though the future looks bright, competition from new drugs may be on the horizon. Dermira (DERM) received fast-track designation for its eczema treatment, lebrikizumab, in December. Lebrikizumab is currently being studied in two phase 3 trials, and like Dupixent, it treats moderate-to-severe atopic dermatitis.

Dupixent and lebrikizumab both block the action of a type of protein called an interleukin, halting the immune system overreaction that results in eczema. Pharma giant Eli Lilly (LLY 1.11%) clearly sees potential in lebrikizumab because it recently said it would acquire Dermira for $1.1 billion. Also significant is the fact that Lilly, with a market cap of $138 billion compared to $128 billion for Sanofi, has the resources to offer the drug, if approved, a big launch.

Pfizer (PFE 1.00%) is another major player in the field. The company expects to report pivotal top-line results for potential rival abrocitinib in the first half of this year. Abrocitinib works by inhibiting Janus kinases, or JAKs, which are cell-signaling enzymes. The Lilly and Pfizer drugs are just two possible rivals; other drugs currently in clinical studies may result in an even more competitive market a few years down the road.

So which drug has the best chance of taking the largest share of the market? Some say Dermira's lebrikizumab may benefit from a more convenient dosing schedule: the possibility of a once-a-month injection versus Dupixent's twice-monthly injection. As for Pfizer's JAKs inhibitor, it might face the problem of guilt by association. Some may worry about safety issues that have come up with JAKs inhibitors in the treatment of rheumatoid arthritis, though the problems are completely unrelated to Pfizer's abrocitinib for eczema.

As for Dupixent, it has the first-to-market advantage -- and that may be a winning edge. If doctors and patients are satisfied, they likely will choose to stick with the treatment, and newer rivals will have difficulty unseating the drug.

At the moment, Sanofi is a company in transition. Turning away from the indications once central to its identity, the drugmaker is now moving forward in a new direction. Dupixent is only part of the picture. Sanofi is also growing in the immuno-oncology field, and sales are gaining in vaccines and rare diseases, for example.

From a valuation perspective, Sanofi looks expensive compared to its peers in the eczema field. It's trading at 26 times earnings, compared to Lilly and Pfizer, which trade at 16 and 13, respectively.

But the Sanofi transition story is compelling, and it's hard to believe the shares won't move higher from here. Wall Street's one-year price target calls for 7.8% upside, but Sanofi might be worth holding onto for much longer. Even if Dupixent doesn't take half of the eczema market, it seems likely it will hold a large enough chunk to make a positive difference for the company and investors.