Please ensure Javascript is enabled for purposes of website accessibility
Log In Help Join The Motley Fool
Free Article Join Over 1 Million Premium Members And Get More In-Depth Stock Guidance and Research
By BYRON YEE - Feb 14, 2020 at 7:35AM

From now on, the world's largest asset manager will take companies' environmental impacts strongly into account when deciding if they belong in its portfolios.

For years, BlackRock (BLK 2.16%) CEO Larry Fink has used his annual letter to CEOs to tout the importance of social progress and challenge shortsighted businesses and governments that just focus on profitability. This year's letter made waves because he's finally putting his money where his mouth is by introducing some concrete steps in response to climate change.

In sum, Fink's letter said that climate change creates direct financial risks and that portfolios need to be adjusted to account for them. This is obviously a big job to tackle. However, if some of these steps are fully embraced and enforced, they have the potential for tremendous social and environmental impact. 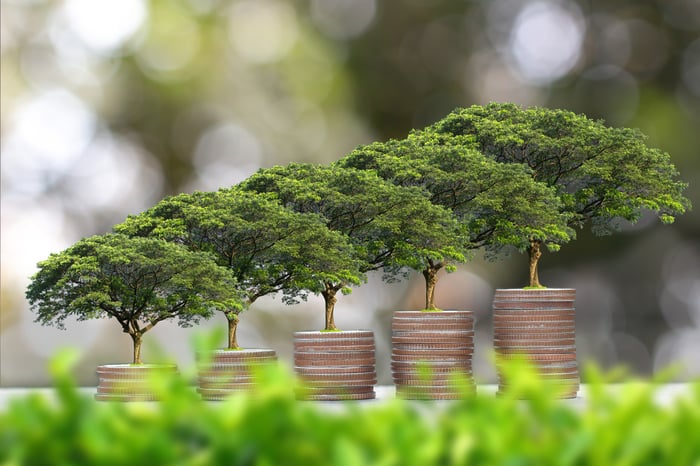 Impacts on financial reporting and disclosures

BlackRock wants companies to more clearly disclose how their operations affect not only their bottom lines, but also the environment. This is a challenging request and would require government support for it to happen.

In the meantime, the Sustainability Accounting Standards Board (SASB) has established guidelines for addressing long-term environmental concerns and also requires companies to report statistics, such as the amount of energy and water they consume, their emissions, and the use of certain chemicals and materials. In a similar effort, the Task Force on Climate Disclosures (TFCD), of which BlackRock was a founding member, is lobbying to have more climate-related information required in corporate reporting.

Fink also called for adding Environmental and Social Governance (ESG) impacts into financial reporting and analysis. Basically, investors need real data to accurately gauge the state of businesses' ESG activities and their financial implications. The CFA Institute suggests companies should provide hard numbers on a range of metrics, such as the carbon footprint of their operations, the number of jobs they've created, the net increase in the number of women and minorities they employ, how many employees have been trained, etc.

With that quantifiable data in hand, investors like BlackRock can then make financial decisions. For example, the asset manager targets certain rates of return for the companies it holds in its portfolios -- but those targets could be adjusted upward for companies that have issues with pollution (minus 10 points from Slytherin) or downward for those installing solar energy systems (5 points for Gryffindor).

Getting out of the coal industry -- sort of

One of BlackRock's key commitments is to remove from its portfolios any public companies that generate more than 25% of their revenues from thermal coal production -- the type that's burned to generate electricity. Why 25%? Why not less than 10% or even less than 1%? When asked that question in an interview with NPR, Fink responded: "Coal is -- it represents a small component of the investable universe. I think the other things that we announce ... creating more products, more indexes that have sustainability as a key characteristic ... is going to be a lot more important."

That didn't really answer the question.

While this policy shift is a good step forward, BlackRock shareholders need to be aware that they aren't investing in a coal-free portfolio. Analysts pointed out that coking coal (which is used to make steel) is excluded from this restriction, so companies like BHP (BHP 3.81%) and Teck Resources (TECK 2.42%) may have escaped the chopping block. The coal companies that will most likely get cut include Whitehaven Coal (WHC), Exxaro Resources (OTC: EXXAY), China Shenhua Energy (CSUAY 0.90%), China Coal Energy (CCOZY), and Yanzhou Coal Mining (OTC: YZCAY).

BlackRock currently holds stakes of between 1% and 3% in each of these companies, with a total estimated value of over $260 million -- which isn't a huge chunk of change for BlackRock. Further, national governments generally own large stakes in them, so the direct financial impacts to the companies from BlackRock's divestitures should be fairly minor.

In an indirect response to Fink's letter, Bank of America CEO Brian Moynihan argued that financial institutions should invest, rather than divest, in gas and oil companies in order to provide funding for -- and therefore progress more quickly toward -- more sustainable solutions. Most energy companies now brag about their ESG-related efforts and sustainable-energy research in their annual reports. However, whether these actions are being taken merely for greenwashing purposes or out of true business concern is tough to gauge.

How this will impact BlackRock's bottom line

German environmental and human rights nonprofit Urgewald estimates that BlackRock has over $17 billion in investments in coal plant developers, but that amounts to just 0.24% of its current $6.84 trillion assets under management (AUM). A broader-scale study conducted in August 2019 by the Institute for Energy Economics and Financial Analysis (IEEFA) reported that a collection of BlackRock's key fossil-fuel-intensive stocks cost it an estimated $90 billion over the past decade. The calculation was based on the stocks in question either dropping in price (value destruction) or underperforming the broader market (the opportunity cost of holding them rather than putting those funds into more rewarding assets).

At the date of this case study, these stocks accounted for approximately $83 billion of BlackRock's AUM -- about 1.27%. Assuming that money can be reallocated into positions in companies that both offer higher rates of return and don't excessively contribute to climate change, that seems like an obvious win-win for the asset manager.

BlackRock's price-to-earnings (P/E) ratio and price-to-sales (P/S) ratio have been consistently higher than those of Goldman Sachs and JPMorgan Chase, so this doesn't seem like a great value-investor's stock at this time. However, it's one to watch closely as the company continues to execute some of these plans over the next six to 12 months.

CEOs of large, influential companies certainly know how to talk the talk. However, numbers show that BlackRock has large exposure to and still heavily invests in fossil-fuel-related companies. This may be partially due to the fact that 6 out of its 18 board members have career ties to the fossil-fuel industry.

The IEEFA report pointed out that a measly 0.8% of BlackRock's AUM is invested in ESG-oriented funds. In addition, the Asset Owners Disclosure Project (AODP), which rates financial institutions based on governance, the amount of carbon risk in their portfolios, and financial figures ranked BlackRock 16th out of 48 and gave it a "C" grade in its 2017 Global Climate Index for Asset Managers. So the company obviously has room for improvement.

Fink wants BlackRock and all the companies in which it invests to have financial reports in line with standards created by the SASB and TCFD. That would be great for investors, but making it happen would require intervention from regulators.

He concluded his letter by saying the company is creating sustainable versions of its popular investment funds. This is an important step if BlackRock wants to tap into an ESG investing market worth upwards of $30 trillion. However, if the company truly wants to show meaningful leadership in sustainable progress, it must start walking the walk.