Please ensure Javascript is enabled for purposes of website accessibility
Log In Help Join The Motley Fool
Free Article Join Over 1 Million Premium Members And Get More In-Depth Stock Guidance and Research
By Daniel Sparks - Feb 15, 2020 at 8:31AM

Should you consider buying shares, too?

The Oracle of Omaha's moves in and out of stocks are followed closely by investors -- and for good reason: Under Warren Buffett's leadership, Berkshire Hathaway (BRK.B 2.02%)(BRK.A 1.75%) stock has compounded at an average annual rate nearly twice the rate of the S&P 500 (including dividends) since 1965. That's why it's not surprising that shares of Kroger (KR 3.21%) jumped more than 6% in after-hours trading on Friday, when Berkshire Hathaway revealed a stake in the company.

While it's always easier to see why Buffett might like a stock after Berkshire reveals a position in it, Kroger does look like a stock in which the famed investor would be interested. Indeed, I've argued the stock is a buy several times over the last 12 months. Shares trade at a conservative valuation even as same-store sales growth looks poised to accelerate for a second year in a row. Further, management has been a good steward of capital, paying a steadily increasing dividend and initiating an aggressive share repurchase program. (Sounds a bit like Apple, Berkshire's largest holding.) 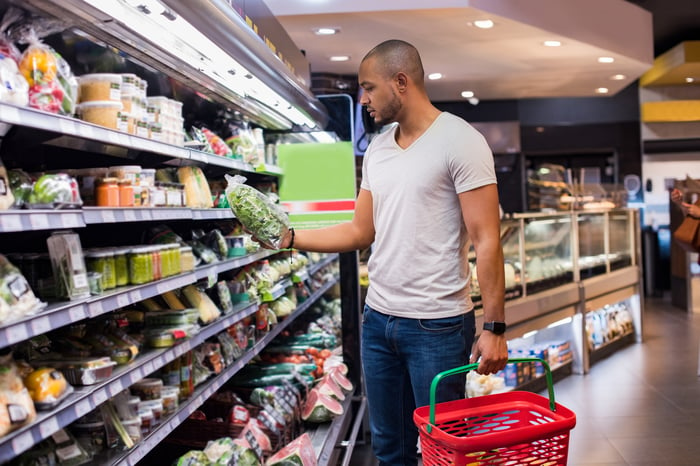 Buffett's Berkshire Hathaway bought 18.94 million shares of Kroger during Q4, the company revealed in a 13F filing. As of the grocer stock's closing price on Friday, this amounts to a $535 million position. Further, this puts Berkshire's stake in the company at about 2.4%.

It's worth noting that this could very well be a position initiated by one of Buffett's investment lieutenants -- Todd Combs or Ted Weschler, each of whom oversees about $14 billion. Buffett has said that some of the smaller purchases of securities are his lieutenants' moves. The Oracle of Omaha manages the company's elephant gun and is often on the hunt for much larger stakes.

That said, even if the purchase was made by one of Buffett's lieutenants, it doesn't mean Buffett himself won't follow with his own purchases. Indeed, shares of Apple were purchased by one of his lieutenants before Buffett himself looked more closely at the stock and proceeded to start buying en masse. Today, Berkshire owns nearly $80 billion worth of Apple stock and has more than a 5% stake in the company.

A growing business at a good price

2019 was a transformative year for Kroger. Though the stock finished the year just 5% higher than it started it, shares did notably recover from a sharp decline in the first half of 2019. Sentiment toward the stock improved as the company's "Restock Kroger" initiative to reposition itself in an evolving retail landscape started paying off in meaningful same-store sales growth.

Meanwhile, the company pays a 2.2% dividend yield and plans to repurchase between $500 million and $1 billion worth of shares in fiscal 2020.

Despite this solid performance, a meaningful dividend yield, and a robust share repurchase program, Kroger shares traded at just 14.4 times earnings as of market close on Friday.

No wonder Buffett -- or one of his lieutenants -- likes the stock.