Please ensure Javascript is enabled for purposes of website accessibility
Log In Help Join The Motley Fool
Free Article Join Over 1 Million Premium Members And Get More In-Depth Stock Guidance and Research
By Keith Speights – Feb 16, 2020 at 9:03AM

This Canadian marijuana stock has built fortunes for some early investors.

You know Aphria and Aurora Cannabis, Canopy Growth and Tilray, but do you recall the best-performing marijuana stock of them all? It's none other than Cronos Group (CRON -5.18%), the pot stock that's had a very shiny surge over the last few years.

It might be hard to believe that Cronos Group is the biggest all-time winner among Canadian marijuana stocks, especially in view of the last 12 months. Cronos has lost nearly two-thirds of its market cap since February 2019. Even with this steep decline, though, Cronos has outperformed all of its rivals over the long run.

How much money would you have if you had invested $1,000 in Cronos at its initial public offering (IPO) and held onto all of your shares? Brace yourself for the staggering sum. 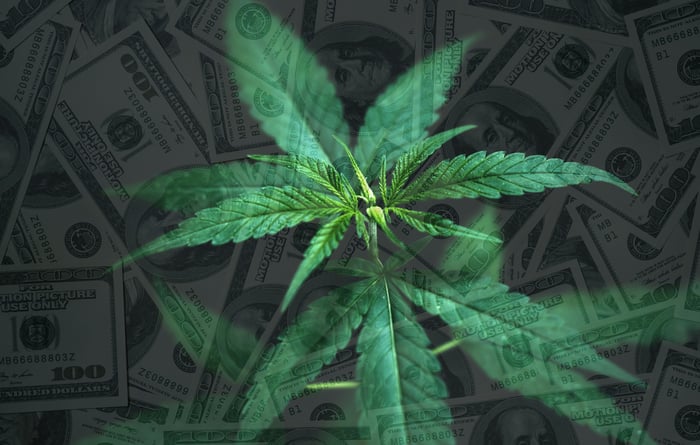 Before we get to the amount of money you'd have after buying Cronos stock, it's first important to note that the Canadian cannabis producer has had two different initial listings on major stock exchanges. U.S. investors will probably be more familiar with Cronos' listing on the Nasdaq stock exchange in February 2018. However, Cronos stock was available for trading before then in Canada.

In July 2014, PharmaCan conducted an IPO on the TSX Venture Exchange with an initial share price of 0.10 in Canadian dollars, which at the time was roughly US$0.093 per share. PharmaCan changed its name to Cronos Group in October 2016.

If you had bought $1,000 worth of shares of what would later become Cronos Group at its 2014 IPO price, you would have been able to scoop up 10,752 shares. Let's assume that you kept all of those shares through the years. If you did, your initial investment would now be worth (drumroll, please)... $78,920.

Legendary investor Peter Lynch used to get excited talking about 10-baggers, a reference to stocks that multiplied an initial investment tenfold. Cronos is more than a near-79-bagger.

Turning $1,000 into nearly $79,000 is a massive achievement. But what if you had bought Cronos stock at its IPO but decided to sell the stock shortly after tobacco giant Altria announced that it was buying 45% of the company for $1.8 billion? Make sure you're sitting down.

All of that sounds great. But let's play another what-if game. Suppose you missed out on Cronos' initial Canadian IPO (as nearly every investor did) but opted to buy the stock when it first listed on the Nasdaq? How much money would you have in your coffers? The story isn't so great.

Instead of a huge five-figure or six-figure gain, you'd be sitting on a loss if you bought Cronos on its Nasdaq debut. The stock is down close to 4% since then. The moral of the story? Timing is everything, at least when it comes to investing in marijuana stocks.

A more relevant question than how much money you could have made investing in Cronos Group is how much money you might make by buying the stock now. I suspect your future fortunes (or lack thereof) hinges on your timing in this case, too. However, by timing, I'm not referring to when you buy but instead how long you plan on holding shares of Cronos.

My best guess is that Cronos and many other Canadian marijuana stocks could rebound in 2020. The industry dynamics are improving with the launch of the Cannabis 2.0 cannabis derivatives market in Canada and with Ontario issuing more licenses for new retail cannabis stores. Cronos could also benefit from growth in the U.S. hemp CBD market this year.

Am I predicting that Cronos Group stock will soar in 2020? No. It might, but the company also faces significant challenges -- especially the fact that it's still losing a boatload of money every quarter.

However, over the long term (and I'm talking about at five years or more), the global cannabis market will expand significantly. Cronos' relationship with Altria gives it staying power that most of its peers don't have. I don't expect that $1,000 invested in Cronos today will turn into close to $79,000 within the next few years. But I do think the stock could deliver solid returns for patient investors willing to endure a lot of volatility.