Despite poor performances in recent years, here's why Gilead Sciences could turn things around.

With a market cap of about $83 billion, Gilead Sciences (GILD -0.76%) is one of the largest biotech companies in the world. However, big doesn't mean buy, and there are several reasons why investors should think twice before investing in Gilead Sciences. First, the company's stock is currently hovering near its five-year low and is down by 33.7% over that period. Second, though Gilead Sciences' shares seem attractively valued with a forward price-to-earnings (PE) ratio of 10.61, the company's stock looks expensive when considering future earnings. Gilead Sciences' price-to-earnings growth (PEG) ratio is currently 7.62.

Third, Gilead Sciences' Chronic Hepatitis C Virus (HCV) product sales continue to decline. During the fourth quarter, the company's HCV sales were $630 million, compared to $738 million recorded during the prior-year quarter. For the full fiscal year 2019, HCV sales were $2.9 billion, a decrease of about 22% compared to the previous fiscal year. Despite all these issues, there are several reasons to remain somewhat optimistic about Gilead Sciences' future and keep a close eye on the company; here are two such reasons. 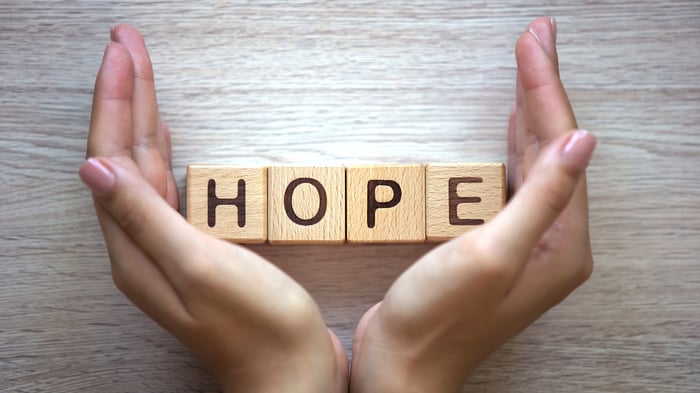 Gilead Sciences' HIV lineup continues to perform well. During the fourth quarter, sales of the company's HIV products were $4.6 billion, a 12% year-over-year increase. For the full year, Gilead Sciences' HIV product sales were $16.4 billion, 12.3% higher than the year-ago period. This growth was driven primarily by HIV treatment drug Biktarvy. During the fourth quarter, sales of Biktarvy were $1.6 billion, a whopping 171.6% increase compared to the prior-year quarter. And for the full year, Biktarvy's sales topped at $4.7 billion, compared to $1.2 billion during 2018.

During Gilead Sciences' fourth-quarter earnings conference call, CEO Daniel O'Day said, "Today in U.S., approximately one in two patients who are new to therapy and patients who are switching therapy are initiating on Biktarvy." O'Day expects that trend to continue in 2020 and beyond.

Gilead Sciences can also count on Descovy moving forward. Sales of this HIV treatment drug have not been stellar of late. During the fiscal year 2019, Descovy recorded $1.5 billion in sales, compared to $1.6 billion in 2018. However, the U.S. Food and Drug Administration (FDA) approved Descovy for the prevention of HIV in October 2019, and the drug's sales should pick up once again. In short, Gilead Sciences' HIV lineup still has room to grow.

Gilead Sciences has more than two dozen products in its pipeline, but two of these products that recently hit the FDA's desk deserve mention. First, there's filgotinib -- a potential treatment for rheumatoid arthritis (RA) -- which the company submitted to the FDA for review in December. Gilead Sciences expects an answer from the health regulator sometime this year. It is worth noting that Gilead Sciences also submitted filgotinib for review (still for the treatment of RA) to the relevant regulatory authorities in Japan and Europe. The company should be able to launch filgotinib in these markets sometime this year if it is approved.

Second, Kite Pharma -- a subsidiary of Gilead Sciences -- recently announced that the FDA had accepted its application for KTE-X19, a potential treatment for mantle cell lymphoma (MCL). KTE-X19 was granted priority review, which means the review process for this drug will be faster than normal. The company expects a decision from the health regulator by Aug. 10.

Gilead Sciences may not have performed well of late, but the company's current HIV lineup -- as well as several of its pipeline candidates -- could keep its revenue and earnings afloat. Investors should also remember that Gilead Sciences entered into a partnership with Galapagos (GLPG -1.51%) last year. Per the agreement between the two biotech companies, Galapagos received an upfront payment of $3.95 billion and a $1.1 billion equity investment from Gilead Sciences.