Please ensure Javascript is enabled for purposes of website accessibility
Log In Help Join The Motley Fool
Free Article Join Over 1 Million Premium Members And Get More In-Depth Stock Guidance and Research
By Anders Bylund - Feb 18, 2020 at 8:21AM

The provider of systems monitoring services swung to a profit in the fourth quarter.

Datadog's fourth-quarter results by the numbers

The reported results compared favorably to Datadog's official guidance, which called for an adjusted net loss of roughly $0.02 per share on top-line sales near $102 million.

The company closed the fourth quarter with 858 customers, whose annualized revenue run rates added up to at least $100,000. That's up from 727 large customers in the third quarter and 453 accounts in the year-ago period. New customers accounted for roughly 40% of Datadog's full-year revenue growth. Larger contracts with existing clients explained the rest of that top-line expansion. By the end of the fourth quarter, approximately 60% of Datadog's clients had bundled two or more of the company's cloud-based monitoring services.

Building the future, one monitoring service at a time

Datadog launched several new monitoring systems in 2019, including new tools for network monitoring hitting the market in the third quarter followed by security analytics in November. These launches were a part of a broader vision, where Datadog's management hopes to expand its operations into new target markets.

"We envision a future where silos continue to break down beyond [development] and [operations] and extended security teams," said CEO Olivier Pomel in the fourth-quarter earnings call. "We believe we have a very significant opportunity to further expand our product portfolio and increase our wallet share with customers. We are a product-driven company and investing in innovation is a core part of our business strategy." 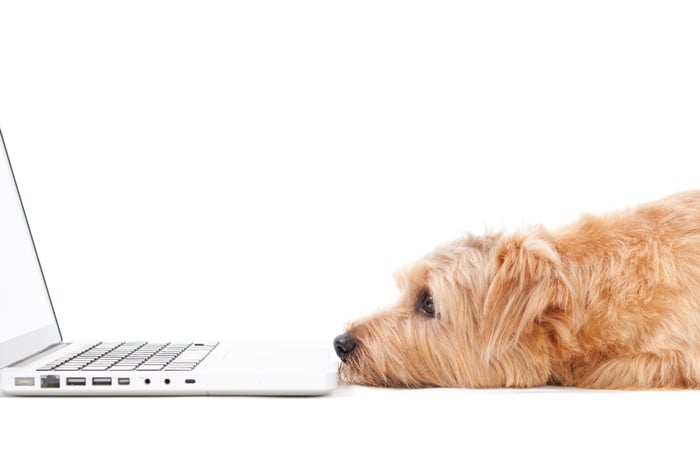 What's next for Datadog?

Looking ahead, Datadog expects first-quarter revenue to rise by roughly 69% year over year, landing near $118 million. The company should post an adjusted net loss of $0.02 per share. Your average analyst had been expecting a larger loss and lower revenue. Management also sketched out Street-stumping full-year guidance targets, including a net loss in the neighborhood of $0.05 per share and revenue near $540 million.

Datadog's stock fell 3% on the news despite a strong report and bullish analyst responses. That's life in the fast lane sometimes. As a high-octane growth stock in the red-hot cloud computing sector, Datadog is sometimes held to a higher standard than other stocks. It's not always enough to beat analyst estimates -- sometimes the surprise had to be even larger in order to support the company's skyrocketing valuation.