Please ensure Javascript is enabled for purposes of website accessibility
Log In Help Join The Motley Fool
Free Article Join Over 1 Million Premium Members And Get More In-Depth Stock Guidance and Research
By Lou Whiteman – Feb 18, 2020 at 11:31AM

The bank intends to cut back in Europe and North America while investing in Asia and the Middle East.

Banking giant HSBC Holdings (HSBC -3.98%) announced a sweeping overhaul on Tuesday, including shedding about 15% of its global workforce, as it works to recover from an onslaught of challenges, including Brexit, U.S./China trade tensions, and, more recently, uncertainties due to the coronavirus.

HSBC, which is based in London but does significant business in Asia, said it would eliminate at least 35,000 jobs over the next three years and take $7.3 billion in restructuring charges as part of a planned revamp that will target $4.5 billion in cost reductions in the U.S. and Europe. 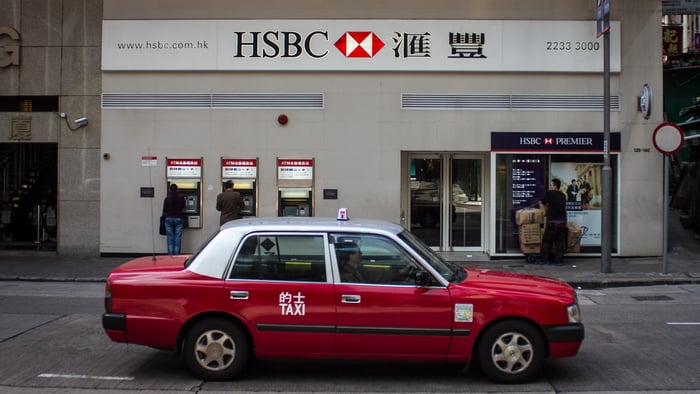 "Parts of our business are not delivering acceptable returns," interim CEO Noel Quinn said in a statement. "We are therefore outlining a revised plan to increase returns for investors, create the capacity for future investment, and build a platform for sustainable growth."

HSBC said it intends to scale back its U.S. trading operations and reduce its retail branch network by about 30%, refocusing its U.S. and European businesses around international investment banking opportunities. At the same time HSBC intends to accelerate its investments in Asia, where HSBC currently generates most of its profits.

The restructuring announcement came as HSBC announced 2019 net profit fell 53% year over year to $6 billion, impacted by the $7.3 billion charge. The bank said it was monitoring the economic disruption caused by the coronavirus, which HSBC said "may impact" 2020 performance.

HSBC has also been impacted in recent years by uncertainty created by Brexit, as well as U.S./China trade tensions.

Quinn has been serving as interim CEO since last August, taking over after John Flint was removed after just 18 months on the job. HSBC offered no update on the search for a full-time replacement for Flint, or whether Quinn was still being considered for the job, saying only that we expect to make an appointment within the 6 to 12 months initially outlined."