Shares of the Ironman parent jumped on news of a potential sale.

Shares of Wanda Sports Group (WSG) were surging today on a report from Bloomberg that the sports event operator was considering selling the Ironman brand. 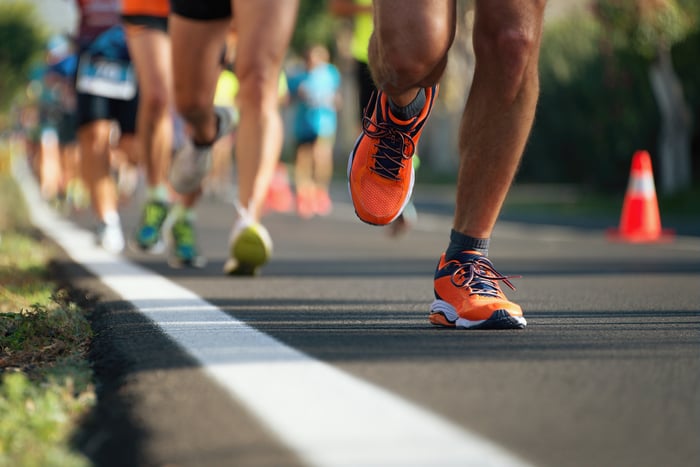 Wanda is a Chinese company that owns and runs events including the Rock 'n' Roll Marathon and holds media rights for events like the FIFA World Cup. It acquired Ironman, known for its ultra triathalons, in 2015, but is now exploring a sale. The company has hired an adviser and has met with private equity firms to discuss a sale.

Wanda is aiming to sell the Ironman business for $1 billion, more than the company's market cap of around $400 million prior to today's jump. It also has $927 million in debt, giving it an enterprise value of more than $1.3 billion before today's news broke.

The company was approached last year by the Professional Triathletes Organisation (PTO) about a potential sale, arguing that excessive debt was preventing Wanda from investing in the Ironman. The PTO renewed its offer on Feb. 4, proposing an all-cash deal, according to Bloomberg.

Considering Wanda's debt burden, proceeds from a sale will likely be used to pay down debt.

The report noted that Wanda may still choose not to sell the Ironman business, but it's clear that investors like the idea. The stock was trading down by about 62% from its IPO last July before today's jump, but considering the growth of such events as well as the popularity of sports media, Wanda could be positioned for a comeback if the deal goes through.