Please ensure Javascript is enabled for purposes of website accessibility
Log In Help Join The Motley Fool
Free Article Join Over 1 Million Premium Members And Get More In-Depth Stock Guidance and Research
By Lee Samaha - Feb 19, 2020 at 7:35AM

This stock offers an intriguing mix to investors.

Switzerland's ABB (ABB -0.85%) is one of the most interesting stocks in the industrial sector, not least because its shareholder base must be a smorgasbord of investors. If you got them in one room, you'd be looking at a motley collection including dividend hunters, value stock enthusiasts, and growth disciples. Let's look at why there's something for everyone with ABB.

A generous and growing dividend

Starting with the easiest part to understand, the company's current dividend yield on its NYSE-listed stock is around 3.2%. It's an attractive yield, and the company's policy is to "to pay a rising, sustainable dividend over time," according to its earnings releases. The question isn't whether ABB's divided is attractive or not (it obviously is), but whether it's sustainable and can grow. Provided the company's plans for earnings growth remain on track, the answer is a resounding yes. 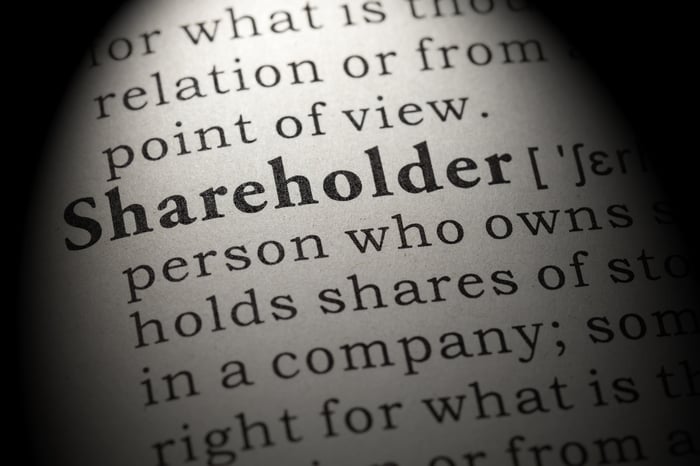 The following table helps explain matters. If you are focusing on ABB's free cash flow (FCF) to dividend coverage, then you might be concerned. As you can see below, its FCF (the money left over to repay debt, pay dividends, and buy back shares) doesn't cover its dividend.

On the other hand, ABB is in the middle of a major restructuring that is eating away at its earnings and cash flow in the near term. You can see this in the difference between its reported net income, and what the company calls its "operational net income". For reference, the latter takes out the impact of acquisitions, disposals, restructuring costs and other items.

As you can see above,  ABB's operational net income was actually $2.65 billion in 2019, and if that converts to FCF at same rate as reported net income did to FCF in 2019 ($1.439 billion to $1.495 billion), then ABB's FCF would be closer to $2.750 billion -- meaning roughly 64% of FCF was being paid in dividends. That's probably toward the high end of what most companies would be happy with, but if ABB can grow earnings in line with expectations, that means it should be able to increase the dividend in the future.

One school of value investors likes to compare companies across an industry and try to buy the ones with the potential to raise their margin toward industry averages. This approach comes with the caveat that management must be committed to doing so. Both of these considerations apply to ABB.

As you can see below, ABB's EBITDA margin is nowhere near a basket of its peers. 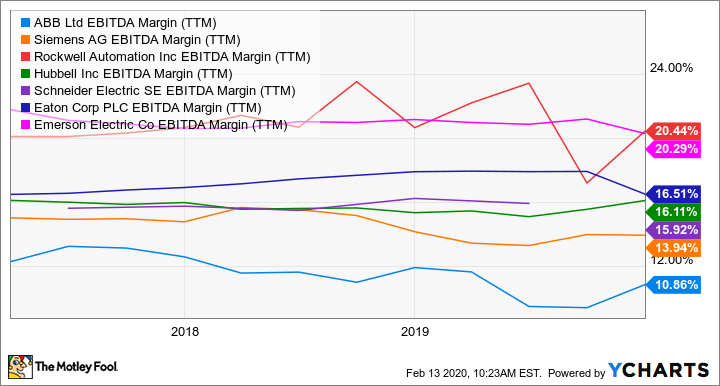 In fact, the comparison gets worse when you look at the granular details. For example, ABB's industrial automation segment (24% of operational earnings before interest, taxation, and amortization, or EBITA, in 2019) generated an EBITA margin of 11.7% in 2019, compared with Siemens' digital industries segment, which generated a 17.9% adjusted EBITA margin in 2019. Similarly, ABB's industrial automation margin is nowhere near that of Rockwell Automation's.

It's a similar story with ABB's electrification segment (13.3% EBITA margin in 2019), which trails the near-20% margin generated by Eaton's electrical segments in 2019.

The table below shows the opportunity for margin expansion across ABB's segments, with only the motion segment currently within management's medium-term target range.

ABB has an earnings growth opportunity thanks to the restructuring plans intended to cut its annual costs by some $500 million by 2021. Consider as well the sale of ABB's power grids business, its investment in digital technologies, pivoting toward digital solutions, and long-term growth from its robotics and discrete automation segment.

Even though 2020 will be a very difficult year for robotics (not least because the automotive industry is facing production declines this year), management sees the segment growing in the mid single digits over the medium term, with its other three segments expanding at a low single-digit rate. For growth investors, ABB is shifting toward a higher long-term growth rate.

Something for all investors

All told, it seems there's something for everyone with ABB, but it's fair to say that the company needs to deliver on growth and margin expansion in order to justify buying its stock. The dividend can only grow if earnings grow, and once the cost-cutting and operational improvements are done, then ABB will need top-line growth. Progress so far in 2020 has been positive, and ABB is starting to look like an attractive stock on the whole.

Why This Hidden EV Stock Is a Smart Buy