Please ensure Javascript is enabled for purposes of website accessibility
Log In Help Join The Motley Fool
Free Article Join Over 1 Million Premium Members And Get More In-Depth Stock Guidance and Research
By Rhian Hunt - Feb 19, 2020 at 7:27AM

The continued spread of African Swine Fever Virus (ASFV or "pig Ebola") hit the international segment of Hormel Foods Corporation (HRL 0.28%) hard, sending sector profits into a tailspin during Q4 2019. While competitors like Tyson Foods, Inc. (TSN 0.85%) raked in profits from surging meat exports to China, Hormel's famous Spam processed meat products stumbled as the disease continued to hammer porker production across Asia. But as gains elsewhere help to counterbalance the losses, Hormel might emerge stronger than before if it plays its cards right.

One company's windfall is another's misfortune

The effects of pig Ebola and resulting drastic drop in pork supply continue to slam Chinese consumers with strong food price inflation. China is the world's largest market for pork -- a national staple -- and other types of meat. The virus's inroads into Chinese pig herds drove pork prices up approximately 70% year over year by October 2019. Prices didn't stabilize, though, and by mid-February 2020, pork cost 116% more than in February 2019.

On this surface, this looks like a jackpot opportunity for US-based meat producers, drawing on herds that remain uninfected thus far. For some of them, it is. Tyson got the green light from both the American and Chinese governments back in December 2019 to start shipping its USA-produced poultry to China. Given the huge shortage of meat, the Chinese increased not only pork orders, but allowed other types of meat imports in an effort to bridge the shortfall. According to CEO Noel White during the Tyson Q1 2020 earnings call on Feb. 6, quarterly pork orders to China skyrocketed by 600%. 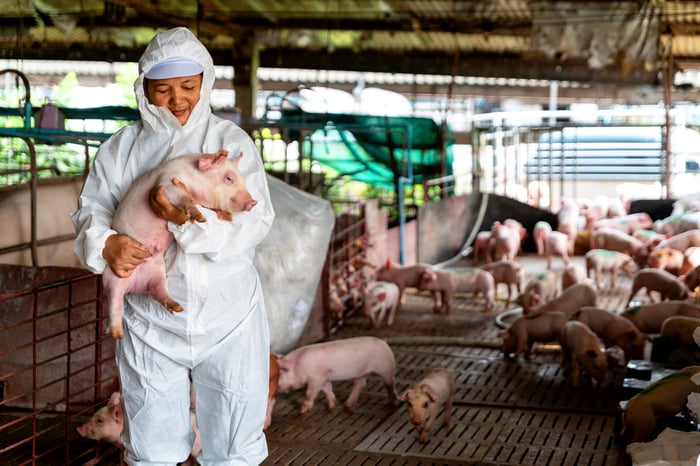 While pig Ebola is serving up a feast of profits to Tyson, the same factor is forcing Hormel's international segment to tighten its belt. Tyson produces meat in the USA and exports it to China, but Hormel spearheaded local production in China in 1994. It built meat processing plants there in 1997 to 1998, producing both Spam and other American type products plus the processed, refrigerated pork familiar to Chinese consumers. With local inputs feeding its Chinese plants, Hormel's supply chain has been directly affected by pig Ebola in a way Tyson's 36 American plants haven't.

Compounding the problem, Hormel's characteristic products in the China market, refrigerated pork and spam, can't use substitute meats. Spam is a pork product and cannot be made from chicken. For this reason, ASFV will likely continue causing disruptions to Hormel's international segment until either the disease abates and herds recover, or the company completely reconfigures its supply chain.

Porkers reel, but gobblers come to the rescue

Pig Ebola's impact on the company's bottom line would have been stronger except for a notable change of fortune for its Jennie-O Turkey Store brand, along with decent performance in its other sectors. The turkey brand, which controls 34% of all ground turkey sales on the market, faltered after 2018 salmonella recalls.

Hormel took positive action in 2019, reversing the slide of Jennie-O through reorganization and aggressive advertising. The effects of turkey oversupply and the salmonella recalls appear in the 0.5% net sales decline from 2018 to 2019. But at the end of the year, as Hormel's initiatives took hold, Jennie-O's net sales gained 2.6% compared to Q4 2018. The approximate $10.2 million year-over-year sales growth for the fiscal year's last quarter effectively halves the $20.5 million impact of Chinese pork losses. Hormel's refrigerated food sector also improved net sales by 3.9% year over year.

Hormel can likely weather the storm

While the turkey salmonella recalls of 2018 and 2019's pig Ebola troubles both hurt Hormel's bottom line, the company still has several important factors working in its favor. Fools investing in food stocks should take note of Hormel's seemingly effective efforts to change Jennie-O turkeys from negative territory back to profitability in less than 12 months.

The company's total debt of $250 million stands at less than half of is $672 million cash, putting it in a robust position for expanding operations, acquiring new brands, or restructuring its international segment for greater profitability in 2020. ASFV should eventually fizzle, easing Hormel's Chinese supply chain pressures. A good cash position, demonstrated success at rapidly flipping a major brand from loss back to profit, and strong demand for meat all appear to give Hormel good growth potential in 2020 or 2021.