Please ensure Javascript is enabled for purposes of website accessibility
Log In Help Join The Motley Fool
Free Article Join Over 1 Million Premium Members And Get More In-Depth Stock Guidance and Research
By Prosper Junior Bakiny – Feb 19, 2020 at 10:40AM

Keytruda will continue to be a growth driver for Merck, but the company is looking elsewhere for growth as well.

Given these metrics, Merck doesn't seem like a screaming buy, but there's much more to the company than its performance over the past five years and its PEG ratio. With that in mind, let's dig a little deeper and find out whether it's worth buying shares of this pharma giant today.

The single best argument for why you should buy shares of Merck is none other than Keytruda. This drug is approved for a long list of cancers, including head and neck cancer, lung cancer, melanoma, and lymphoma. Keytruda continues to generate growing sales. During the fourth quarter, sales of the blockbuster cancer drug were $3.1 billion, a 45% increase year over year. 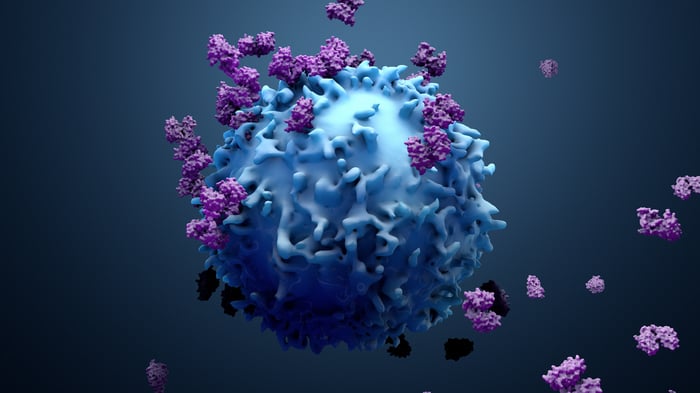 For the full fiscal year 2019, Keytruda delivered sales of about $11 billion, 55% higher than the previous fiscal year. Further, Keytruda recently landed an important approval in China. The country's regulatory authority gave the drug the green light for the treatment of non-small cell lung cancer, the leading cause of cancer death in China. There are approximately 631,000 deaths associated with lung cancer every year in China, which makes an exciting market for Merck's crown jewel.

Keytruda will likely land more approvals in the future, and sales of the cancer drug should continue growing at a nice clip.

Merck recently announced it would spin off its women's health, legacy brands, and biosimilars segments into a stand-alone business dubbed NewCo; the spin-off should be completed by the first quarter of 2021. The goal for Merck is to focus on its oncology, vaccines, hospital, and animal health segments. This move will have clear benefits for Merck, at least according to CEO Kenneth Frazier:

The separation of NewCo will help us in our aspiration to be the premier research-intensive biopharmaceutical company by allowing us to focus on innovations that prevent and treat diseases. And over the past few years, we have seen how more focus and more prioritization leads to more growth, more efficiency and more value creation.

Despite these advantages, there's one problem with Merck's strategy: The company may become even more dependent on Keytruda after it successfully spins off these segments. Merck is aware of its potential ultra-dependence on Keytruda, and the pharma giant is looking for ways to diversify its lineup. In January, the company entered into a "strategic oncology collaboration" with Taiho Pharmaceuticals and Astex Pharmaceuticals.

Per the agreement, Taiho and Astex will grant Merck the rights to some of their pipeline candidates, while Merck will provide Taiho and Astex with an upfront payment of $50 million, with additional incentive payments of up to $2.5 billion depending on several factors. In addition to this partnership, Merck recently closed its acquisition of ArQule, a biopharmaceutical company that focuses on the development of treatments for cancer and rare diseases.

The purchase cost Merck about $2.7 billion in cash. ArQule's leading pipeline candidate is ARQ531, a potential treatment for B-cell malignancies that is currently in phase 2 testing. Merck believes this acquisition further strengthens its pipeline and could deliver lucrative oncology products in the future.

Sales of Keytruda will only keep growing, and Merck has several promising ways to boost its product lineup (including its recent acquisition of ArQule and its partnership with Taiho and Astex). Investors should also consider that Merck currently offers a dividend yield of 2.98%, and the company has raised its quarterly dividend payouts by about 30% over the past three years. For all of those reasons, I believe this pharma stock is worth buying.