The gene sequencing company's shares have been lagging. Will the situation be different a year from now?

The stock market is starting off 2020 with a bang, but investors in Illumina (ILMN -2.65%) haven't shared in those gains. Despite strong performances by companies in technology, biotech, and the healthcare sector as a whole, Illumina's shares are down 10% since the beginning of the year after the gene-sequencing leader reported better-than-expected results for the fourth quarter and announcing an innovative new line of sequencing systems.

Should Illumina investors expect more of the same lackluster performance in 2020? The market seems to think that the year ahead will be unspectacular for this leading healthcare company, but let's look at where the company will be 12 months from now, when investors and analysts will be looking ahead to 2021. 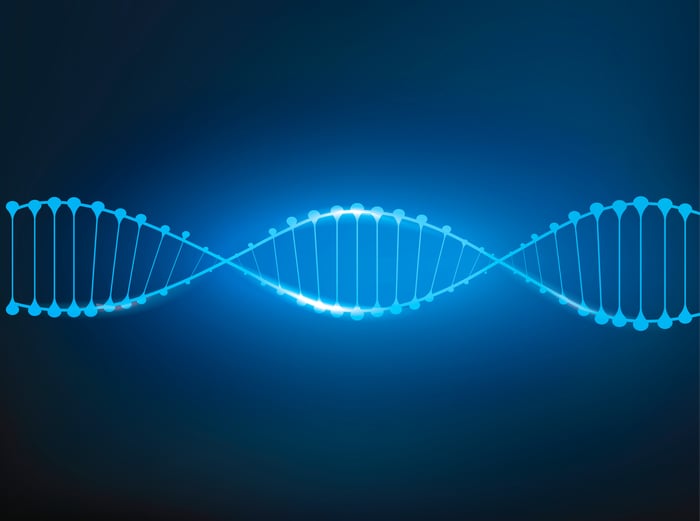 Sales of a new sequencing platform will be getting traction

Illumina uses the J.P. Morgan Healthcare Conference to make new product introductions, and this year the company rolled out a new line of mid-range sequencers that will enable customers to produce 2.5 times the output per run at half the cost compared with the company's current mid-range instrument. The new NextSeq 1000 and NextSeq 2000 sequencers use shorter light wavelengths and super-resolution optics to shrink the physical area required to extract a given amount of genomic information by a factor of 30.

Three years ago, when Illumina announced a new line of high-end sequencers, the stock popped on the news and kept marching up for a year and a half. This year, the market reaction has been different. The reason could be that the rollout will put a damper on system sales in the short term. Illumina expects a pause in system sales growth as customers hold off on buying older products while considering the newer models, which aren't available yet. The NextSeq 2000 will start shipping this quarter, but the consumables that allow the highest speeds and lowest operating costs won't be available until the fourth quarter. The lower-priced NextSeq 1000 won't be available until late in the year, either.

The market's not looking very far ahead. A year from now, these new products will be shipping in volume, giving a boost to system sales in 2021 as well as driving higher consumable revenue as customers make use of faster throughput and better usage economics. Instrument revenue in 2019 was down 6% from the year before, and the company expects a small increase in 2020, but early next year, investors should be anticipating larger gains from sequencing system sales in 2021.

Whereas instrument sales should be picking up steam a year from now, Illumina makes most of its money from selling the consumables that are used every time a customer uses those instruments. Those sales will continue to grow faster than the company's revenue overall as gene sequencing moves from the realm of research to clinical uses in diagnosis and treatment of disease.

Sequencing consumable revenue from clinical uses increased 20% in 2019 and revenue from oncology applications grew faster than that. Clinicians are using gene sequencing to aid in choosing optimal therapies and to screen for hereditary disposition for certain cancers. Revenue from non-invasive prenatal testing (NIPT) is also growing fast, especially in China and Europe.

Last year, revenue from all consumables accounted for 68% of the total, up from 65% the year before. The faster-growing clinical segment accounted for 40% of sequencing consumable shipments in 2019, and that proportion should be even higher a year from now.

Population studies are ramping up

One headwind that Illumina faced in 2019 was that some large-scale population studies ramped up more slowly than the company expected, but those customers will be creating a tailwind for Illumina by this time next year.

UK Biobank is now operating at scale, using Illumina's high-end NovaSeq instruments to sequence the genomes of 500,000 study participants by the summer of 2021. Genomics England announced last month that it's agreed to hire Illumina to sequence 300,000 genomes over the next five years, with an option to increase to 500,000.

Illumina has said that there are over 50 population studies that are getting underway globally, so as those transition out of the planning phase, Illumina's revenue from these large projects should accelerate.

Direct-to-consumer sequencing will continue to be a drag

One headwind from 2019 isn't going away: a steep decline in demand for direct-to-consumer (DTC) genetic services such as Ancestry and 23andMe. The boom in these services was a nice source of growth for Illumina in 2017 and 2018, but privacy concerns and the exhaustion of the pool of early adopters who were curious about genealogy have caused that revenue to plummet. The companies selling consumer genomic services are pivoting to more health-oriented offerings, but there won't be a full recovery anytime soon.

DTC revenue should continue to decline in 2020, but the good news for Illumina investors is that year-over-year comparisons will be getting easier a year from now, and this business accounts for a small part of the overall revenue picture anyway. Microarrays, the kind of instruments used for DTC services, made up only 13% of 2019 revenue, and about 60% of that is from healthier businesses in livestock testing and research.

Illumina's outlook will be brighter a year from now

The market's not too excited about projected earnings growth that significantly lags the company's long-term performance. But I think a year from now, the picture will be brighter, with investors looking ahead to growing sales of the new product line, a diminishing effect from declining consumer genetic services, and continued strength in the company's core growth areas.

Illumina's stock is rarely cheap, but shares are selling at a multiple of earnings that's near a two-year low based on the near-term outlook. Patient investors with a long-term perspective will likely find 2020 to be a good year to pick up shares.