Please ensure Javascript is enabled for purposes of website accessibility
Log In Help Join The Motley Fool
Free Article Join Over 1 Million Premium Members And Get More In-Depth Stock Guidance and Research
By Daniel B. Kline – Feb 20, 2020 at 11:42AM

The move would give consumers more choice.

Apple (AAPL 1.74%) has always been about pushing its own family of products. If you use an iPhone, for example, then the company's mail, music, and browser apps are defaults. You can use third-party apps, but they're generally harder to access than Apple's own family of apps. 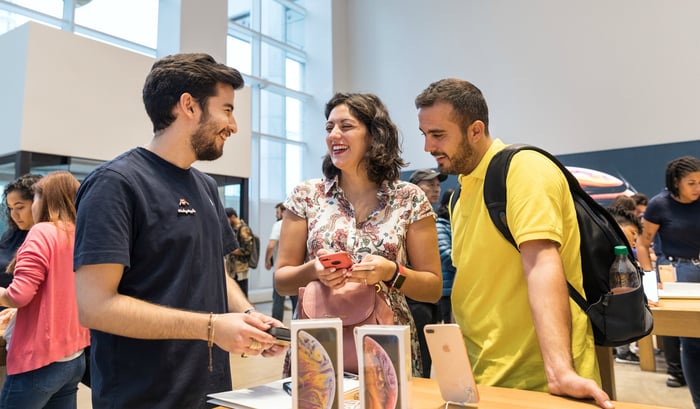 What is Apple considering?

The mail, music, and Safari browser buttons are hardwired into the iPhone. Users can change their position in the phone's fixed bottom navigation but you can't swap out the Apple services for ones offered by its rivals.

That's offputting to consumers who prefer to use rival services. It also brings attention to Apple from regulators who wonder if Apple might be giving itself too big of an advantage.

The company is also considering allowing third-party music players (like rival Spotify) on its devices including the Homepod. That could increase Apple's appeal among people loyal to services they could not previously access easily (or in a few cases, at all) on Apple's closed system.

Is this a smart move?

By allowing customers to set their own defaults Apple would be increasing customer satisfaction and opening up its products to users who previously chose not to use them. It would also deflect attention from regulators and probably at very little cost to the company since many users would simply leve the defaults at factory settings.