Blackstone Mortgage Trust (NYSE:BXMT) reported fourth-quarter and full-year earnings last week that came in above Wall Street expectations and help the company enter 2020 in a strong position for further growth.

Net earnings came in at $0.59 a share, while core earnings were $0.68 a share. The Street was looking earnings of $0.64 a share so the numbers handily beat expectations. On a year-over-year basis, earnings per share fell from $0.62 per share in the fourth quarter of 2018, however that was driven by an increased share count. Blackstone Mortgage did a secondary share offering during the year which increased shares outstanding. Funds from operations (FFO) were up 7.2%.

Overall, the office sector is performing well. Commercial Real Estate firm CBRE reported that office vacancy rates in the fourth quarter of 2019 were 12.1%, the lowest in 13 years. Asking rents are increasing at a 5.2% clip, which is the fastest since 2016. Finally, office job growth increased by 1.7% to a total of 460,000 jobs. For an office mortgage REIT, these are figures that support continued loan performance. 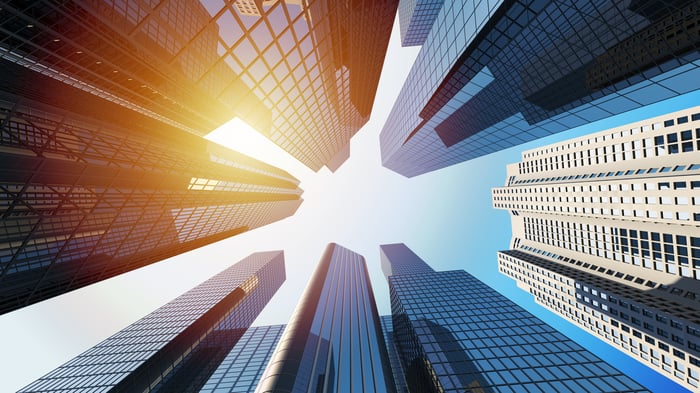 Blackstone operates a bit different from your typical office REIT

Blackstone Mortgage Trust is a little different from the more common office real estate investment trusts (REITs) like Boston Properties or SL Green. Those companies generally develop office space and earn rental income. Blackstone mortgage doesn't develop buildings; it loans money. The company largely invests in the senior debt of a building and is first in line to get paid, if the underlying owner is having financial difficulties. The company's $17.9 billion portfolio comprises senior notes collateralized by holdings that break down to 58% office properties, 18% hotels, 9% multifamily units, and 15% various other properties. Blackstone Mortgage has exposure primarily in the U.S.; however, it does invest in Australia, Continental Europe, Canada, and the United Kingdom.

At the end of the year, the portfolio consisted of $17.9 billion in loans, which pay a floating interest rate. What this means is the amount of interest Blackstone is paid rises and falls with the market. This makes the value of the portfolio largely insensitive to interest rate movements, which is a good thing for a leveraged financial company. If you include origination fees and other charges, the all-in yield of the portfolio works out to be about 5.21% at current levels of LIBOR. LIBOR stands for the London Interbank Offered Rate and it is a common reference point for floating-rate debt. These assets are financed with $12.8 billion of debt, primarily secured credit facilities. Blackstone Mortgage Trust doesn't detail how much it is paying on each facility. However, in 2019, interest income was nearly $883 million, and interest expense was more than $458 million.

The risk profile of a REIT like Blackstone is mainly limited to credit. The company does not have much interest rate risk because the loans it makes and its own borrowings are mainly floating rate, which means the rate rises and falls with the market. So if interest rates rise, the loans Blackstone makes pay more, and the cost of borrowing will rise in tandem. Conversely, in a falling interest rate environment, the portfolio yield will fall, as will borrowing costs. Unlike a typical mortgage REIT, Blackstone Mortgage Trust limits its leverage to about 400%, and the current debt-to-equity ratio is about 300%.

In the earnings presentation, Blackstone management discusses its exposure to interest rate movements, and it turns out that the portfolio will perform better if LIBOR changes. A 1% increase or decrease in LIBOR will increase earnings per share by $0.03 per quarter. (Note that eventually, LIBOR will be the Secured Overnight Financing Rate [SOFR], which is market-based and eliminates the ability of market makers to game the rate based on their exposure.)

A booming economy means the dividend is safe

The office real estate market is in favor at the moment. Blackstone Mortgage Investment Trust reported that 100% of its portfolio is performing -- in other words, the borrowers are making their payments on time. As of now, the dividend is 109% covered, which means that funds from operations is 109% of the dividend that is being paid. This is an indication that that dividend is secure, at least as secure as a REITs dividend can be. At a 6.2% dividend yield, Blackstone Investment Trust is a good candidate for any investor's income portfolio.