Please ensure Javascript is enabled for purposes of website accessibility
Log In Help Join The Motley Fool
Free Article Join Over 1 Million Premium Members And Get More In-Depth Stock Guidance and Research
By Evan Niu, CFA - Feb 20, 2020 at 9:30AM

Under an extremely optimistic scenario, the meal delivery kit company could fetch just 1/20th of its $2 billion valuation from 2015.

An influx of capital into the private markets in recent years has reshaped the investing world, for both public and private investors alike. With ample sources of capital, companies are staying private longer while fetching bubbly valuations in pursuit of unicorn status. That also means that for successful companies that end up going public, venture capitalists and other private investors are able to capture relatively more of that underlying value creation. For the unsuccessful companies that may have been overhyped, public investors can be left holding the bag.

Blue Apron (APRN 21.52%) may have just become the poster child of that latter phenomenon. 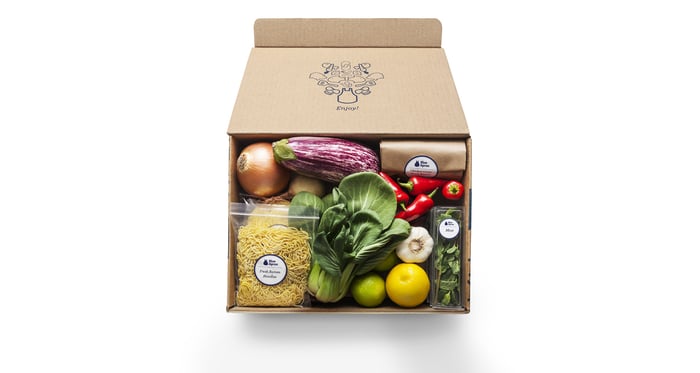 Blue Apron is running out of cash

Announcing dire fourth-quarter results this week, the meal delivery kit specialist also said that its board of directors is now "evaluating a range of strategic alternatives to maximize shareholder value," which is a common euphemism for companies trying to sell themselves or pursuing other possible outcomes like a merger or capital raise. Blue Apron will also shutter its facility in Arlington, Texas, and consolidate meal kit production at its other facilities in New Jersey and California in an effort to cut costs.

Revenue in 2019 fell by 32% to $455 million and the company posted a net loss of $61 million last year. That decline was primarily driven by Blue Apron shedding nearly 40% of its customers throughout 2019. The only operating metrics that improved were orders per customer and average revenue per customer, but those gains were modest and not nearly enough to offset broader weakness in the business.

Blue Apron finished the quarter with just $43.5 million in cash and cash equivalents. When the company when public in early 2017, it raised $300 million and was valued at $1.9 billion. The IPO represented a downround compared to the $2 billion private valuation it had fetched in 2015. Blue Apron's market cap has now dipped below $50 million -- less than its $53.5 million in long-term debt. 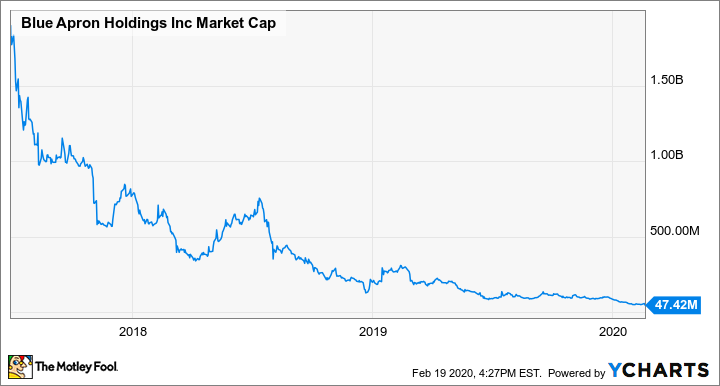 "But at this point, for us to fully execute the plans that we've talked about, we do need to raise capital," CFO Tim Bensley said on the conference call with analysts. "And that's one of the reasons why we've announced our pursuit of ... the strategic alternative process that we talked about earlier on the call."

It's worth recalling that public investors were immediately skeptical about Blue Apron's prospects, in part because Amazon made it clear just weeks after the IPO that the sprawling tech giant would expand into meal kits in short order. Amazon had announced its Whole Foods acquisition shortly before Blue Apron went public and filed meal kit trademarks promptly thereafter. Blue Apron shares tanked as soon as they hit the public markets.

At $50 million, Blue Apron is worth just 1/40th of its private valuation. Even if the company is somehow able to fetch a 100% acquisition premium -- which would be generous considering the current state of the business -- that'd be 1/20th of the $2 billion valuation. The unicorn bubble is bursting, and recent debacles like WeWork's scuttled IPO suggest the process isn't over yet.