Dividend investors should pay attention to this very familiar name.

Sometimes, shares of consumer goods multinationals behave like tech stocks, just to see how the other half lives. Over the last 12 months, chocolate bar manufacturer The Hershey Company (HSY -0.26%) has generated a total return of 51%, trouncing the S&P 500 Total Return Index performance of nearly 25%.

The company has undertaken transformative steps to diversify revenue beyond its mainstay chocolate business over the last three years. In 2018, Hershey spent $1.3 billion to acquire Amplify Snack Brands (the maker of SkinnyPop popcorn and Paqui tortilla chips) and Pirate Brands (which owns the Pirate's Booty puffed rice and corn snack line). Hershey also acquired ONE Brands, a manufacturer of low-sugar, high-protein snack bars, in September 2019 for approximately $400 million.

The expansion into snacks and "better for you" categories like protein bars has helped Hershey thrive within a flattish environment for consumer packaged goods (CPG) manufacturers. In 2019, acquired revenue contributed one percentage point to Hershey's 2.5% top-line improvement (revenue reached nearly $8 billion for the year). 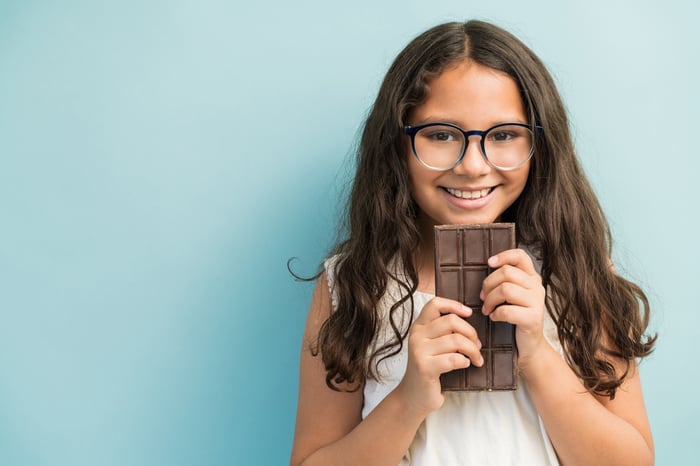 Supplementing growth via strategic business purchases is a relatively new direction for Hershey, and while successful, the journey hasn't been painless. For example, the company's first tie-up in this vein, its 2015 acquisition of premium beef jerky maker Krave Pure Foods for $235 million, has underperformed. Hershey took a charge of $107 million against intangible assets associated with Krave in the fourth quarter of 2019, as rising competition in the premium jerky market is thwarting the brand's growth.

During Hershey's fourth-quarter 2019 earnings conference call in late January, management explained that in retrospect, Krave didn't fit the typical profile of high-margin, scalable companies Hershey would like to acquire, but that the experience of running Krave has provided executives with important takeaways for future acquisitions. (Current CEO Michele Buck was appointed to the position in 2017; Krave was purchased by her predecessor.)

The company began passing through price increases in 2019 in its confections portfolio, and this sticker power has helped offset other headwinds. For example, in the fourth quarter of 2019, a 3.6-percentage-point revenue benefit from pricing offset a 1.7-percentage-point dip in volume, ensuring top-line growth during the period. The company anticipates that it will achieve between 2% and 2.5% confections price realization in 2020.

Hershey has also recently stepped up marketing spend for variants of its biggest chocolate brands, such as the Take 5 candy bar, which was the subject of the Reese's brand's first-ever Super Bowl ad in February 2020.

Unlike some of its larger competitors, Hershey doesn't display a rabid appetite for international sales. The organization slowly and judiciously moves into foreign markets. Non-North American sales make up just 11% of the organization's top line.

Nonetheless, paced by Hershey's "strategic focus" markets of Mexico, Brazil, India, and China, international growth has been brisk, improving by 5.4% on a year-over-year, organic basis in 2019 -- quadruple the pace of North American revenue growth.

As for risks, the most prominent vulnerability for investors to track is the company's sensitivity to cocoa prices and cocoa supply, given its chocolate focus. Hershey tends to manage its price risk through hedging activities, but any disruption in its supply chain could harm revenue. Currently, 70% of the world's cocoa supply derives from West Africa. The COVID-19 outbreak provides a good illustration of the travails manufacturers can experience when their supply chains are concentrated in a single country or geographic region.

A stock geared toward income investors

Want a dividend check you can bank on, quarter in and quarter out? In January, Hershey declared its 361st consecutive quarterly dividend, which now yields 2% on an annualized basis. The chocolatier has raised its dividend at an impressive compounded annual growth rate, or CAGR, of roughly 8% over the last three years.

Signs also point to a continuation of sustainable, rising quarterly payouts ahead. Hershey's trailing-12-month free cash flow has improved by 90% to $1.4 billion over the last three years, while earnings per share have doubled, helping to cut the company's payout ratio in half over the same period, to a moderate 39%.

For income investors, Hershey's reluctance to jump into every last product or geographic market is a desirable trait. The consumer staples giant's core revenue is generated by a set of high-consumption brands that have weathered the test of decades, including Reese's, Hershey's Kisses, Almond Joy, Jolly Rancher, Kit Kat, Heath, and Bubble Yum.

Thus, the company's revenue base is highly stable, and in most years, simply requires solid execution to grow. This persuasive combination of stability and growth potential is buttressed by an annual operating margin of 21% -- one of the highest operating margins among Hershey's CPG peers.

Hershey currently trades at 26 times forward earnings -- a steep premium to fellow S&P 500 companies in the consumer staples sector, which are priced at 18 times forward earnings in the aggregate. However, even if Hershey encounters some profit-taking ahead, it's likely to retain a premium against the broader market in a correction, especially one in which investors run to defensive stocks for cover.