These three metrics reveal the strength of the tech services organization's business model.

Shares of IT consulting specialist Globant (GLOB 5.24%) raced higher by 5% in Friday afternoon trading following the release of the company's fourth-quarter 2019 earnings report. Globant has enjoyed a stellar ascent in the markets recently as its stock has appreciated 94% over the last 12 months.

In the fourth quarter, the tech company reported year-over-year revenue growth of nearly 32% to $184 million, and net income of $13.5 million during the period. Below, let's look at three metrics that demonstrate why Globant is drawing such intense and sustained interest from investors.

Globant finished 2019 with 11,855 "Globers" (employees) in its ranks. Of these, 11,021 were IT professionals working within the broad categories of innovation, technology, and design. This represents a jump of 41% in the company's consultant tally versus year-end 2018.

This rapid expansion of Globant's workforce illustrates current demand for its services in "digital and cognitive transformation" and other more mundane IT tasks. But it also represents a huge amplification of capacity for future work under the company's time and materials contracts with its clients. For tech companies like Globant that sell outsourced talent (versus software), revenue growth depends on having ready capacity on hand for new projects.

To this end, Globant's hiring spree is focused on billable employees. Similar to last year, the ratio of consultant employees to the total workforce at the end of 2019 stands at roughly 93%. 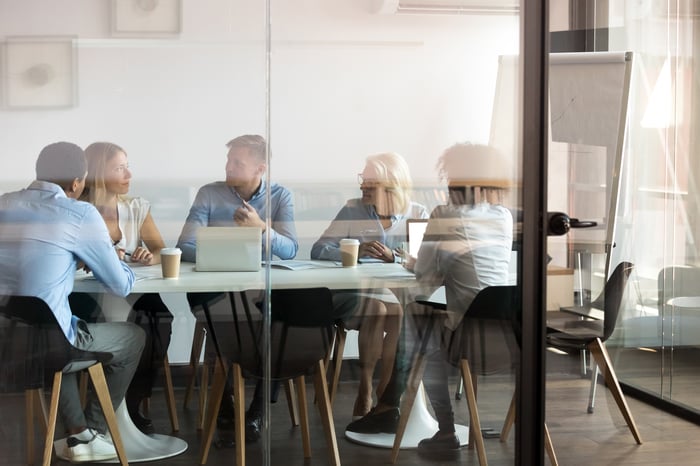 2. A plethora of higher-value accounts

Globant boasts a current base of 822 customers -- more than double the 373 customers it maintained in 2018. While the company is actively prospecting new clients across a variety of industries, including entertainment, media, technology, financial services, and healthcare, it's also striving to expand roles within some of its deepest-pocketed buyers.

The company's steady accretion of high-value accounts indicates that over the long run, it can pursue a relatively smooth growth path simply by increasing business within Fortune 1000 clients. Qualitatively, Globant's number of accounts in excess of $5 million and $10 million showcases its ability to become an almost indispensable resource within behemoth customers that prioritize digital transformation. Globant may still rely a bit too much on its largest customer, however: The organization derived 11.7% of its revenue from Walt Disney in 2019, up 80 basis points from 2018.

One of the traits that distinguishes Globant from other young, fast-growing tech companies is its solid and consistent profitability. The corporation generated a net profit margin of 21% in 2019, and its bottom line has been supported by an abundance of gross profit dollars.

Even though Globant's adjusted gross margin dipped a slight 20 basis points to 40.4% this past year, gross profit dollars soared 25% over 2018 to $254 million. Because the company prices its services at fixed hourly rates, it enjoys a sort of built-in discipline over its cost of sales. Thus, when sales rise, gross margin remains steady, so the total amount of gross profit increases.

Ample gross profit in 2019 helped cover a 30% jump in overhead, as Globant increased its selling, general, and administrative expenses to market its services and beef up its consultant workforce.

As a result, the organization booked net profit of $54 million in 2019 against $51.6 million in the prior year, even as it engaged in significant billable workforce expansion. In other words, Globant has demonstrated a scalable business model that produced top-line growth in excess of 26% in 2019 while still bumping up net profits. Not many growth-stage tech companies can assert the same.