Microsoft's (NASDAQ:MSFT) cloud business is firing all cylinders. Revenue from Azure cloud grew 59% in its fiscal 2020 first quarter, which ended Sept. 30, and the company landed a multiyear $10 billion cloud contract with the Pentagon.

Investors have responded to Microsoft's cloud-based success by sending its stock 15.7% higher so far in 2020. That rise comes on the heels of an impressive 55% gain in 2019. With a market capitalization of about $1.4 trillion, Microsoft is among the most valuable public companies in the world.

But that Pentagon contract, which has been helping to drive the share price upward, is now under threat, which adds a touch of reputational, growth, and stock risk into the Microsoft cloud story. 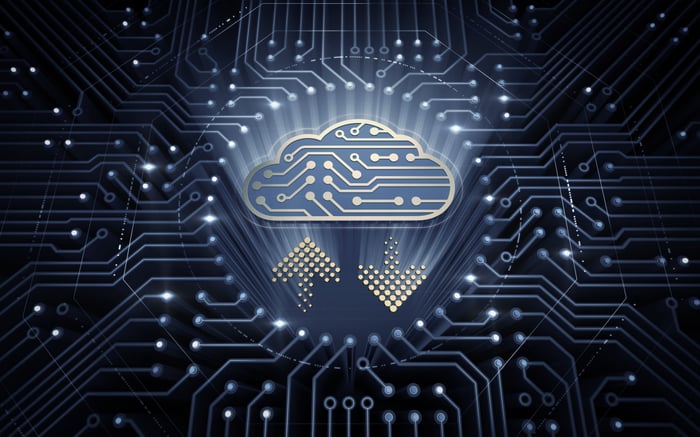 The Joint Enterprise Defense Infrastructure -- or JEDI -- cloud contract is part of the Pentagon's efforts to digitize its computer systems and consolidate down to fewer cloud services providers. Work on the $10 billion project, won by Microsoft, will be spread out over several years. But Amazon has filed a lawsuit contesting how the Pentagon awarded the contract to Microsoft, and last week, a federal judge granted Amazon's (NASDAQ:AMZN) request to place a temporary hold on Microsoft's work on JEDI.

The contract had long been expected to go to Amazon Web Services (AWS), which already has a cloud deal with the Central Intelligence Agency and is by far the leader in the market. But Amazon CEO Jeff Bezos is a frequent target of President Donald Trump's ire, and in August, the White House began examining Amazon's bid. The contract was awarded to Microsoft in late October, prompting Amazon to cry foul, asserting in the courts that political bias prevented AWS from landing the lucrative deal.

Amazon Web Services wants the Defense Department to void Microsoft's contract and reevaluate the other proposals submitted. Amazon disclosed in court documents that it's looking to depose Trump, Defense Secretary Mark Esper, and former Defense Secretary James Mattis as part of its case. The judge taking the added step of issuing an injunction implies that she sees some merit to Amazon's argument. In its court filing, the company argued that the Defense Department committed several errors, including "downplaying gross deficiencies and failures in Microsoft's proposal and demonstrations" which ultimately resulted in it awarding the JEDI contract to "a technologically inferior proposal that did not present the best value to the Government."

Microsoft's reputation could take a hit

News that the judge thought Amazon's case had merit, at least for now, spooked investors and sent shares of Microsoft lower. But the risk is wider than a single contract's revenue.

For starters, consider Microsoft's reputation. Much of the market's recent love for it has been driven by its cloud computing business. After it was written off as a tech has-been, Microsoft reinvented itself as a leading cloud services provider. While it remains in a distant second place to AWS in cloud services market share, it has been methodically chipping away at the leader's dominance.

Landing this contract with the Pentagon elevated Microsoft's cloud services credibility -- if it's good enough for the Pentagon, then it must be OK for corporate America. But if the courts conclude that Microsoft wasn't the best contractor for the job after all and only landed the deal through political interference, that could hinder its efforts to land other contracts, both public and private.

In its court filings, Amazon has argued that, in addition to political bias, the Department of Defense "glossed over wide gaps" between the market share position of AWS and Microsoft's Azure when awarding the contract.

Growth may be impacted

The cloud market is projected to grow by 17% to $266.4 billion in 2020. For Microsoft and Amazon, a lot of that growth will come from government contracts, because it's not just the Pentagon's systems that are in need of an upgrade. Throughout the federal government, there's a movement afoot to modernize systems, which could provide vendors with years of revenues and profits.

According to Bloomberg, the White House earmarked more than $87 billion for IT in 2019 and is prioritizing efforts to modernize technology, improve the IT and cybersecurity workforce, increase cloud adoption, and reduce the dangers from hackers and other cybersecurity threats. On the cloud front, Bloomberg estimates that federal agencies spent $4.3 billion in 2018 and more than $5 billion in 2019. The growth rate of that spending is forecast to accelerate this year.

Getting a foot in the door can prove tough when it comes to government contracts, but once a company has won a deal with the Pentagon, landing more becomes a whole lot easier. It's one reason Amazon is fighting so hard in this case. It doesn't necessarily need this particular $10 billion deal to survive financially, but it does want (and need) the reputational boost. For Microsoft, with a market share in the cloud of about 16% (half as much as AWS controls), it matters even more. Landing the JEDI contract sends the message that its offerings can compete head-to-head with those of Amazon. If Microsoft loses it -- or if the controversy surrounding how it was awarded grows -- other government agencies and businesses may think twice before picking Microsoft, hurting its revenue growth.

Cloud wins have been driving the stock

Shares of Microsoft dipped on news of the injunction, although they quickly recovered as the company and the Pentagon moved to allay investors' concerns. Both expressed disappointment about the delay but said they expect the contract to ultimately move forward. If the courts don't agree and Microsoft loses the contract, it could suck some air out of a stock that has been flying high for months.