Please ensure Javascript is enabled for purposes of website accessibility
Log In Help Join The Motley Fool
Free Article Join Over 1 Million Premium Members And Get More In-Depth Stock Guidance and Research
By Nicholas Rossolillo - Feb 22, 2020 at 6:00AM

A shaky 2019 concluded with a bang for the family steakhouse.

It's been rough going out there in the restaurant industry. A wave of consumer interest in delivery services and digital ordering is reshaping how Americans eat out, and a sharp increase in minimum wages across many states in the last year or so has also put pressure on many operations' bottom line. Then there's also the stubbornly ongoing problem of industry over-expansion, a problem that reared its head again at the close of 2019. Researcher Black Box Intelligence reported that average U.S. restaurant comparable sales (or "comps," a blend of foot traffic and guest order size) in the fourth quarter of 2019 were down 0.1% from the year prior -- even as general consumer spending continued to trend higher.

Some of those challenges have taken their toll on Texas Roadhouse (TXRH 1.43%) as of late. The stock ended 2019 down 6%, making it one of my worst holdings for the calendar year as the S&P 500 roared higher by nearly 30%. I used the downtrend to scoop up shares a few times during the year, as I thought the effects -- especially of higher wages -- would start to wear off sooner rather than later. The chain's report for the fourth quarter of 2019 just proved that notion right. 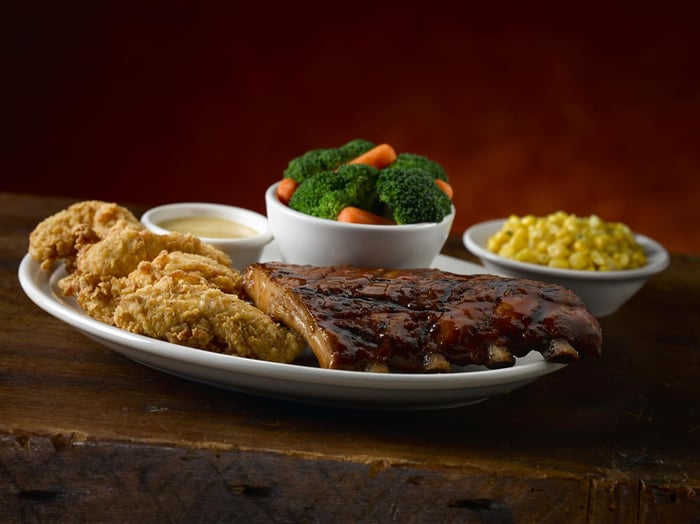 A fantastic way to end a year

Although the majority of 2019 will ultimately go down as forgettable for longtime Texas Roadhouse shareholders, the final report card was glowing. Total sales were up 19.7% to $725 million, driven by 11 new domestic store openings and three international franchises; 4.4% and 3.4% comps growth at company-owned and franchised locations, respectively; and an extra week during the final quarter compared with the same period in 2018. All told, it equated to a 45% surge in earnings per share, more than offsetting the weakness from the first half of 2019.

Full-year comps grew 4.7%, helped by a 1.8% increase in total guest count. Over a month and a half into 2020, comps are up another 6.4%. That flies in the face of lackluster industry averages and continues Roadhouse's clockwork-like ability to drive traffic to its restaurants. Management also expects to open at least 30 new locations in 2020, which includes a few of the still small Bubba's 33 sports bar chain openings, but doesn't include a handful of expected store relocations.

As to the latter point, CEO Kent Taylor said his company has had success with relocations in the recent past, as it has allowed them to increase guest capacity, build larger parking lots, and sign more favorable lease terms. Some of the expected new construction will also be smaller-format stores, but not to worry -- Taylor said the newer small format has been performing as well as, or in some instances better than, the larger real estate.

As is the case with nearly all industry players, labor expense is the largest line item at Roadhouse. A spate of new state-mandated minimum wage increases (plus a voluntary compensation increase for managers and store operators) that started to be enacted over the summer of 2018 had been weighing on earnings. But, where before the expense was outpacing sales growth, labor is now back to a level of growth on par with the top line.

Don't get me wrong, labor will continue to be worth keeping an eye on in 2020. The labor market is tight and Taylor and his top team said to continue expecting inflation in the staffing department. Added to that will be a 1% to 2% increase in commodity prices. The expectation is that about a 2.5% to 3% menu price hike in March will help offset some of the growing expense. However, management said menu pricing will be approached conservatively, with the store operators primarily in mind (since most of Roadhouse's store operators' income is based on bottom-line performance).

In all, Texas Roadhouse's stock is back on the mend and nearing all-time highs previously set back in 2018. With expenses moderating again and the dividend getting boosted by 20% (good for a current yield of 2%), this remains one of my top restaurant stocks for the long haul.