Please ensure Javascript is enabled for purposes of website accessibility
Log In Help Join The Motley Fool
Free Article Join Over 1 Million Premium Members And Get More In-Depth Stock Guidance and Research
By John Ballard – Feb 22, 2020 at 11:06AM

The title that sparked outrage among gamers a few years ago has been completely revamped, and players love it.

Things are going well for Electronic Arts (EA -0.43%). The company has reported back-to-back quarters of robust growth in its live services business, which include revenue from subscriptions and in-game spending. That has the stock up 22% in the last six months.

Meanwhile, Star Wars: Battlefront 2 is receiving praise from critics after EA has quietly updated the title with new content. It's a strange reversal for a title that was thrashed by the gaming community a few years ago over the aggressive strategy to lock much of the game's most desirable content behind a paywall.

This turnaround for the franchise could be giving investors a glimpse of how EA's internal operations have also improved over the last few years, and why the company is experiencing strong momentum right now. 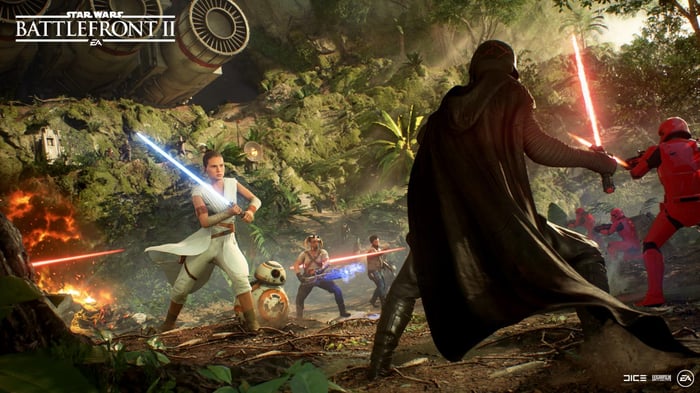 EA has learned from its mistakes

If you have been following EA, you may remember the controversy over Star Wars: Battlefront 2 when it was released in November of 2017. In an attempt to boost sales, EA pushed players to buy loot boxes with the hopes that the desired item would drop, such as unlocking the ability to play as a popular Star Wars character like Yoda or Darth Vader in the game's online multiplayer mode.

This pay-to-win approach was a turnoff for fans. Many didn't buy the game, and sales of Battlefront 2 fell short of EA's expectations that year.

Star Wars: Battlefront 2 is a completely different game today. EA stripped out all the pay-to-win mechanisms and has made all the content available for free. Additionally, EA has added more maps and other content for the multiplayer mode. CEO Andrew Wilson spoke to the momentum the game is experiencing during the fiscal third-quarter conference call.

"Two years and dozens of content updates later spanning all three trilogies and more, critics have rereviewed the game to high scores, player sentiment is exceptional, and the Celebration edition helped to drive performance of Battlefront 2 that was significantly above our Q3 expectations," Wilson said.

This comes on top of the strong sales figures announced for the latest release, Star Wars Jedi: Fallen Order, which is on pace to sell 10 million copies for the fiscal year ending in March. That is better than management's original expectation for sales to reach as many as 8 million copies.

During the recent call, Wilson elaborated by stating that "Star Wars Jedi: Fallen Order was the action-adventure game that fans were looking for this holiday season." He added, "Respawn delivered an expertly crafted, high-quality experience with outstanding gameplay that thrilled players, made many of the game of the year lists, and sold beyond our projections for the quarter."

What's more, other Star Wars games are performing well too. "Our communities in both Star Wars: Galaxy of Heroes and Star Wars: The Old Republic are thriving as well," Wilson said. He explained further that "The power of the Star Wars franchise continues to endure and grow across generations and geographies, and we look forward to continuing our momentum with Disney and Lucasfilm."

Back in gamers' good graces

Battlefront 2 is not likely contributing a lot to the top line, but the improvements to the game reveal a company that has adapted to what gamers want, and that's likely a reason why live services spending across all the company's games soared 27% over the last year to reach $2.8 billion.

Battlefront 2 is currently available at a steep discount to its original $60 price. Players can also access it through a subscription to EA Access, a service that management hopes to drive growth in live services over the long term. The extra content added to the game should serve as a pull to attract more subscribers.

Most importantly, EA seems to have gone a long way to redeem its brand image with the gamers who were outraged in 2017. EA may have dinged its reputation with the design decisions made with the launch version of the game, but that scarred image seems to be fading now.

Battlefront 2 is better, the live services business is putting up big numbers, and that has this growth stock climbing again.