Please ensure Javascript is enabled for purposes of website accessibility
Log In Help Join The Motley Fool
Free Article Join Over 1 Million Premium Members And Get More In-Depth Stock Guidance and Research
By Billy Duberstein - Feb 23, 2020 at 10:15AM

Here’s why it’s a big deal for the company and future of banking.

In its fourth-quarter and full-year 2019 earnings release, financial-technology loan platform LendingClub (LC -1.92%) also announced that it would be acquiring another company. Wedbush analyst Henry Coffey deemed the move "amazing news" on LendingClub's conference call with analysts.

What has analysts like Coffey so excited? This is the first time a new fintech company has acquired a bank -- specifically, digitally native Radius Bank, a branchless bank based in Boston, with about $1.4 billion in assets.

While that may not seem like such a huge deal, it could be. Fintechs came on to the scene a few years ago as potential disruptors to the banking industry. However, many have fallen flat, as regulatory hurdles popped up, credit tightened, charge-offs rose, and legacy big banks upped their game.

However, should fintechs be able to combine what's best about their modern, nimble platforms with the regulatory compliance and access to deposits that banks have, it could make for a formidable combination. Though LendingClub is the first to make the combination by acquisition, private start-up Varo Money just received a bank charter earlier this month after a three-year application process. Fellow fintech Square (SQ -5.52%) is also currently pursuing its own license with the FDIC.

Here's why the transaction could especially be a game-changer for LendingClub's lagging stock price and the industry at large. 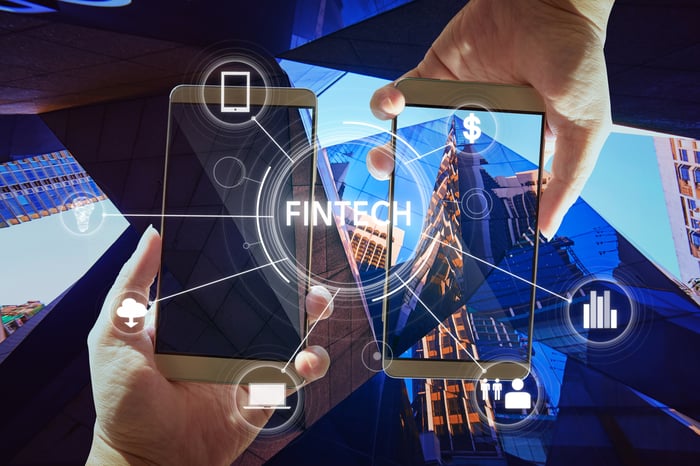 The first fintech-bank merger is on. Image source: Getty Images.

In total, LendingClub will pay $185 million for Radius, with 75% coming in cash and 25% coming in stock. However, to clear the way for regulators, LendingClub also has to pay $50.2 million to current shareholder Shanda, a Chinese investment company that owns 22% of LendingClub shares, in exchange for converting its shares into non-voting stock.

LendingClub should get enormous benefits from the deal should it go through. First, LendingClub will save roughly $25 million per year on fees it currently pays to WebBank, the current Utah bank that LendingClub "rents" essentially as a pass-through entity to make its loans across the country.

In all, this adds up to about $80 million in annual economic benefit for Lending Club alone, which is fairly remarkable since LendingClub is paying only $185 million, or $235 million when including Shanda's payoff. LendingClub also has a market capitalization of just $1.15 billion, with $714 million in net cash and short-term loans held for sale on its balance sheet, for an enterprise value only around $435 million.

In addition, LendingClub will acquire Radius at 1.72 times book value and 28.6 times earnings and will bring in Radius' roughly $1 billion in diverse consumer and commercial loans. While the P/E ratio suggests only about $6.5 million in earnings for Radius, that's really the cherry on top for the deal. Combined, Radius will enable LendingClub to reap all of the benefits, and both companies should be able to meaningfully grow together with the added scale each side brings. In addition, Radius also appears to be a technically savvy operator, and Bankrate recently named it "Best Online Bank for 2020."

Adding to Wedbush's enthusiasm on the call, Oppenheimer analyst Jed Kelly wrote in a report, "We view LendingClub's intention to become a fully digitized bank by acquiring Radius Bank as a meaningful catalyst in unlocking greater shareholder value for its leading personal lending platform." At first glance, I tend to agree.

LendingClub estimates that the deal will take 12 to 15 months to close, and regulators are notoriously difficult with bank mergers. Nevertheless, should it come to fruition, the combination would create a new type of financial institution that combines the fintech's leading customer acquisition and data-driven underwriting platform with Radius' deposit-gathering skills. LendingClub will still be selling 90% or so of its consumer loans through its platform to third parties, so it will still retain that "platform" status and won't totally resemble a bank.

In this way, LendingClub is hoping to become a new kind of hybrid that retains the advantages of being a loan platform while also bringing in the advantages that come with traditional banking, most notably low-cost deposits and lower compliance costs.

Is it the right mix? That remains to be seen, but one thing is for sure -- at least on traditional metrics, the combined company will be extremely cheap, should the deal go through and promised synergies come to fruition.