Please ensure Javascript is enabled for purposes of website accessibility
Log In Help Join The Motley Fool
Free Article Join Over 1 Million Premium Members And Get More In-Depth Stock Guidance and Research
By Timothy Green - Feb 24, 2020 at 9:56AM

Investors were in panic mode as the coronavirus outbreak escalated.

As the coronavirus outbreak that originated in China continues to escalate, the Dow Jones Industrial Average (^DJI 1.05%) was down big on Monday. The Dow had shed more than 700 points by 10:15 a.m. EST, good for a 2.5% decline.

Apple (AAPL 1.62%) and Boeing (BA 2.28%) were two of the Dow's bigger losers, both stumbling a bit more than the index. An optimistic analyst sees Apple's supply chain problems in China lasting until at least April, which didn't help the stock on Monday. Meanwhile, Boeing is reportedly dealing with a widespread debris issue with its grounded 737 Max.

Apple is dependent on the iPhone and other gadgets for the bulk of its revenue, and it's dependent on China for much of its manufacturing. The coronavirus outbreak has upended the tech giant's supply chain in the country, with suppliers slow to ramp up capacity and meet demand. Along with depressed demand for Apple products in China, the supply chain woes led the company to withdraw its second-quarter guidance earlier this month. 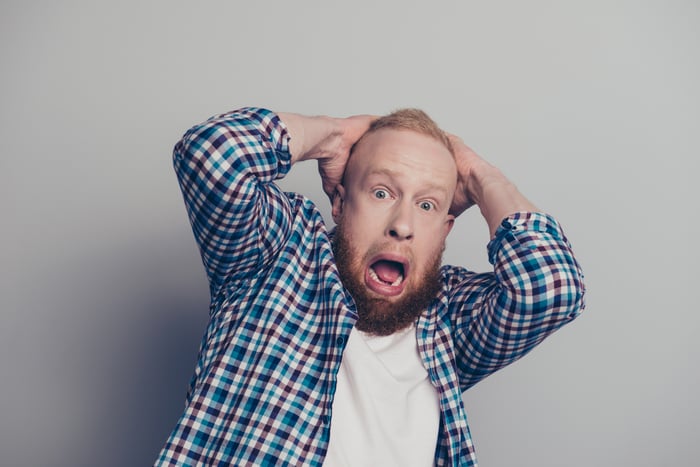 How long will these problems persist? Analyst Daniel Ives of Wedbush, who rates the stock "outperform," doesn't expect Apple's supply chain to return to full capacity until April at the earliest. That's the best-case scenario, according to Ives. The base case is a return to full capacity in early May, and the worst case delays that return until June, late enough to impact the iPhone launch later this year.

Of course, the real worst case is probably a lot worse than that. The coronavirus has still not been brought under control in China, and it's beginning to infect significant numbers of people in other countries. Even if the supply chain is fully up and running within a couple months, demand for Apple products could start to take hits outside of China.

Shares of Apple were down 3.3% Monday morning, a bit more than the broad stock market indexes. The stock is still up about 75% over the past year, but those gains will likely be tested as the coronavirus outbreak continues.

Boeing stock was down 2.8% Monday morning, falling along with the Dow. On top of coronavirus fears, The Wall Street Journal reported late last week that the airplane manufacturer had found debris in the fuel tanks of most 737 Max planes that it had inspected. This suggests that the problem is deeper than originally thought.

Boeing has found tools, rags, and other debris left inside the planes by workers, a problem that has cropped up at multiple factories. These issues may not further delay the recertification of the 737 Max, which was grounded following two fatal flights caused by a software problem, but it certainly doesn't inspire confidence in the company.

Along with these production problems, federal prosecutors investigating Boeing are now probing whether the company knowingly misled the Federal Aviation Administration, according to a report from The New York Times. The focus is on whether a top pilot for the company intentionally lied about the flight control system at the center of the 737 Max scandal.

Even if the 737 Max does return to service in the coming months, this debacle will likely cast a shadow over the company for years to come.